Under the heading of river trips, we cover everything from tiny steep spate becks high in the hills that need heavy and continuing rain to bring them into condition to slow-moving lowland rivers (think of the Tees below Yarm) and sheltered flat water. Paddling on lakes starts to blend into sea kayaking, if people choose to use that sort of boat, but on a relaxed lake trip you'll often find a compete mix of every type of boat.

On whitewater rivers, equipment is more typically the modern, short, brightly coloured plastic kayak you'll see in many of the photos on the site. These are highly manoeuverable boats capable of being paddled and turned quickly to avoid rocks, hydraulics and other hazards, but also great fun to play in on river features like waves and drops. There's quite a range from very short playboats intended to exploit the features of waves to do entertaining tricks, up to high-volume creek boat designs aimed to ensure maximum safety and control on very serious and hard rivers. Rotomoulded plastic construction makes these boats very resistant to damage from rocks and other obstacles that are common in the fast shallow rivers of upland Britain. On all but the steepest and narrowest rivers you may also see boats paddled from a kneeling position with a single blade paddle. These range from plastic playboats looking remarkably similar to many kayaks, through short rodeo boats to more conventional Canadian Canoes whose design owes a great deal to the birch bark canoes used by native North Americans, though almost all are made of much more robust (and mass-produced) materials. 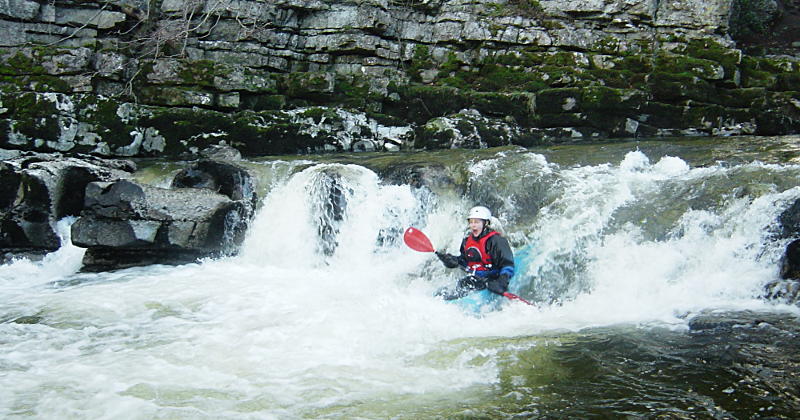 Moving water is covered by a grading system running from I (barely moving water of low gradient) to VI (water paddled only by experts at the limits of safety and only at a very limited range of levels, still with a very considerable risk to life and limb). This leaves only grades II, III and IV on which you will frequently find SOC paddlers, which doesn't distinguish clearly between what is really quite a wide range of difficulty. One obvious reason for this is that rivers change out of all recognition as the level changes. Some small technical rivers get easier as the levels go up, whilst most rivers get harder, or at least, less forgiving of errors. On all rivers, the consequences of any mishap tend to be more serious in higher water levels. So the grades are at best a vague guide to what to expect of a river and there is no substitute for experience of what the grades can mean in your particular paddling area. Be under no illusions that a grade III river in the alps is in any way similar to a grade III in Yorkshire !

Canadian open canoe on easy water - The Tees below Yarm

The pages in this section are intended to give you an idea of what to expect from the rivers that SOC paddles, what type of equipment is used, and how SOC trips are organised to ensure both enjoyment and adrenaline, without compromising on safety. As well as guidance, there are plenty of write-ups and photographs under the Previous River Trips heading in the navigation panel, whilst many of the rivers we expect to put in the programme on a regular basis, or paddle often as fallback trips are described in the Favourite River Trips section of the site.