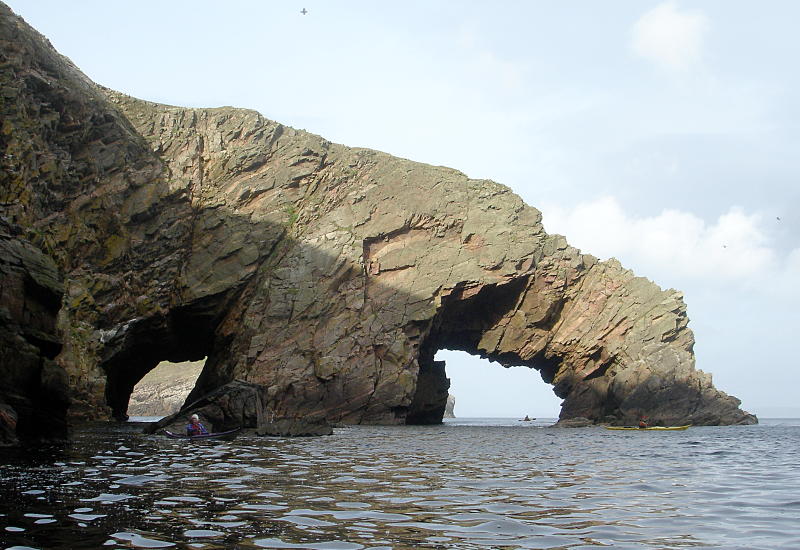 Sea arches are an obvious attraction to the sea kayaker - Shetland has lots!

Rockhopping is one of the "games" that attracts certain sea kayakers. At one level, it's a game you can play in the course of an ordinary trip, but this will often involve you in paddling quickly to catch up with the group who don't wish to join in. At another level, all the paddlers on a trip will be involved, and this does mean that you have people to watch out for you if the stakes start to get higher. 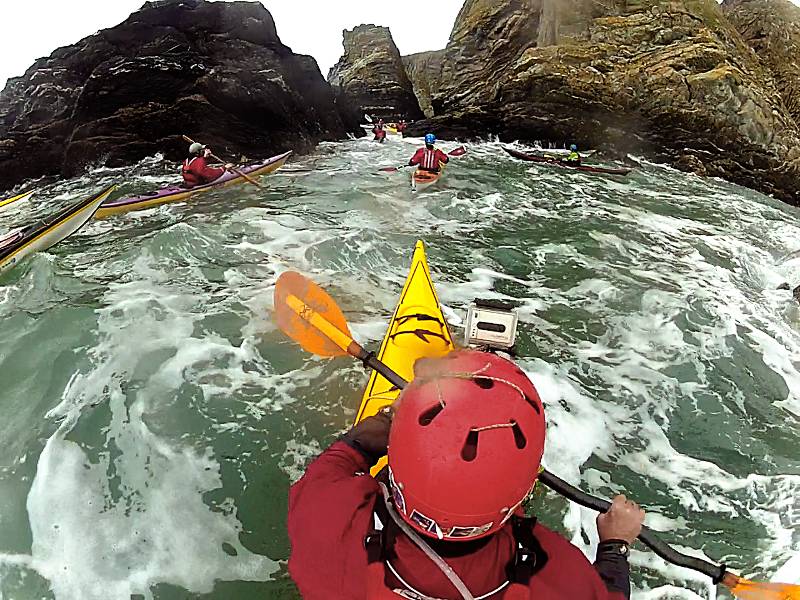 Nipping behind a series of stacks on Anglesey's west coast

Much of the appeal of sea kayaking is that such small, manoeuvrable, shallow-drafted boats can get to places that no other boats can, whether it's close to cliffs and wildlife, into sea caves, or through arches and caves and behind stacks. However, getting closely involved with the sea/land interface is not without its risks, especially with an onshore wind or any significant swell. Groups rockhopping together will always be keeping an eye out for each other, venturing through the narrowest gaps one at a time and always giving themselves enough sea room - a clear route to safety if a bigger set of waves come in or a companion needs a tow after an upset. 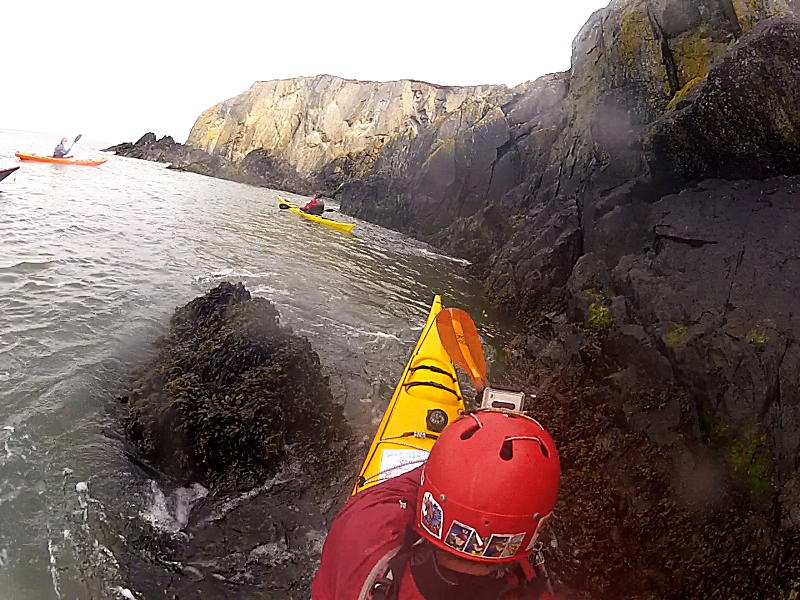 With barnacle-encrusted rocks, shallow water and plenty of wave-action, helmets are also essential, and some may consider more of the white-water kayaker's armoury like elbow pads or gloves. Breaking paddles is not unknown, so a good set of splits is always a good idea, as is a repair kit, and the knowledge and confidence to use it when there is nowhere to land.

Caves can be great fun, but remember that in any swell, you may need plenty of headroom. Some caves give through routes - sometimes enabling you to bypass more exposed waters on the outside of a headland. 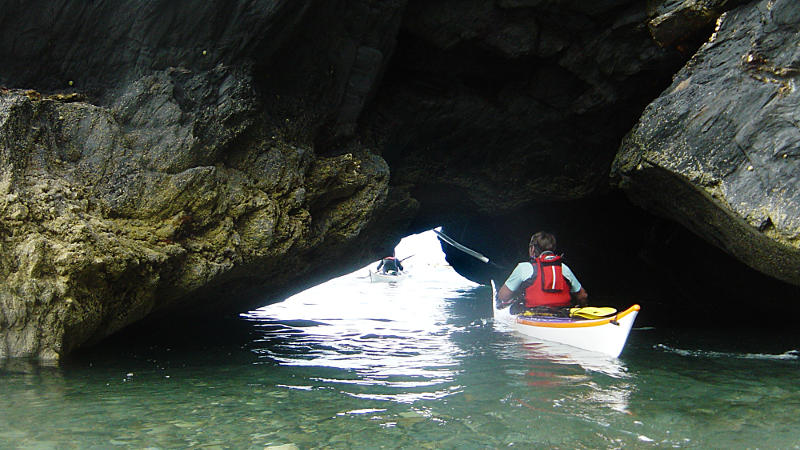 Other caves will head back into darkness - often with the ominous sound of surf crashing into unknown rocks inside or making mysterious and eerie glooping sounds. It's often a good idea to paddle backwards into caves, so you can keep an eye on the sea for bigger waves approaching, and so you can paddle out quickly - turning round is often not an option. 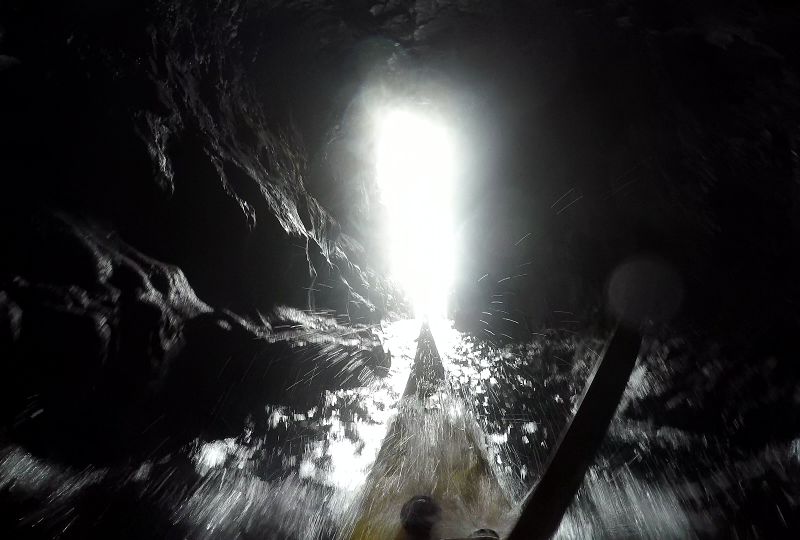 A bigger set made life slightly exciting right at the back of this dark cave under Wiay off Skye's west coast. Photo: Andy Waddington

Beware that geos and caves can concentrate the waves and what was a manageable swell outside can result in crashing surf inside with no exit, so watch for a while before venturing in - have you seen the biggest waves yet? 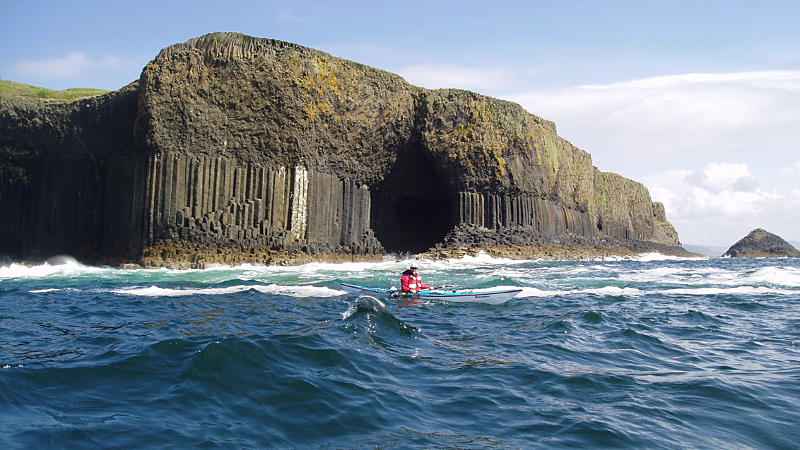 Fingal's Cave on Staffa on a big swell day - no entry!