On an extra-schedule walk, three of us (DW, RK & I) glanced at the solar panels on my roof, sparkling in the sunshine, as we climbed up the West Field to the water trough. We wondered if this was the spring that provided the (lead) piped water to Richmond in 1583? Does anyone know? 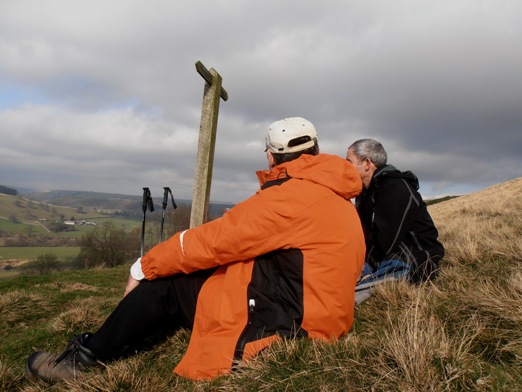 Next we passed the Lady of the Lambs, surveying the progress of her huge new underground gym (ALLEGEDLY - as I only skimmed quickly through the planning notice) and entered Whitcliffe Woods to the sound of chirping sparrows on our way to Clapgate Gill footbridge.

From a peaceful Marske we cut down to the river and through a well-made stone stile that has been freshly built since last autumn. Top marks to the farmer for that: he must know that I avoid adjacent gates whenever possible!

We cut up before Downholme to the White Earth vantage point for lunch & a look at the medieval field plan of the village as drawn by Fleming...... And at the How. I was forced to concede after MONTHS of dispute that maybe it isn't a round Silbury Hill-like structure and that it really was the ridge I had seen last September as we were walking back from Marrick. Oh well, I can't be right all the time.

As we set off again some nasty looking weather approached from up the dale and we set off at a clip. Surprisingly it veered off up Walburn Gill rather than following us and we were blessed with some more watery sunshine before descending the steps back to my house. A few drops of rain scattered the townies among us..... as I stepped back in to my power station home to find out how much electricity I had produced - oh, did I mention: I've just had solar PV installed!?!

Many thanks to Ron & Doug who followed my lead well (often from in front, as Doug pointed out) and I hope they enjoyed the walk as much as I.