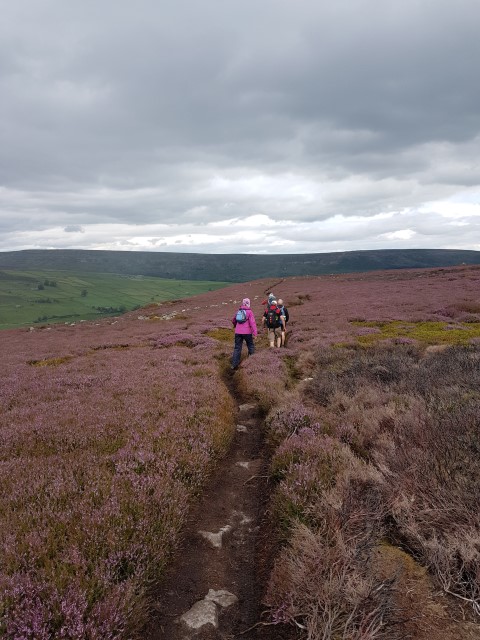 How best to describe this weekends intrepid walkers?  Leading the pack and showing us how it should be done were a couple of hardened veterans, a replacement but well travelled leader and his Alpine walking buddy, plus some regular companions and thrown into the mix a couple of newbies who obviously didn't take the whole experience too serious - it's a story in the making!

Setting off full of eager enthusiasm, the eight explorers began their journey at Grinton Youth Hostel. In the lowlands, the view of hundreds of tents and caravans prepared us for the onslaught of extreme cyclists who would be whizzing past on the treacherous gravel paths that criss cross the moorland.

Dressed for the occasion the newbies would be easily spotted and rescued if necessary with pink hats and coats, which when the weather smiled with sunshine were removed for short periods of time!

Heading for the ancient lime kiln ruins, the pack were already splintering into fitness groups or how we like to put it - those at the front on a mission and those at the back enjoying the beautiful scenery (or perhaps it was the uphill pull, that slowed us down a tad).

Spits of rain did not dampen our spirits as we were regaled with history and geology facts to keep us all motivated and moving.

After a brief but rather windy stop we were trotting off again across the beautiful, heather clad moors spotting the odd grouse here and there who were obviously making the best of their last few days of freedom.

Lunch was a birthday treat with whiskey laden cake being handed around - a
definite boost to morale and the ever extending moorland that just kept on going and going and going.

The next stage of the walk found the newbies striding ahead, the cake had obviously had the required effect and time lost on the early half was soon made up. More whiskey cake was demolished and the end was near - Grinton YHA spotted on the horizon.

Navigation across hard to see, narrow and overgrown paths did not daunt our pack leader and apart from the odd 'planned' detour we arrived safely at base camp.  The newbies had survived the 10 mile walk, savouring the well planned, motivational 'Cake'.

We are now wondering what delights we will be showered with on our next outing with SOC!

From the Happy, Smiley Walkers - Nadja and Amanda