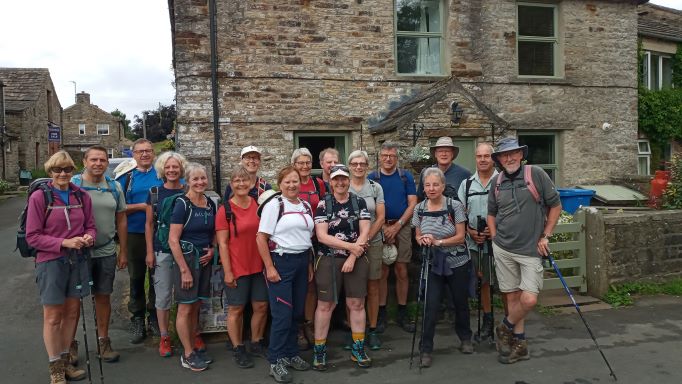 Back in November 2019 at the Walking Section annual meeting Chris Barraclough, a member of both the SOC and the Richmond Norwegian Twinning Association floated the idea of both groups joining forces to host visitors from Norway in 2020.  Richmond’s twin town Vinstra, part of Nord-Fron Kommune lies in the Gudbrunds Valley, around 150 miles north of Lillehammer so, as you might imagine, the folks who live there are keen walkers.

The previous format of the Town Twinning has, over recent years, led to lesser numbers being involved from the town, and indeed from our counterparts in Norway, and the idea behind the 2020 event was to base things rather more on the outdoors aspects of Richmond and the surrounding countryside.

Of course, the visit never happened in 2020 so, after a two year wait, 11 visitors arrived from Norway on Thursday 14 July 2022.  The Norwegians had booked themselves into Grinton Youth Hostel for the weekend to immerse themselves fully into Swaledale and stayed with hosts for the remaining 3 nights of the visit.

On Saturday morning, a group of 11 Norwegians and 6 members of RNTA, led by Geraint, set off from Grinton youth hostel at 10.30 for a walk to Reeth via Marrick, Fremington Edge and Arkengarthdale – the focus being “pastoral Swaledale” as a contrast to “wild Swaledale” the following day.

After a brief stop at the Cathedral of the Dales, where Geraint set the group the challenge of later finding the squint in the chancel – not fulfilled as far as is known; possibly the result of spending time in the Bridge Inn when they should have been doing their research – we walked along the bank of the Swale and through the fields to Marrick Priory [more ecclesiastical history] and up the Nunnery Steps to Marrick.  Along the way, Geraint flunked various questions about breeds of cattle and the overwintering of stock, and learned [from Ron] that the reason for the wire fencing along the top of some drystone walls is to stop sheep climbing over!

We spent a little time in Marrick, picking out the signs that it was once a self-contained, self-sufficient community – blacksmith’s shop, post office, pub, and so on – before heading on to the moor and the back end of Fremington Edge.  From here the Norwegians were able to appreciate the nature of the dale, the small size of its settlements and something of its industrial past.  While Geraint and the members of RNTA sought desperately for shade for a lunch stop, many of the visitors took the opportunity to indulge in some sun-bathing.

A steep diagonal descent of the Edge took us down to the lower reaches of Arkengarthdale - difficult to present the beck as one which swept away footbridges higher up its course in the winter; but delighted discussion of the use of the same word to describe a small watercourse in both English and Norwegian – and so back to Reeth.  In the warm sunshine the village and its greens looked their best, and gave us the opportunity and excuse for an ice cream at Cuckoo Hill View ice cream parlour.

The group then visited the Swaledale museum where curator, Helen, gave us a warm welcome and a short history of the area.  She showed us some typical local artefacts: a lump of galena, a knitting stick (known as a goosewing) and an oil can made from a cocoa tin!

On Sunday the visitors were taken by minibus to Gunnerside for a walk led by Geoff W accompanied by 9 members of SOC.   The day was a little overcast but still quite warm.  We left the village on a steep grassy path up on to Melbecks Moor passing through sheep farming and onto grouse moor where we had a coffee stop alongside a grouse butt.  We continued over the moor where there was a cool breeze, passing the remains of Moor House farm and made our way to Level House and along Hard Level Gill to the peat store where we had lunch overlooking the smelt mill at Old Gang.  At Surrender Bridge we stopped to explore the smelt mill before returning to Gunnerside via Blades and Low Row Pasture on part of the Swaledale marathon route.

The sun came out as we returned to Gunnerside and we enjoyed refreshments outside the pub.  Whilst SOC members were bemoaning the fact that the beer was more than £4 per pint, the Norwegians were thrilled it was so cheap as it is around the equivalent of £10 per pint in Norway!

The Norwegian visitors loved the walk and were interested in hearing all about the history and geography of the area from Geoff.  For the SOC members it was equally interesting to chat with the visitors and to hear about life in rural Norway

The visitors returned to Richmond mid-morning and were met at the Town Hall by Pat and Ron and members of the RNTA.  The sun was shining and the temperature was already soaring when we set off on the Easby Loop.  This was an ideal walk for a hot day as we took the riverside path along to Easby where the Norwegians explored the abbey and enjoyed the coolness of the church before returning via the old railway line for a fish & chip lunch at the Station.

The hope is that the future of the Twinning arrangement might be linked more to the shared love of the outdoors, and that people getting involved in the visit this year might be interested in taking part in a return visit to be hosted in Vinstra in Norway in 2024.   To that end, Arne Skuterud, Chris’s counterpart in Vinstra, presented the SOC with a guidebook (in English) of The Pilgrim Road to Trondheim.  People have walked the more than 600km medieval pilgrim road from Oslo to Nidaros Cathedral for over 500 years to visit the place where St Olav – King responsible for much of the conversion of Norway to Christianity – was believed to be buried.  Arne wasn’t suggesting we tackle the whole route but a section of it passes through Vinstra so it might be an idea for the return visit.