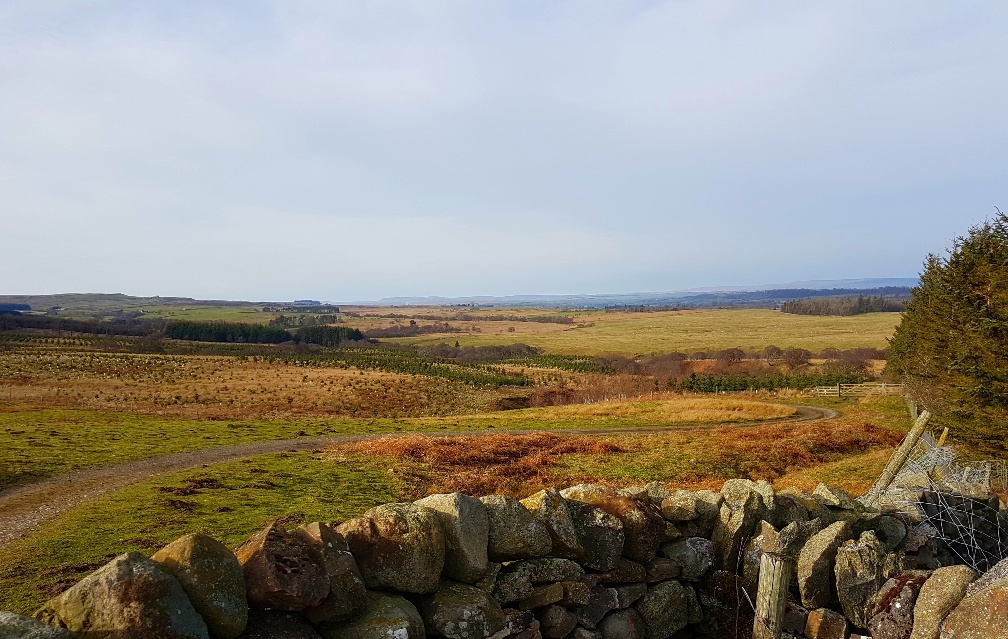 Barningham Moor and the Stang

Valentine’s Day and twelve of us assembled for one of my favourite walks which was postponed from last year’s programme because of the “Beast from the East”. Not this time. The weather was glorious, perhaps unseasonably so but no complaints. Glenys distributed Valentine biscuits and I reminded the ladies of the group that if they were to surreptitiously drop their cards into my rucksack during the course of the day that would be fine. Hope springs eternal.

The walk itself follows the line of Badgers’ Way which climbs onto the moor and runs alongside the moorland wall. Fortunately, conditions were reasonably firm underfoot. Coffee was taken at the cairn, which is one of many ancient sites in this area, and it offered spectacular views across to the northern hills. A few hundred yards further along the path the route veers right along a broad green trod which I missed but was speedily put right by Graham Moss. Adjacent to the path lies Barningham’s own “Henge” (see below); a small circular enclosure which looks down the gill. Its structure and location points to a ceremonial site of the Bronze or early Iron Age period but it is not identified on the OS map. This feature fits into a landscape of identified circular huts and “cup and ring” markers.

Walks are all about sociability. Conversation abounds; some light; some serious; some utterly bizarre and I never ceased to be amazed by the range of subject matter. Today’s offerings, for instance, included “the socialisation of gender roles”; do we/should we iron our underwear; inevitably rugby Six Nations – bring on the Welsh; alternative careers (I always fancied being the Bishop of Bath and Wells). There are other snippets which are not publishable.

Our path then took us down to Blackgate and the entrance to the extensive Stang plantation and onwards to East Hope. There we had a leisurely lunch in warm sunshine. The return leg is just a matter of following the trackway out of the plantation and onto the lane that leads gently down to Barningham. The final stage of the walk took us along the back lane and passed the restored and impressive dual limekilns, another place to pause and talk. We then took a path up the crofts into the village and back to our starting point. Refreshments were taken in the lounge at the Morritt Arms. Very civilised. I excitedly explored my rucksack. Nothing. Absolutely nothing.