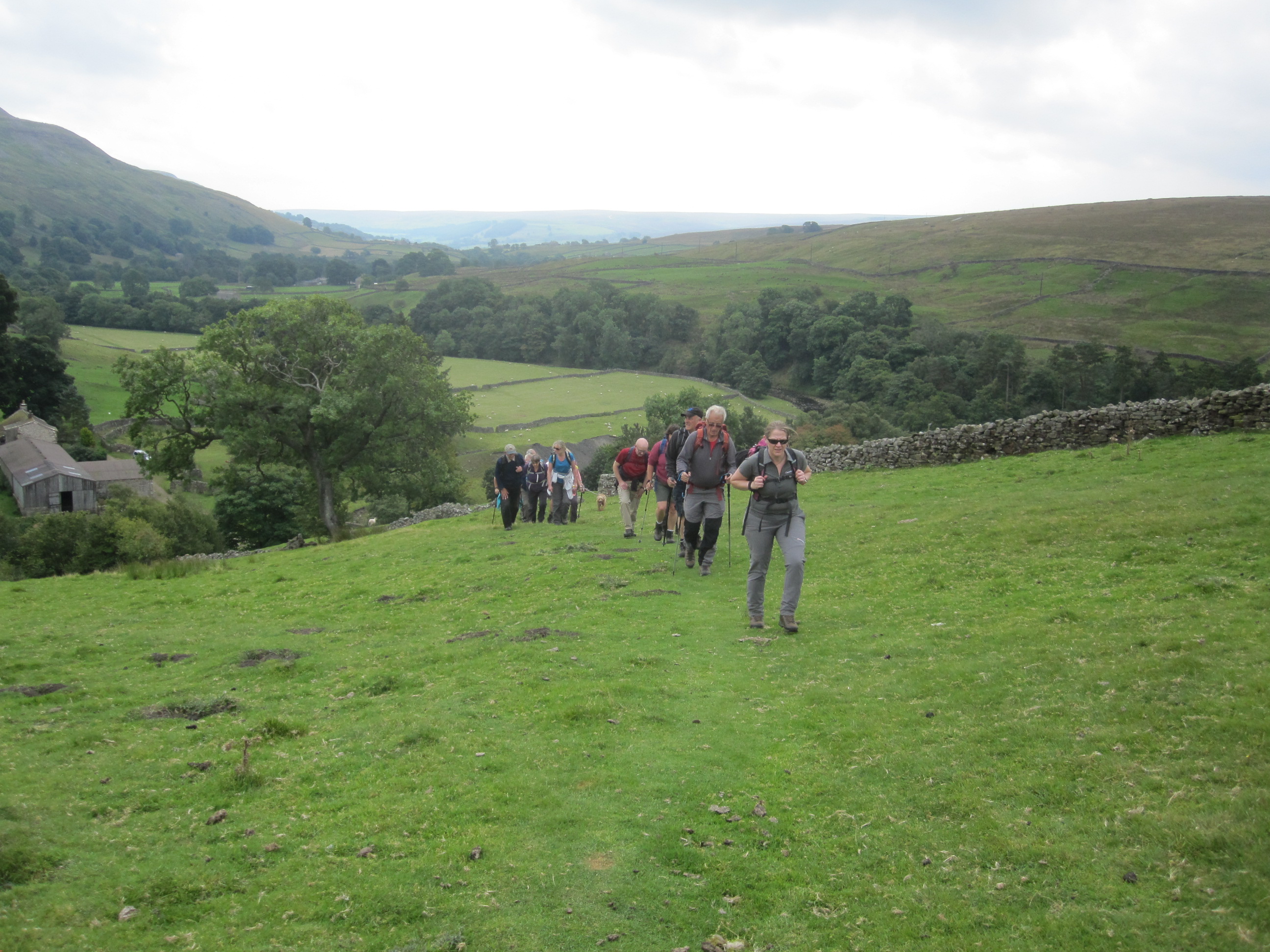 Given that a fair few members of the walking section had deserted Swaledale for the delights of Austria, Ron and I were surprised to have a good turnout of 16 plus Matty the (well behaved) dog for our walk up Arkengarthdale and down Swaledale.  We were pleased to welcome a new member, Finbar, and two potential members Lisa and Alenka.  The pleasant weather probably also contributed to the turnout – it was overcast with occasional sunshine and quite warm and the threatened rain held off the whole day.

The first part of the walk took us along Arkengarthdale on a lower path, partly alongside the beck where we saw intriguing “stone art” – stacks of finely balanced stones awaiting demolition with the next flood.  After reaching Storthwaite Hall we had a short climb across the fields to Booze before descending into the tiny village of Langthwaite where we had a short refreshment stop at the The Red Lion Inn.  This is a delightful and very traditional Dales pub.  The current landlady is Rowena Hutchinson and the previous landlord was her father, the pub having been in the same ownership for over 50 years.  A sign on the door requests that gentlemen remove their caps upon entering the bar and ladies requiring the bathroom are requested to remove their boots.

Suitably refreshed with beer/tea/coffee we walked a short distance along Arkle Beck and crossed over the footbridge to reach Arkle Town via the old graveyard.  After crossing the main Arkengarthdale road we had our picnic stop on a sheltered hillside before continuing up Fore Gill.  New member Finbar expressed an interest in the mining history of the region so we paused to show him the former mine entrance after climbing over the huge spoil heap.  From Fore Gill gate we continued along the side of Cringley Hill where the heather, which was in full bloom when we reccied this walk a couple of weeks’ previously was still flowering, although past its best.

We then took a steep track down into Healaugh and crossed the fields down to the River Swale to reach the stepping stones.  The river was low and the stones passable but we opted to stay on the north side of the river back to the swing bridge and up into Reeth.  We arrived back on the green to the delightful sound of Reeth brass band playing “The Swaledale Song” although I can’t take any credit for organising that!