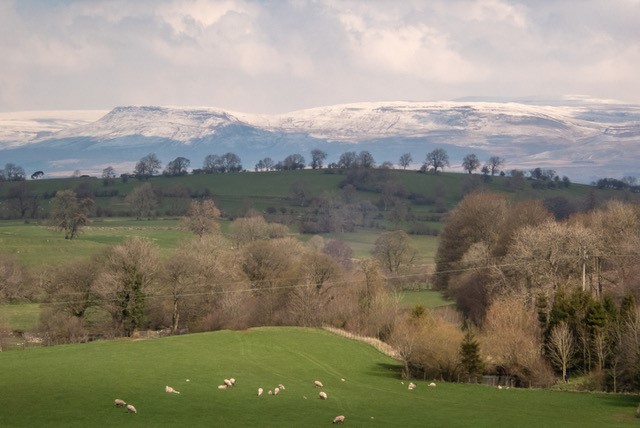 I don’t like the name “Smardale”; it seems to me to be too harsh in describing what is a beautiful dale. This walk of c.9.5 miles starts in Ravenstonedale, takes in the nature reserve that extends up the dale and then cuts back down Smardale Gill to return to the start point. (see map below).

Eight of us gathered on a day when winter was having its last fling. The fell tops were dressed in snow and the visibility was superb. The walk includes a variety of landscapes commencing with the footpath across the soft pastures that lead to the village of Newbiggin. Having crossed the Tebay to Kirby Stephen Road a track leads up to the disused railway track which formed part of the Stainmore Line, opened in 1861, and linking the Durham coal fields with the iron and steel industries of Furness. It is now a delightful three mile stroll through a dedicated nature reserve with its abundant flora and fauna and clearly well maintained by a volunteer group.

This section of the walk crosses Smardale viaduct and extends just beyond the impressive arches of the Settle-Carlisle railway viaduct which, on the day, was silhouetted against the majestic backcloth of snow-covered Wild Boar Fell. This is Victorian engineering at its best.

The walk then doubles back past Smardale Hall which I find is an ugly building designed to impress rather than edify. But it does include an adjoining barn that once served as a banqueting hall of an earlier medieval building that still retains its enormous hearth.

The walk continues to climbs to the top of Smardale Moor before descending down to the fine Smardale Bridge which once lay on an ancient route from the Lune Valley to the Eden and is described on the OS map as the old county road. In fact it once boasted a pub adjacent to the bridge. The passing of time can be a cruel thing. The last leg of the walk drops down through the former Ravenstonedale deer park in itself an impressive landscape feature dating back to the sixteenth century. This walk has everything you would want including, in my case, a lot of history which Yvonne will have been sorry to have missed.

The eight of us had a glorious day’s walking, reviewed in the cosy surroundings of the Kings Head. I had a pint or so of Moorhouses Bitter (Burnley); a fine Lancashire beer but not quite as good as I remember. Perhaps eleven years resident in Yorkshire has done something to my taste buds.