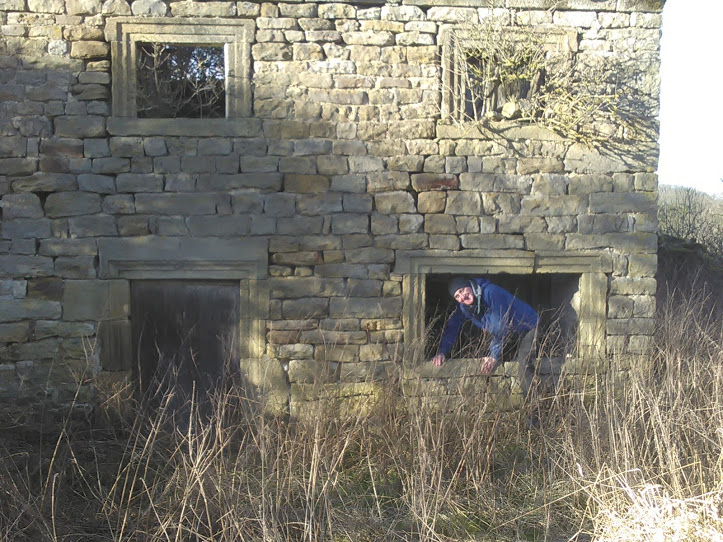 I enjoyed Bruce’s walk on Sunday 27th. January. So much so that I said I would write a little report about it. So here goes.

I’ve decided that I need to walk longer distances so I opted for Bruce’s 10-12 miles around Masham to start off with. I wasn’t going to be put off by 50 mph wind  ( perhaps I exaggerate slightly ) and joined Bruce, Peter and Brian in Masham market place on a very windy, yet bright Sunday morning.

We set off at a grand pace along the River Ure head down into the wind tracking north until we met a very fine fishing hut where the sun shone and proved excellent shelter. But we’d only come three quarters of a mile, if that, so Bruce wouldn’t let us stop for long. We admired the excellent building and headed off to reach Marfield Wetlands. What a  find! A lovely 3 lake wetland area with excellent hides and information boards all seemingly looked after by just one gentleman. Well, he’s doing a grand job. Do go if you have the time, as I certainly shall with my birding friends - from Surrey. Yes, the south.

We left Marfield behind, crossed the A6108, called a cheery good morning to the farmer who replied it was ok for some and walked along to an area around Spelder Banks. Fields led us to a very old green lane called Dawson’s Lane. It was deeply cut, trees either side and knee-deep in leaf litter. Utterly brilliant compost for one’s garden! Nestled into the beds of leaves was an old pheasant feeding drum where we were sure a hedgehog would have found the very best hibernating bed. Certainly a Premier Inn for hogs. The lane led us to the cross roads just before Fearby where we took a field footpath running parallel with the village, through an area of maize whose cobs were still on the stalks but not one had been harvested. Perhaps they were for cattle feed? These few fields were just like those in the film ‘Field of Dreams’ if you remember. Rather spooky.

Now along a lane and down to a fish hatchery and bridge over the little River Burn which runs into the Ure further to the east. This was our beautiful, sheltered, sunny lunch stop. Mallards on the water, ponies watching us, birds singing. One wouldn’t have known it was windy at all. Then, walking up’ards and south west we reached the woodland above Leighton Reservoir and the view towards Colsterdale. Here Bruce’s ancestry was laid out before us. In the shelter of the trees we heard about Grandma Bruce who lived in the farm opposite us and above Gollinglith and Agra; we heard about Great Grandma Bruce’s farm farther west towards Nidderdale and Aunty Bruce behind us now to the south east. Into everyone’s ancestry now, Peter with royal connections, Brian with Harkers all over the dales and mine, simple Welsh blacksmiths and shepherds. The way through the woods led us to the ‘Druid’s Temple’ and all its stone formations from not very long ago, to the café known as the Swinton Bivouac and then on down to an intriguing old ruin ‘Lobley Hall’. A farmhouse from the C17, sadly now without a roof but worthy of investigation and many photos. Bruce scrambled in and took rather a long time to scramble out again. Fortunately, the sun was shining.

On the return journey walking alongside the River Burn again, along the edge of the Swinton Estate, by Masham Golf Course and back into Masham market place. It was a simply super walk! I’m sorry Bruce if in writing this I have left out loads of stuff that you would have written but I found it a great day out, very good company, super views and much of it new to me. It was just lovely! Thank you.