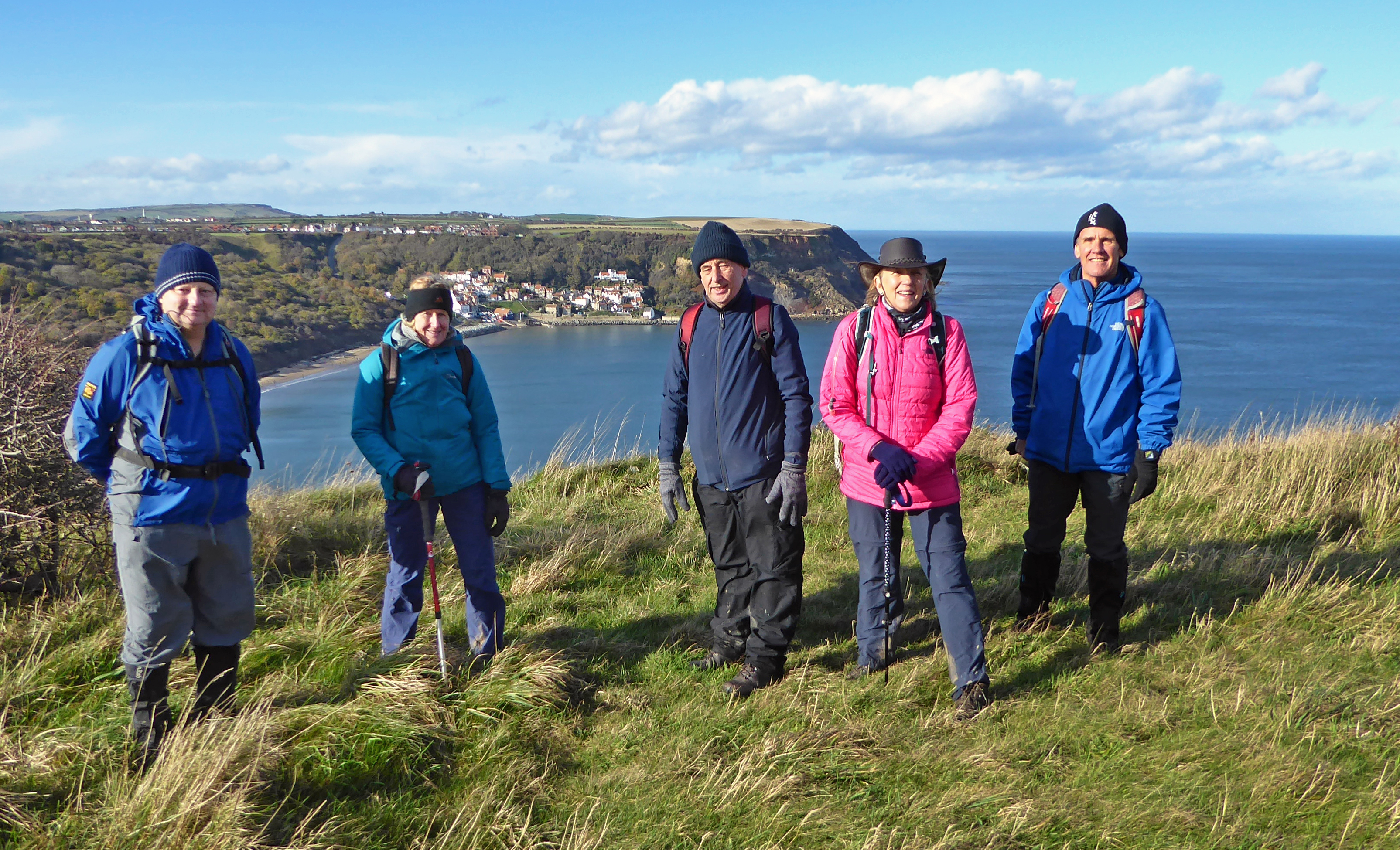 Kettil Ness – The cauldron at the headland was the Old Norse description of this part of our ‘Jurassic Coast’.  With boiling seas often shredding the cliff face it’s an apt description for much of the year but not today.  The sea was calm, the sun was out and good weather smiled on two groups of six walkers plus Demi the dog.

Our group started the walk at Sandsend and soon left the sea and picturesque village behind to follow the course of Sandsend Beck through the extensive Mulgrave Woods which were at their resplendent best with strong sunlight filtering through the autumn beech.  In warm sunshine and plenty of places to park ourselves the ruins of the 12th century Mulgrave Castle made an excellent coffee stop.  The castle went through several changes of ownership until its demise in 1647 when it was blown up and dismantled during the Civil War between Roundheads and Cavaliers.

At the western edge of the woods we had a route choice over how to cross Sandsend Beck.  After recent tree felling, the dry option involved a clarty and longer two forward one back slape up a muddy slope.  The wet option was shorter and more attractive but crossed a ford which was flowing quite strongly after yesterday’s rain.  In my group it was only the dog who voted against the stream crossing.  Bob Heywood’s group all fancied a bit of mud wrestling.

After the woods a farmland section took us back to the coast by way of East Barnby.  One landowner had decided to plough deep into the hedge bottoms before planting winter wheat which made the going here a bit heavy but otherwise the mainly pastoral landscape was pleasant enough.  We saved lunch until back in sight of the sea and made use of an old sunlit sandstone railway bridge for a bit of warmth and a backrest.

We joined the Cleveland Way coast path with excellent views back to Runswick Bay and Hummersea cliffs further north but turning south we headed for Kettleness.

The original and larger settlement of Kettleness was perched further out on its headland until 1829 when it slid into the sea as a result of a hundred years of alum quarrying.  What a different scene it must have been then with the noise of industry, the smoke from smouldering alum clamps and the busyness of shipping.  By contrast, today’s scene was the essence of tranquillity even though mining of the region’s resource rich sediments still goes on.  If we hadn’t known, we’d never have guessed that a mile beneath our feet, men and machines were busy at work extracting potash.

Further along the cliff top path we stopped to look at the entrance to the longest tunnel on a railway line which, until 1958, linked Middlesbrough to Whitby by way of a coastal route.  I can just about remember, as a young boy, having a special day out on this steam train, the views from the cliff top and the dark tunnels.  The tunnel that our group looked at was a mile long and a marvellous feat of engineering when constructed in the late 1800’s.

We made our way carefully down the steep steps and slippy cobbles into the valley of Deepdale before continuing along the course of the old railway and evidence of more alum quarrying at the Sandsend Mines.  Extensive views both out to sea and further down the coast towards Whitby were a great way to round off the day.

Many thanks to Bob Heywood for leading a second group and to all those who joined in.