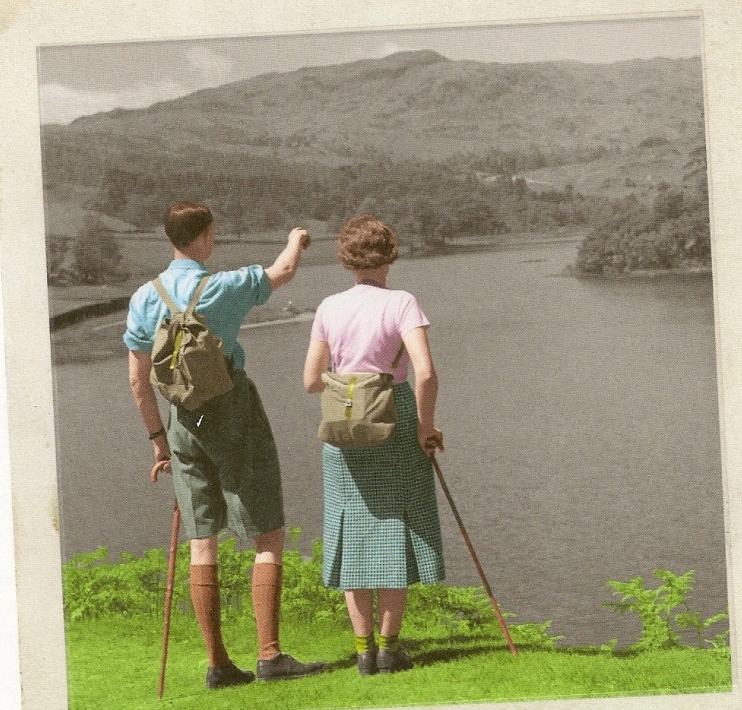 After two minutes of walking, Graham was relieved to see a pub in the distance.

Some walks are worth returning to and this is one of them. In fact I don’t think we visit Teesdale enough. It still has that tantalising, ‘get-away-from-it-all ‘ feel about it. About eight miles in length this ‘carpet-slipper’ stroll, as Trevor  (“It’s not worth getting out of bed for”) Thurlow  would describe it, starts from Bowlees Visitor Centre and involved the ‘dirty dozen’ including myself. Unfortunately, Glenys was unable to join us but the ‘Supreme Being’ had kindly made a large number of apple flapjacks which were well received and especially by Peter who had left his rucksack at home.

As a walk it has everything – the cold grey hue of the River Tees, the majesty of High Force, new born lambs, the surviving remnants of red grouse, panoramic vistas and a pilgrimage to one of my favourite hostelries – The Stathmore Arms at Holwick.

The route follows the river upstream from Wynch Bridge at Low Falls, climbing gradually through Moor House Nature Reserve and, having passed through an array of impressive juniper bushes, leads to a coffee stop at High Force. It is always an awesome sight and I still have fond memories of the falls dressed in a curtain of ice one winter’s morning some years ago. If only winter would bring in more of those days!

Onwards the track passes over a couple of footbridges with the vast quarry to the right and up to Bracken Rigg where the route diverts left for a short distance to engage with the return leg following an easily discernible green trod. This is the tricky part of the walk because it is fairly boggy underfoot and involved negotiating a number of fast flowing streams including Bleabeck. Surprisingly everybody survived the crossing without taking a winter’s dip. There then follows a short ascent onto the plateau of Holwick Moor. From there a long track leads downwards past Holwick Scars into the village and to The Strathmore Arms where Brexiteer members of the group made a rush for the bar in true ‘Farage’ fashion; “no French wine, merci, just good English ale, please”. An utterly delightful, inviting inn, why are there so few of them in our part of the world? Having emerged from the pub we sauntered and hiccupped our way down to the river (or at least I did) and followed the riverside path back to Wynch Bridge and Bowlees.

But a good walk has many attributes apart from imbibing the beauty of the English countryside and the subtle tastes of English ale; moments of quiet reflection and introspection of a 68 year old leader (who am I? where are we? why I am here?); conviviality and conversation across the full spectrum of current issues and concerns – Brexit and ‘Dark Matter’ (aka Donald Trump); or just getting to the ‘bottom of things’ which Yvonne may be expecting when her ex-boyfriend comes to stay in a few days time. Is there a song called "steamy windows"?

Thanks for everyone’s company.