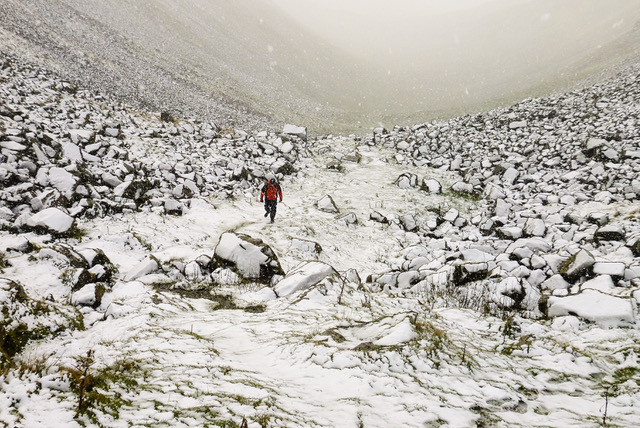 The weather was something of a shock for us as we drew back the curtains on the third day of the Club’s Dufton Youth Hostel Event – it was snowing steadily.

Following an over-breakfast debate the cyclists decided to withdraw back to Richmond and their warm firesides and roast dinners, while a few hardy walkers mapped out a plan for the day. Ian and Peter Knowles bravely deciding to drive across to the Lake District to reconnoitre a walk for the end of January 2017. While Yvonne, Patrick and Peter Clarkson joined my programmed walk to High Cup Nick.

The weather appeared to be brightening up as we set off but the snow was replaced by steady rain enforcing the donning of waterproofs after less than a quarter of a mile. They were not to come off for the whole day.

Having decided to reverse the planned route and climb up to the top of High Cup Scar, rather than climb down from it given the weather conditions, we followed the lane to the Farm at Harbour Flatts. We then took the path straight up the narrowing valley, ascending steadily to our very white objective. The rain relented as we climbed, only to be replaced by steady snowfall and a freshening breeze as we progressed first over the awkward boulder field and then steeply up the final couple of hundred feet to High Cup Nick itself. A roaring and freezing wind greeting us as we climbed out at the top.

Simple walk now down through a winter wonderland of powder snow as we followed the Pennine Way back to Dufton. It had been an at times challenging day but we all agreed that it had been infinitely better than toasting our toes in front of the fire.

Moral of the story: cyclists bring walking boots with you next time just in case.