Helvellyn by the ridges

Sunday 20th May – Helvellyn by the ridges.

When Alan Scott says ‘strenuous scramble’, he can be relied on as being true to his word.

Alan, Graham Moss, Trevor Thurlow, Archie and I left the cars at the George Starky Hut front car park, thereby avoiding the £4.50 parking charge at Patterdale, and set off up Grisedale on a sunny, calm morning.

Crossing Grisedale Beck via the foot bridge near the sheepfold and the regular path up to Grisedale Tarn, we were soon climbing steeply, skirting Eagle Crag on it’s left, to gain the less steep grassy rise leading to the base of the final rocky eastern ridge of Nethermost Pike. 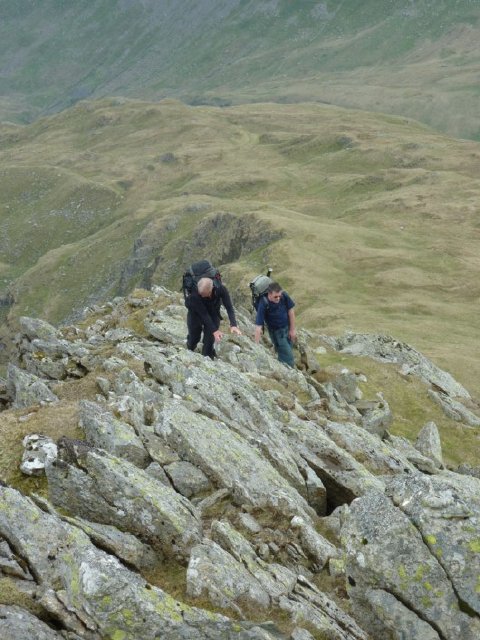 Here the angle of climb increased markedly, but we were soon on the relatively flat top of Nethermost Pike, andwalking

along the rising ridge by Swallow Scarth before starting our descent onto Striding Edge. 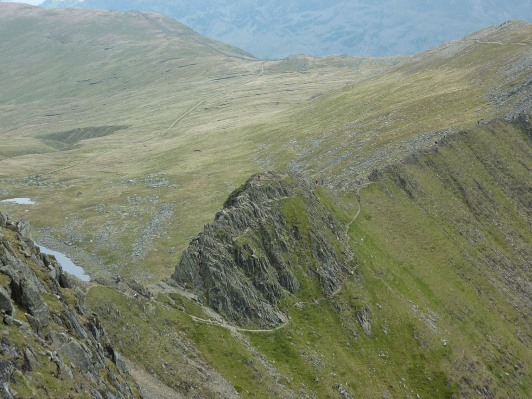 It was rather unfortunate that we met the masses climbing Helvellyn via this popular route on this fine day but, with good manners displayed by all, we had soon scrambled along the ‘Edge’ before cutting down to Red Tarn, where lunch was taken. Alan divulged his knowledge about the Herdwick sheep grazing around the edge of the tarn, and how this once a rare breed may have disappeared, had it not been for the good works of Beatrix Potter. While having a coarse fleece, this breed is highly valued for the quality of its meat.

We were soon off once more, our route taking us a second time onto Helvellyn’s rounded back via the scramble up Swirral Edge and top of Water Crag.

Having sought the route preferences of the group for our return, the decision was made to proceed via Lower Man over Whiteside Bank, Raise, down to Sticks Pass and on down Glenridding valley, through the village and back along the road to the cars.

A really good taxing walk, ideal training for the three booked up for the Corsica GR20 in June. The majesty of the Lakeland’s mountains and lakes takes some beating.

Many thanks to Alan, and everyone who turned out.