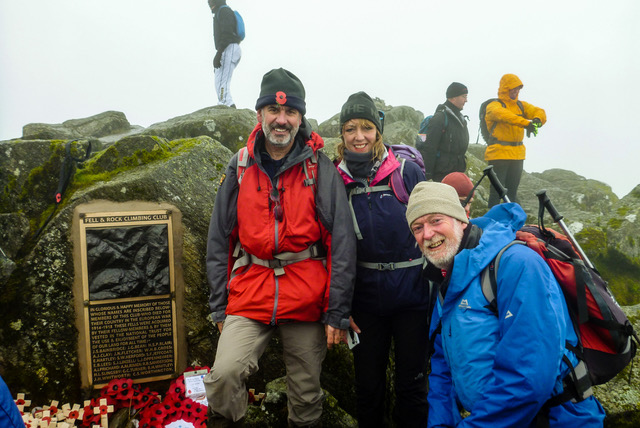 It is 100 years since the Battle of the Somme and so this year’s Remembrance Service is a particularly poignant one. The summit of Great Gable is a war memorial dedicated to the members of the Fell and Rock Club killed in the First World War and subsequent conflicts and every year a memorial service takes place at 11.00am on Remembrance Day.

Great Gable is a particular favourite summit of mine, so to combine it with an act of remembrance seemed a good idea. Leaving Richmond at 6.30am didn`t seem such a good idea on the day, but Jill, Trevor and myself set off for the drive to Seathwaite in Borrowdale to be in plenty of time for the 11.00am service.

As we approached Seathwaite it became obvious that we would not be alone as car parking was at a premium, but we eventually found a space and kitted up for a day which was forecast as cold and dry to start, but with rain spreading in after lunch. We set off up Sour Milk Gill with a steep initial ascent leading into Gillercomb with good views of the Buttress and crags. The path joins the route from Honister Pass near Green Gable and at this point we saw a mass of walkers all heading for the summit of Gable.

On the summit of Green Gable we looked across to Gable Crag on the north face of Great Gable. This was the scene of an accident several years ago when Alan Turner a respected member of Swaledale Outdoor Club died. Trevor and myself had been on an S.O.C. walk on Red Screes that day and we had seen helicopters flying to the crag, not thinking that it was for our friend. It marked our first act of remembrance of the day as we thought of the beautiful cold winter day on which he died.

From Windy Gap there was a line of walkers all heading to the summit. We arrived at 10.45am and we estimated that there must have been 1000 people on the summit and about 100 dogs! The service commenced and the mass of people was absolutely quiet for the two minutes silence, which was followed by the Last Post, played on a bugle, a very touching moment.

After an early lunch and photographs at the memorial plaque we headed down the greasy path to Sty Head and eventually to the valley bottom at Stockly Bridge were we stopped for coffee.  We started chatting to a group of women from Liverpool, my home city, and asked them to take a photo of Jill, Trevor and myself together to remember the day. I asked the lady taking the photo to “make me look rugged and distinguished” to which she replied like a shot “it`s only a camera you know”. I remembered the quick fire humour that Scousers are renowned for.

A pint followed in the Scafell Inn and we drove home listening to Bruce Springsteen a favourite of us all and we recounted the times we had seen him play. On approaching Richmond the Bruce track of him talking about his relationship with his father came on the stereo and I started talking about my Dad, who died three weeks before my wedding. Trevor and Jill then talked about people close to them who had died and what they meant to them. We entered Richmond nearly in tears after a day of remembering people, not only those killed in battle, but S.O.C. friends and family dear to us all.

It had been a great day on Great Gable, but also a great day for remembering people. Alan Scott