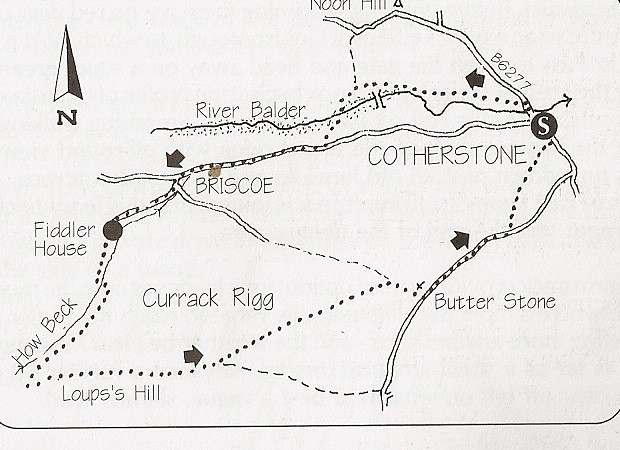 The weather in late autumn can be seasonally capricious; late summer warmth; a low sun that plays clear light on the features of the landscape; majestic, scampering clouds; cold north-westerlies and heavy blusters that hint at the arrival of winter; the colourful residues of leaves that cling to the increasingly skeletal fingers of beech, oak and sycamore; the burgeoning harvest of blackthorn sloes juxtaposed with the inviting crimson of hawthorn red.

Such was the landscape surrounding Cotherstone which greeted fourteen of us on 1 November to enjoy an eight mile circular walk that takes in Currack Rigg. I have grown increasingly fond of Teesdale. It has an enticing sense of remoteness and tangible associations with past. The walk itself is described by the map. It encompasses a range of landscapes; firstly, a path out of the village that winds its way through pasture and meadow and leading upwards across the old railway line before descending and crossing the River Balder set within a deep wooded gorge (presumably the Balder in full spate is known as “Balderdash”?!).

At Briscoe the route leaves the lane giving on to a track alongside which stands the partially restored Methodist Mission Church and a fascinating information board which describes the centrality of this place to the social fabric of scattered communities in the past (Yvonne made a quick mental note of this phrase for the purposes of her history homework essay which I still await).

At Fiddlers House the route gives access to the open moor and follows How Beck until deviating upwards to Loups Hill. This location offers panoramic views in every direction. It is also marked by a small circular enclosure which strongly suggests that this spot may have had cultural and religious significance to pre-historic communities who peopled the surrounding area. A little further along the green trod can be found the still visible outlines of pre-historic “cup and rings” etched into a flat rock which is on the same alignment as the circular enclosure.

Our route led us on to the ruined farmhouse of East Loups. It has an atmospheric feel to the site. It would have been a very substantial sheep farm at one time. It also tells a moving story. Joe Ridley took on the lease of the farm from Lord Strathmore in 1913. He borrowed heavily to invest in stocking the farm spending about £230 on ewes, hogs and a tup. He had a wife and six children. In 1918 his family was afflicted by the flu pandemic which killed more people across Europe than the Great War. That really is true pathos. Joe lost his wife and his seven month old son. He was therefore left with five children to bring up and a farm to manage. “We are all very sorry to hear of your dear wife and child”, a friend wrote, “and express our deep sympathy….. It will be a great loss to you and your children. There is no loss to compare to that of losing a wife and especially when there are little children left without a mother and the circumstances of you left with a farm and stock to look after”. Joe soldiered on. You can gaze down the long winding track leading to the farm and imagine Joe’s children making their journey by horse or by horse and trap down to the school in Cotherstone through weather much less clement than we experienced. It is not surprising that Joe and his family abandoned the farm in the 1920s and moved to Egglestone. Subsequently, the farm became part of the military training area and suffered the consequences.

We crossed the same moor which Joe’s children would have had to tackle on a daily basis in order to secure a basic education. Our journey back into Cotherstone was one of leisure. Theirs was one of endurance. History is indeed written into our landscape.

Time to reflect. Our journey’s end finished in the warm and elegant comfort of the Rose and Crown in Romaldkirk – a haven of bibulous conviviality and a far cry from the life of Joe Ridley.