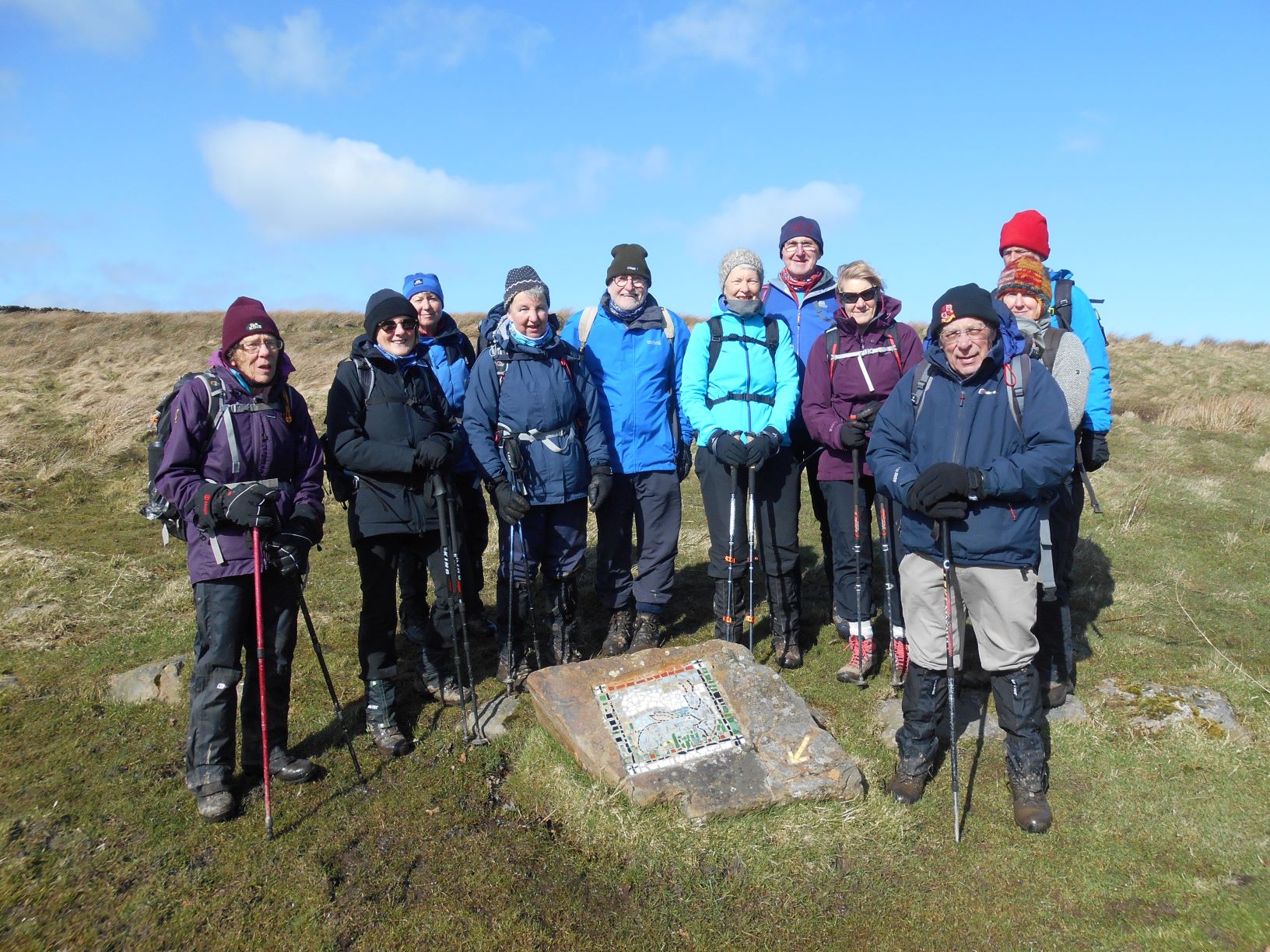 We were a party of 12 on this walk in and around Dallowgill – just to the west of Kirkby Malzeard.

I discovered the existence of this trail quite by chance when thinking about my winter walk for 2020. There was a bit of a catch to this, however, as when I went to recce it a few weeks before the date of the walk I found that the approach road to our parking place was narrow and had a very steep sided valley half way along the route.  There were some ominously close and well stocked piles of road salt on both inclines!  Was this a wise walk for a winters day I thought? Perhaps inevitably the forecast for “one day only” on 12th March was for snow and ice at a low level overnight, so it was with some trepidation, and a round robin setting out a “Plan B” to the walking section, that we drove over to Dallowgill on the morning.  Fortunately, although there was a light dusting of snow which was quickly disappearing, there was nothing to worry about and we all gathered safely for the start of our walk.

This enjoyable trail around part of Dallowgill has a series of 22 mosaics spread out along the way which depict local scenes and flora and fauna which might be encountered along the route.  The trail was created as part of a community project back in 1997 to celebrate the designation of Nidderdale as an Area of Outstanding Natural Beauty. The mosaics were made by a local group “The Crackpots” from Kirkby Malzeard who met regularly under the guidance of an experienced tutor from Rural Arts North Yorkshire, based in Thirsk and still going strong of course. All the mosaics were colourful and whilst some were more expertly made than others, all were of great interest.  They are placed in the context of the piece – and for the flora and fauna at least would be even more apt later in the year when flowers, trees and animals are more likely to be around. When I was on my recce I met a local dog walker and we were discussing the trail.  He said that some of the original team still go round from time to time to make sure the mosaics are clean and in good condition. Not bad after 20 odd years!

So the mosaics were a great feature of the day – but the route itself is varied and interesting.  Starting across moorland we quickly moved onto one of the many old tracks and green lanes used during the day.  Our first settlement on the route was the hamlet of Carlesmoor. The “road” through most of this was still the earth track of yore, and it was like going back to earlier times. In the hamlet is the remains of a “Potato House”. As the name suggests a store for the crop to extend the season of use.  A first for all – and the subject of one of the mosaics.  Further along is another of a “Sighting Tower”. Until I had researched this I had little knowledge of the works that had taken place in the first part of the 20th Century to move the water from Leighton and Roundhill Reservoirs to the ultimate destination of Harrogate. It transpires that a tunnel with some aqueducts across valleys were built to transfer the water over 3 miles on its way to the River Laver. A series of 4 sighting towers were built to survey the route of this and the reservoir works and the 3 of these that are stone built still stand today.  One can also be seen above Leighton. So now at least 12 Club members know these are not  “monuments” but something rather more utilitarian if still impressive in their design.

As we ticked off the mosaics we made our way across rather muddy or waterlogged tracks into the valley passing through varied scenery. As we moved back onto higher ground we realized just how windy the day had become, but fortunately large parts of our route were reasonably protected from the worst of this gusty weather.

Our group shot is of the party around Mosaic 18: Rabbits, as we started on the last stretch of the route.

Overall a great day out and one to be recommended if you are walking in the area.  I could be an ideal walk to go on with older children as it is full of interest and a bit of a challenge to see who spots the next mosaic first.