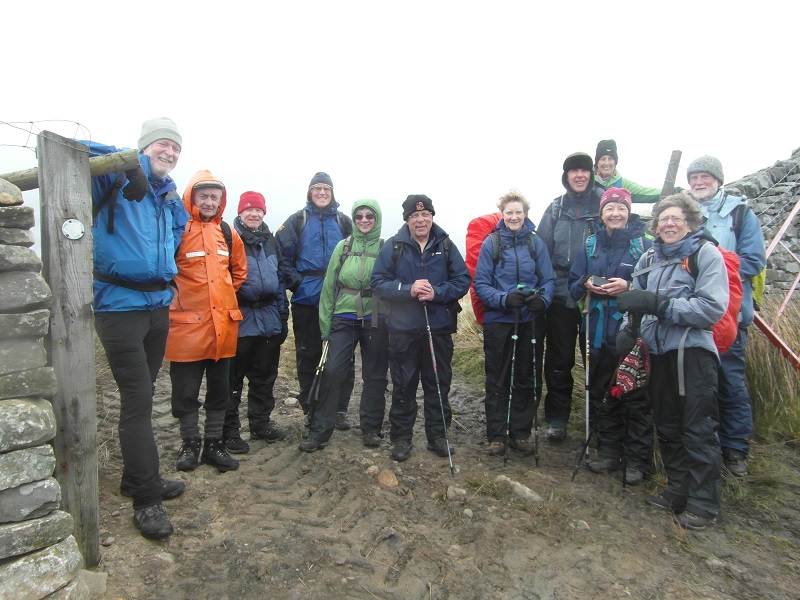 Easter Sunday and thirteen “good eggs” assembled in Carlton for an eleven mile circular ramble. The weather forecast was not good. In fact I anticipated a “Richard Wright” event – teaming rain and a quick dash to the pub. But, as events turned out, it wasn’t too bad though nothing like as good as the weather that blessed our recce just ten days ago. Conditions underfoot were firm for the most part apart from short messy bits (“A bit like you, Graham”, someone said).

The walk itself starts with a steady climb up a track south of the village which eventually leads to Howden Shooting Lodge and then swings right to reach the summit of Harland Hill. This also gives rise to stunning views across to Wensleydale even in these rather bleak conditions and the magnificent panorama of ancient and modern field patterns if landscape history takes your fancy. There then follows a sharp descent down to the remains of a former lead smelt mill where a coffee break was taken.

The second stage of the walk involves turning left and following a lane called Whitelow Road for a distance of a mile or so. In fact it is a delightful lane which at this time of year is lined with primroses. After a steady upwards plod our path turned left signposted Horsehouse and Kettlewell and climbed up towards Dove Scar before branching left across the open moorland of Fleensop Moor. There we had lunch with its usual light conversations. “I gave up cycling between the age of sixteen and twenty-one”, Barbara Gravenor remarked much to my astonishment, “it didn’t have any street cred”. She’s made up for it since!

But the countryside calls. The track then winds its way past a series of shooting buts, disused mine shafts and, having crossed the ford, swings left through a gateway on to further open moor where the path is less distinct. Following the line of a moorland wall we descended down to Fleensop Farm and on the way Glenys, Barbara, Peter and Ann enjoyed the delights of Easter egg rolling (the hardboiled type!).

That put us on the return leg through a series of softer field systems peppered with young, energetic lambs who scatter in pursuit of largely disinterested mothers. A further three mile saunter took us back into the Carlton and the refreshing arms of the Forresters (what a fine establishment which happened to be closed after our recce walk). This is a stunning walk with varied scenery and points of interest and especially on a clear, sunny day. It is a decent length and involves about 1900 feet of climbing according to Steve Rogers. Not to be missed.