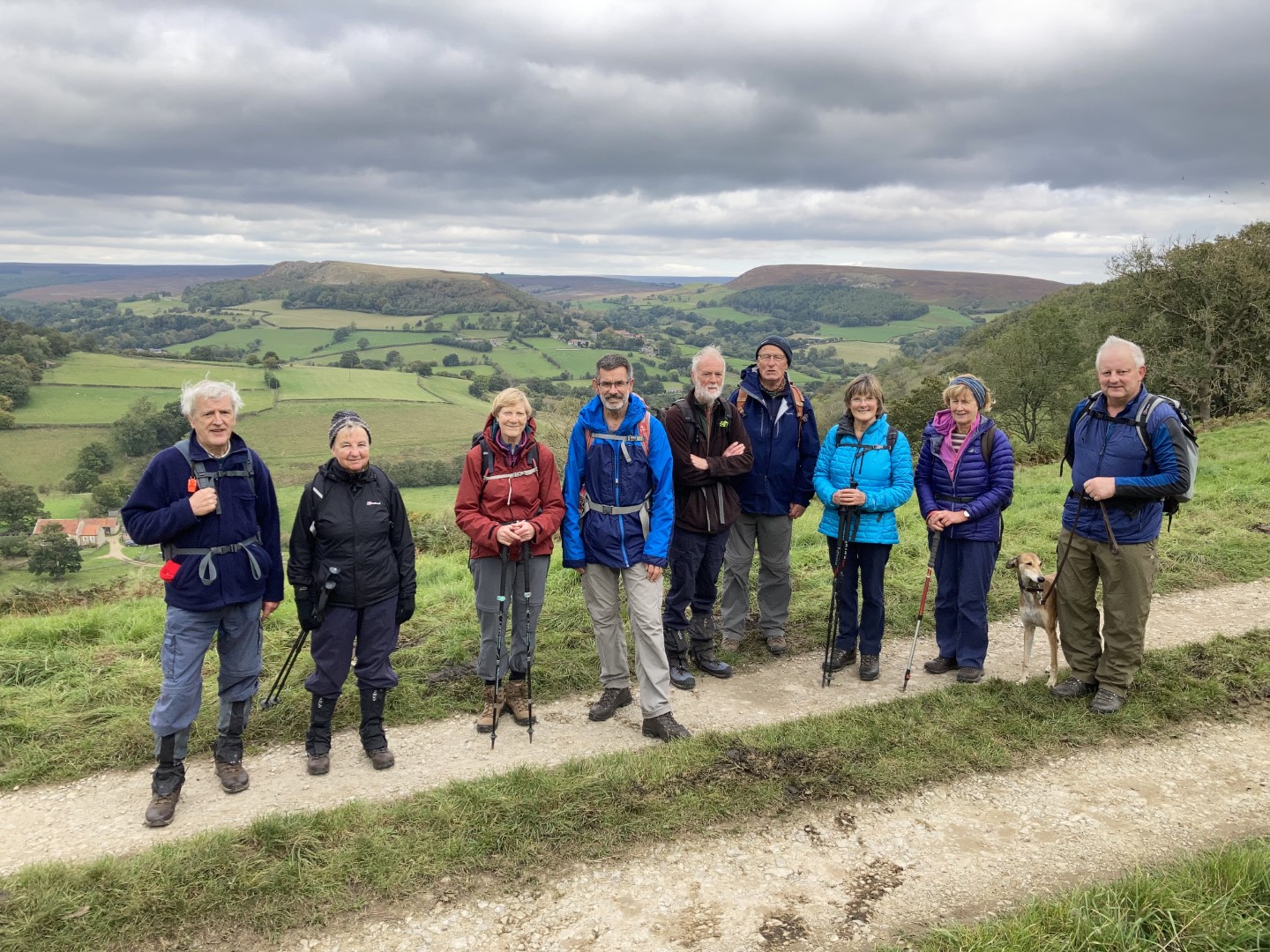 A good turnout for a walk on the Moors saw 10 of us and John’s dog Demi meeting for a walk of just over 12 miles.  Our walk took in good stretches of the Cleveland Way, and completed the circuit on paths that were unknown to many in the group – so it proved to be a good mix of the familiar and unfamiliar on what proved to be an overcast and somewhat “blustery day” that still gave some good long distance views.

We started our walk from Sutton Bank by following the Cleveland Way to Cold Kirby before heading north on a bridleway across the fields.  We dropped into and out of the valley containing Yowlass Wood and past the farm at Murton Grange.  The farmer here seems to be spending huge sums on redeveloping the farm site and buildings as well as investing in some very high quality new walling and fencing.  Times must be good in Ryedale!

We then dropped down into Gowerdale starting with great views up to Hawnby, and the obligatory group shot was taken at this point.  Graham was able to share his knowledge of the geology of the area and the way that melting ice sheets had helped to create the interesting series of valleys that cut into the moor at many places in this area, forming many west-east valleys draining into the River Rye.

We walked out of Gowerdale heading east through pleasant woodland until it emerged onto the moor, before heading for the scarp edge and joining the Cleveland Way again at High Paradise Farm.   We were given lots of good views of course as we made our way back to the start.  The consensus was that the vista here was indeed one of the widest uninterrupted views around, and may well deserve the status given to it by James Herriot and the National Park , or at least be on many people's shortlist as “ the best view in England”. Having said that the specific place marked as the viewpoint seems to have more to do with its proximity to the carpark at Sutton Bank than offering the best place to look to the west.

As we had walked along the scarp edge a number of us had noted that the road leading up to Sutton Bank seemed unnaturally quiet.  As we partook of our coffee and cake at the visitor centre the reason became clear.  Apparently earlier in the day a lorry containing large quantities of pork joints had shed it’s load and the road had been closed.  The current status of the closure was unclear.  Some of the party decided to chance it and go back down Sutton Bank – I hope they got home easily!  Anne and I chickened out and went home overland via Boltby.