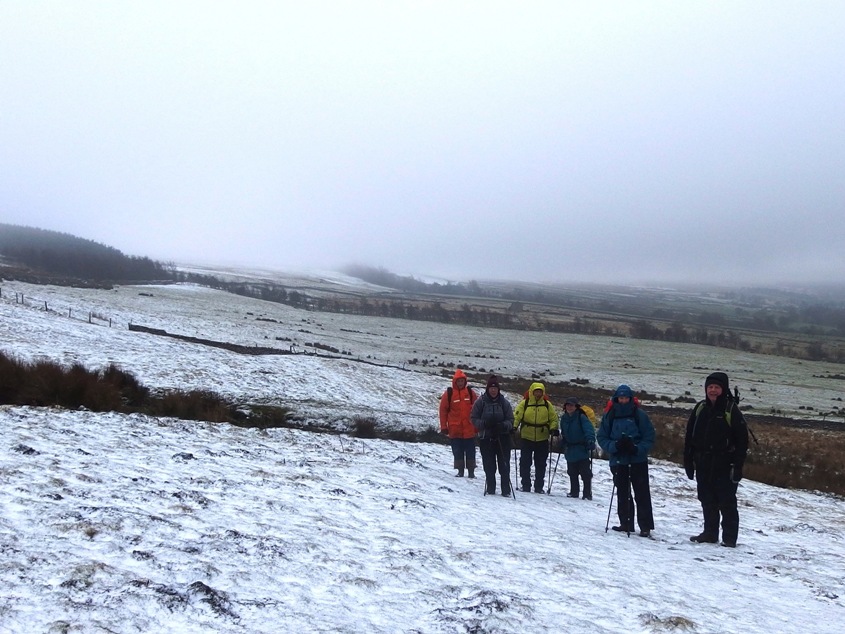 You may remember the cold and dreary few days we had around the time of this walk.

The previous 2 days had given us persistent rain and sleet, so it was almost a relief to wake up to just murk, drizzle and the threat of snow on Sunday morning.  Indeed snow on higher ground and even the road surface was evident on the “tank” road over to Leyburn and beyond.

Barbara C and Mark were on board, having taken up my offer of a lift, leaving Gwyneth in bed with a cup of tea, and a well-timed cold.  Four more hardy souls – Jeff E, Ann L, Yvonne and Brian H joined us at Carlton-in-Coverdale on what was now looking a distinctly cool and dreary day.  We didn’t hang around too long waiting for other walkers, and were soon all layered-up and striding out of the village, pausing briefly to check what time the Forresters Arms would be open until in the afternoon.

We headed South West along the metalled lane then footpath towards Fleensop, accompanied by a light snow flurries bourn on a following breeze.  After a mile or so Brian was finding that his rubber work gloves were proving inadequate to keep out the cold, but Yvonne came to the rescue with a spare pair of warm mitts.  We soon dropped down towards Gammersgill.  I made a point of stopping and pointing out a section of dry-stone wall and stile I had helped re-build on a course back in 2008 (see photo).  In the village itself, we found a nice sheltered, grassy spot amidst a host of emerging snowdrops for a coffee break.

This was where the first of two possible escape routes – across the river via un-tried stepping stones and back along Turnbeck Lane on the other side – was rejected as the snow had stopped, and it was relatively sheltered and less cool in our little flowery dell.  So we pressed on through fields along the bank of the Cover.  A heron, then a buzzard, flew up ahead of us, a lovely stretch of the walk on the sunny day I had done my reccie on a few weeks before.

However, further on, rather than turn right to Horsehouse and on to Arkleside, I made the executive decision to take escape route 2 – over the footbridge to Hindlethwaite Hall then a steady climb up the valley side to Swineside.  I didn’t like the look of the low cloud up on Hindlethwaite Moor, and didn’t relish the prospect of the planned 2+ mile trudge at high level, without shelter into mist and light but driving snow.  The new path ascended across fields, trying to spot the gate or stile in the next field boundary through the mirk.  Approaching one fence, a frightened roe deer, trapped in a corner by the high fences of the next field and the one above became increasingly frantic, so we held back until it realised that, if it just kept going downhill, it could make its escape.

Eventually the buildings of the little hamlet of Swineside emerged through the mirk and we were able to have a relatively comfortable lunch break behind a barn out of the increasing wind and heavier snow.  Then on into the driving sleety snow, but just for a mile along the easy, though frozen slush-covered, metalled lane down to West Scrafton.  From there down Caygill and up the steep sting-in-the-tail path alongside Goodman Gill on the other side of the valley, and so back to Carlton.

Probably only about 6.5 miles in the end, but quite long enough in view of the weather, despite which everyone said they enjoyed the walk.  We finished off in the dry, warm Forresters Arms with a variety of beverages including, for Jeff, a carafe of coffee big enough for four people.

Pity I had to shorten a nice walk as I had found some snippets of interesting local history to relate along the way.  I therefore plan to repeat the full walk in the Summer, so if you want to hear, for instance, the gruesome story how Dead Man’s Hill got its name, you’ll have to join me then.