Boltby to the White Horse

This was my walk, which was attended by Graham M, Mike I. and Sharman W.

Mark T was unfortunately involved in an accident on his way to Boltby, thankfully no one was hurt, but Mark’s car was a write-off. We waited until 10:25 in case there were any other delays due to roadwork diversions in the area.

From Boltby, we crossed fields to Tang Hall, with it’s moated enclosure, then past Southwoods Hall on to Goremire Lake, where we paused for refreshment. At Goremire Farm, the kind owner directed us through his premises to a path which meant a much shorter road walk to reach Hood Farm, and then by Hood Hill to the White Horse. Lunch stop was taken at the N. York Moors Visitor’s Centre, before continuing along Sutton Brow and Whitestone Cliff to visit the excavations at Hill Fort Windypit and on to the derelict farm buildings at High Barn. Here, we descended the ‘zig-zag’ path to cross the fields back to Boltby. I believe that everyone enjoyed the day. 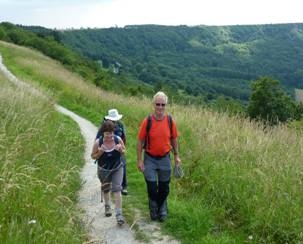