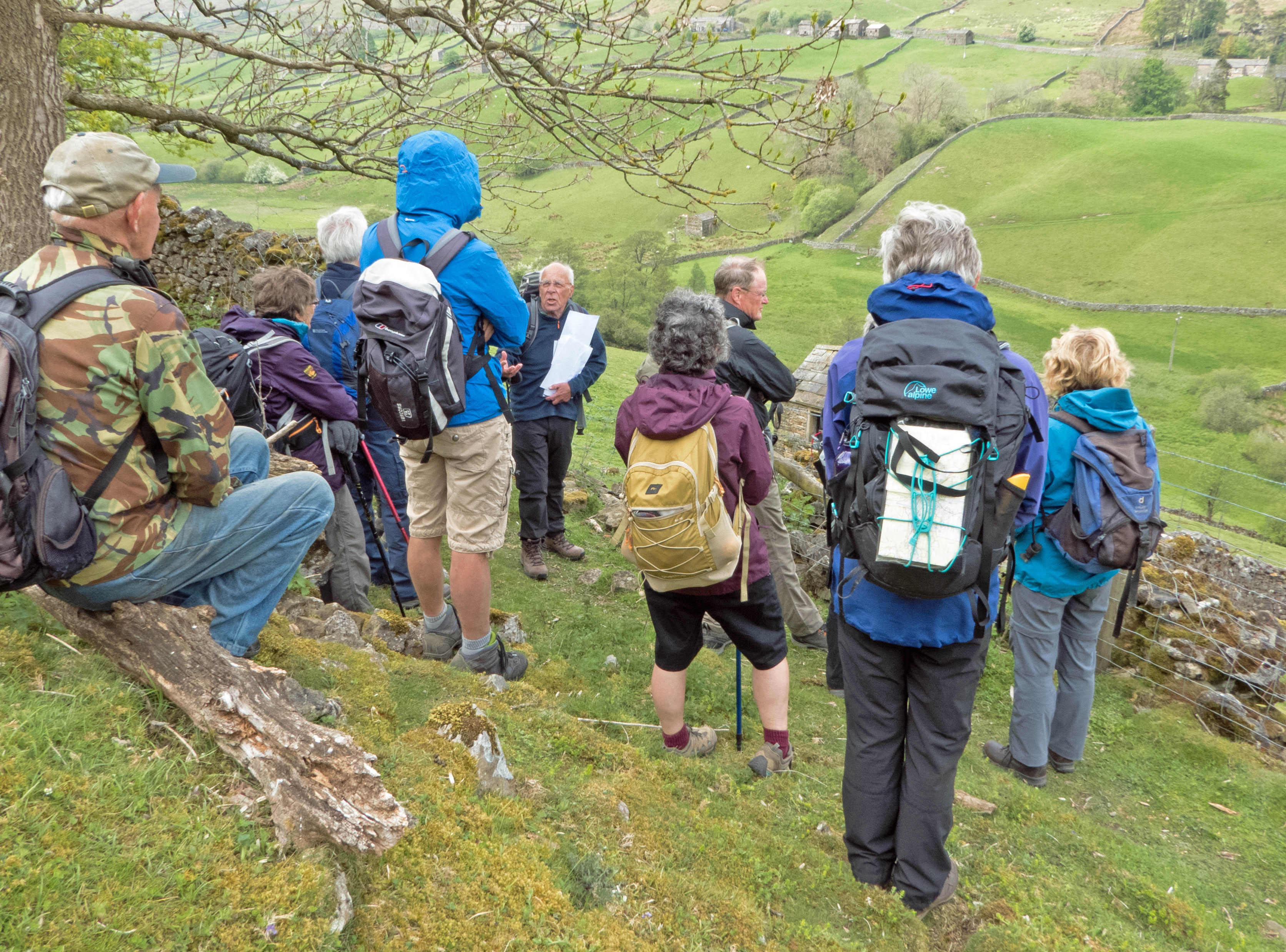 The magnificent landscape of Swaledale is a composite picture comprising many features; but there are two which make it what it is – the walled field enclosures and the iconic field barn.

This walk originates from Bruce Stainby’s involvement with the National Park’s Project “Every Barn Tells a Story”. It figured in last year’s Richmond Festival programme and seemed worth a return visit as a SOC walk.

A dozen walkers took advantage of this opportunity though it was not for the faint-hearted. Brian Harker did a runner within five minutes of the walk leader getting into his stride talking about the historical landscape we were looking at.

Starting in Keld the route is about six miles in length. It drops back down the lane out of the village, takes the track on the left, across the ford and follows the footpath immediately to the right. This traverses the daleside downwards and then climbs upwards to Crag Hall in Angram. From Angram we took a moorland path across to Hoggarths with the return leg via Low Bridge, Cotterby Scar, Cartrake Force and back up to Keld.

It is a pleasant enough walk but it is studded with physical reminders of how the dale developed over time. In particular, the field barn tells the story. As a conspicuous feature in the landscape it raises a number of obvious questions; for instance, why are there so many of them? (Swaledale has the highest concentration of field barns in the Dales at 14 per square kilometre). Why are they located where they are and for what purpose? Who built and managed them? And why are so many redundant and now stand like ghosts from the past?

Answers to these questions can be extrapolated from what you immediately see in the landscape, from maps (OS maps, Tithe Maps, Enclosure Maps and Awards), from documentary sources such as manorial, estate and farm records and from the rich oral histories provided by families who managed the local landscape over many generations.

To some extent barns have a long history to them. Principally, they are associated with the shift towards a pastoral economy and the enclosing of land for that purpose. Some of the field enclosures, bounded by stone walls, date back to at least the sixteenth century. These old fields are usually connected with the “taking-in” and improvement of land from the rough, open pasture on the daleside. They can also be identified by their irregular shape.

The enclosing of land into fields accelerated in the later eighteenth and first half of the nineteenth centuries. This process is known as the period of “Parliamentary Enclosure” when landowners applied for private acts of parliament to extend and rationalise the enclosing of land across a parish as a whole. Typically, these fields reached up the dale side and across the dale floor and can be identified by their more rectangular, symmetrical shape.

The fields also incorporated modest size barns many of which were inserted into the wall length or straddled a wall such as to serve two adjoining fields. Hence, we know that a high proportion of barns must date from the later eighteenth century into the early nineteenth. They are simple two-storey structures, compact and modest in scale (usually 4-5 by 8-10 metres). They are constructed of rough, coursed sandstone bonded with lime mortar and usually consisting of two skins with a rubble infill and bound together by large through stones. The typical barn had a simple ground plan. It was served by two entries – one into the “mew” where loose hay was stored for winter fodder and the other into the byre which housed four or five cows in stalls or “boskins” in local dialect.

These barns and their fields served the local population in several ways. A growing population until about 1850 generated demand for land and produce. Swaledale contained highly populated villages. For instance, it is astonishing to think that Muker had a parish population of c.1200 in 1800 (the parish included not only Muker but Thwaite, Keld and outlying settlements). It was also a population that reflected large families who combined diverse occupations – working the lead mines, craft trades and managing a small croft. The croft was vital. It enabled families to manage a few cattle (largely women's and children’s work) for both subsistence purposes and to generate a supplementary cash income from any surplus. Butter and cheese found a ready market in Hawes. The barns themselves housed no more than four or five cows; in effect the number that could be sustained over winter from the hay produced by a small croft as well as by summer pasturage on the once open dale tops.

A few families owned a barn and croft.  Most, however, leased their small holding very often from absentee landowners and it was the form of their leases which made it possible for families of very modest means to acquire and manage a small holding. Typically, land was held on a “customary” lease granted for three “lives” on the payment of a capital sum when the lease was transferred but subject to a much smaller and manageable annual rent (that is the basis of the 99 year lease). However, all that would change during the course of the nineteenth century when landlords pursued a policy of switching customary leases to annual leases which carried a much higher "rack" rent.

A third factor which would explain the profusion of small barns set within modest sized fields was the practice and tradition of “partible” inheritance whereby property was left to be divided among surviving children rather than settled on an eldest son. This may explain the location of more than one barn within the same field so that pasturage could be shared.

In summary, most of the barns you see today have a comparatively short history certainly in terms of serving a key economic and social function i.e. cow-keeping. As we move towards the mid-nineteenth century this function became increasingly less relevant to families who remained in the dale. Sheep gradually replaced cows as the mainstay of an agricultural economy. Commercial leases replaced the customary leases of old. The rough open pastures on the dale tops were surrendered to still further enclosures in the creation of grouse-shooting estates. Lead mining was a dying industry; and so families, squeezed from every direction, deserted the land in ever-increasing numbers. Ironically, many in fact became cow keepers and milk-sellers in the expanding industrial cities like Liverpool. The pillars of the old society had in effect been stripped away leaving our barns as a legacy not only to the past but also as a reminder of a previous way of life.