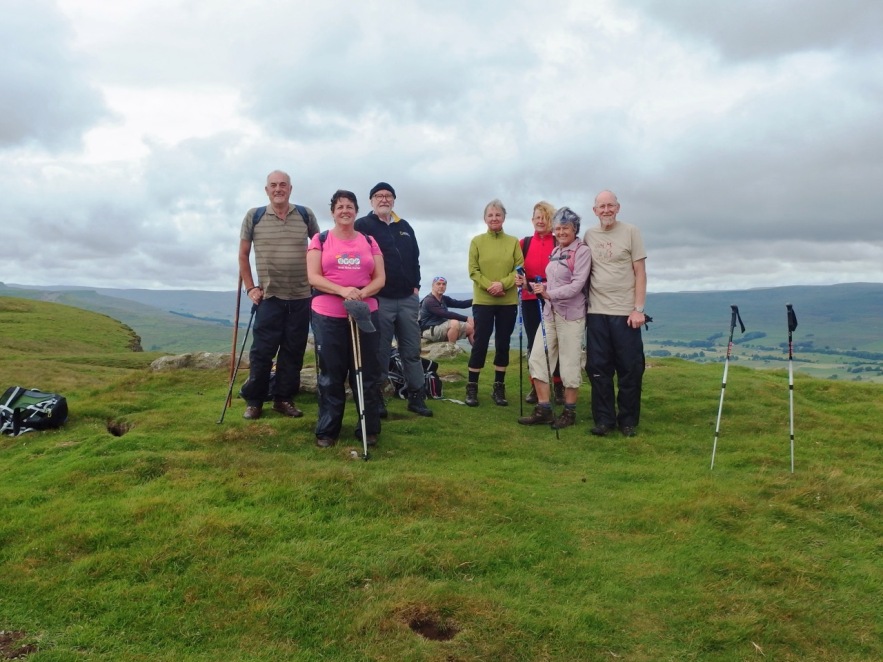 We arrived in Askrigg to find 4 walkers already gathered for the advertised 10.30am start.  In fact, through force of habit, they had been there for a 10 o’clock start and were beginning to wonder where their leader was.  The initial group plus Gwyneth, Dave and Carol Wilkinson and myself were joined (at the correct time) by Patrick.

The day started murky and drizzley. On arrival at Askrigg, we had just about see halfway up Addlebrough to the South, but, by the time we set off, the whole hill was obscured by mist.  Not a promising start.  However the later start meant that by the time we had walked across fields and the old Wensleydale Railway track-bed to Worton Bridge, the drizzle had stopped and the sky was clearing.

Through Worton, then a steady climb through more fields and stiles brought us to Worton Scar, and a slippery scramble up to the Thornton Rust road.  After a few yards along the road, a permissive path follows field walls then a gulley up onto the Northern flanks of Addlebrough.  We had a coffee break behind a stone wall, and, by now in warm sunshine, then headed up the steep final grassy slopes to the top of Addlebrough.  We enjoyed splendid all-round views, ideal for a photo stop to record our contribution to Trevor’s 50,000 feet in 50 days project.

Lunch was taken out of the breeze in an old quarry just below the summit before descending to a bridleway across open moorland with splendid views ahead.  We dropped into Thornton Rust then a longer than planned walk along a different section of Worton Scar due to navigational error as a result of a footpath sign pointing North East, instead of North West.  Re-tracing our steps we picked up the correct route back to Worton, and by our outward route, returned to Askrigg.

The day concluded in traditional fashion with an enjoyable drink and chat in the White Rose.  A very pleasant walk on what turned out to be a nice day after an unpromising start.