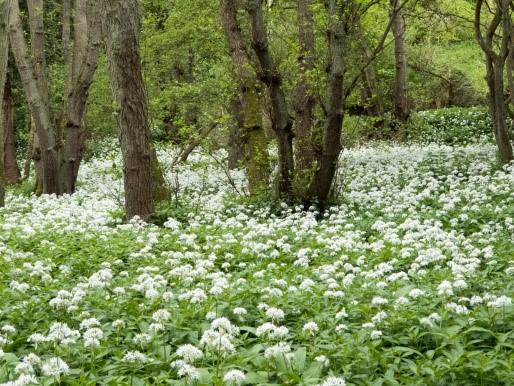 What a superb day’s walking from Slapewath, Guisborough that most people missed.

Dave Styan led an excellent 11 mile route that was full of interest and varied scenery but there were only two takers, Jill Wiseman and myself.

This part of East Cleveland has a wealth of mining history and as we set off northwards, briefly on the Cleveland Way Path, the grey shales of the UK’s first alum mine were immediately evident on the steep face of Rock Hill quarry. Alum was an important component of dye making and thanks to Guisborough’s Thomas Chaloner, the hitherto papal monopoly on imported Italian dyes was broken during the 1600’s. The top of the quarry, long since heavily vegetated in gorse, provided a good lookout south to Guisborough Moor and the National Park beyond.

Leaving the Cleveland Way we headed downwards and west through beech trees and bluebells towards the course of an old railway line which led previously, during the late 1800’s, to Skelton Park Ironstone Mine. Dave had had the good foresight to bring along a 1930’s map of the area and throughout the walk we were able to piece together the course of old branch lines and industrial remains that became the bedrock of Teesside’s development. As we approached Waterfall Beck we could see the remains of an old ventilation shaft slowly succumbing to time, decay and vegetation. It’s a good kilometre from this shaft to the mine entrance and in its heyday it must have provided a welcome gush of fresher air to the miners beneath.

Supplies and services would have been in great need as ironstone mining expanded the local population and our route north, following Mucky Lane, brought us to our next point of interest, the water driven four storey flourmill at Tocketts. Fully restored by the Tees Heritage Trust the mill is open to the public on some days during the summer months but sadly for us, not on May 19th.

Onwards and upwards we climbed out of the valley of Tocketts Beck to the dizzy heights of 179 metres (587ft) at Beacon Moor trig point from where we had exceptional views to all points of the compass; east down the coast to Boulby Cliffs, south to the moors, west to the Eston Hills and north to the sea, Teesmouth windfarm and the remaining Teesside industry. If you have an interest, there is a wealth social and industrial history that can be unpacked from this one viewpoint.

We continued northwards down a steep slope and found a pleasant place for lunch in Errington Woods, another formerly mined area but now a nature reserve, community forest and green lung for the expanding population of Teesside. Here we met runners, walkers, mountain bikers and horse riders but there was room for all, including the wildlife. The light through the spring canopy is magical at this time of the year and the woods were rich in birdsong and plant life.

After contouring the wooded hillside our path began its return journey southwards, skirting the small village of Upleatham with its quaintly small church and then dipping towards Skelton Beck whose wooded sides were definitely ‘onion’ with their profusion of wild garlic. The beck itself ambled peacefully along but the ochre staining of its banks was an irremovable reminder of the ironstone beneath. The 12th century church is only part of a larger building that existed there previously.

Now another climb from the valley floor, over fields and up past rows of proudly kept former miners’ houses at Skelton Green where, once again, we joined the Cleveland Way Path. Traditional allotments added to the interest of the scene. Dave, true to form, soon led us off the obvious return route and we headed for Margrove Ponds nature reserve and the course of yet another old railway. What a hive of industrial activity and community this whole area must have been! The ponds are managed by The Tees Valley Wildlife Trust but their origin is, of course, mining related. The disused railway ran from Middlesbrough to Boosebeck. We followed it past the remains of a crumbling old tilery which operated here between 1867 and 1879 and soon found ourselves back at our starting point.

As you can see, Dave devised an excellent route with points of interest around every corner. What I haven’t let you know just yet is that this route was also a walk down memory lane for me. I grew up in nearby Guisborough and most of it was within the playground of my youth.  As adventurous urchins we explored the ventilation shaft, caught trout in Waterfall Beck and paddled our boat, an old metal bathtub, in the deep water above the weir at Tocketts Mill, we exercised a lot and our imaginations ran riot …….  what a great time was had by all!

Thanks for this walk Dave, I think it’s certainly worth repeating in a future walking programme.