It's been a funny old winter. It arrived very early with a vengeance. Late November & early December brought the usual havoc that a reasonable dump of snow at low levels brings. Several groups were out enjoying themselves on cross country / touring skis. The Brooks family mixed skiing and sledging at Dalton over several days and Ann Jones and Kay West enjoyed some cross country around Stockton. We attracted a large crowd to a "cross country" taster at Westfields on 4th December, although the snow had softened for the day and made going a bit heavy.

Andrew and Mark enjoyed a good day in Teesdale from Langdon Beck to Fendrith Hill and Chapelfell Top. 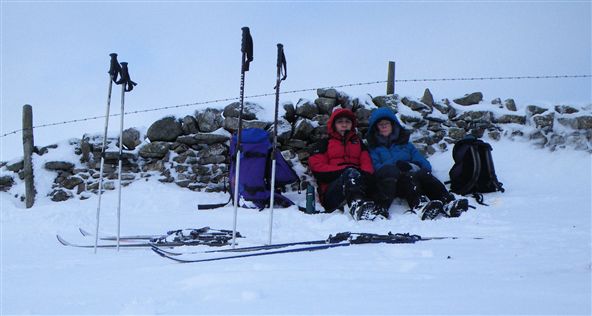 I took Alison out for lunch on 7th December to celebrate our wedding anniversary. With down jackets on we ate our sandwiches in the lee of the wall on How Tallon, having skied there from Barningham. We skirted Osmaril Gill and made slow progress back through very variable snow.

By 11th December, a warm spell moved the snow line up the hills. We expected travelling to be much easier and the snow to have consolidated. Andrew and I planned an attempt at Mickle Fell from the summit of the Lunedale road. The warm wind had had a devastating effect over a couple of days. What we had expected to be enough snow to last into March had been pretty well stripped and the remaining patches weren't sufficiently continuous.

Instead we headed up to Harwood and beyond. We wondered whether the woods above Garrigill may have created some sheltered patches or if we could take advantage of the Yad Moss snow fences. The woods were no good and we didn't fancy Yad Moss (even though the downhillers had cried off). Instead we chose a line of snow patches up the hill just east of Harwood ski tows.

We thought that we may skin up a short distance, run out of linkable snow and have to run up and down the same area a few times, but each time we ran to the end of a patch, a short plod (with skis on) across the heather led to another patch and so on. Up to the top of Scaith Head (I think that's its name - the hill at the top of the Harwood tows) and we thought that would be it, but the peat hags had reasonable snow between them and we carried on, picking up the ridge fence. With only a couple of 'plods' we linked the snow to the top of Burnhope Seat and slightly down the Burnhope Burn side (which wasn't great). We headed back following our tracks with almost 200m of enjoyable descent.

Cold temperatures returned through Christmas, but with little fresh snow. The Brooks family took advantage of the same snow patches around Harwood for some fun skiing (including the inauguration of the "Daddy ski tow" for Isobel's shiny new (well, eBay new) downhill skis) and were even snapped by a passing Northern Echo photographer! On 3rd January we headed for the North York Moors and found some excellent linked patches of firm icy snow at the head of Rosedale. This provided several hours' entertainment followed by a pint in the Lion.

Several days of thaw, refreeze, rain, freeze, etc. produced some treacherous roads on 9th January. Alison and I found the A66 much better than the minor roads and made it to the top of Hartside Pass. With fresh snow on a decent base, we enjoyed probably the best ski of the season south along the ridge to the base of Cross Fell and back. Failing light for the last part meant we judged the turnaround just about right with the limited available daylight.

I managed one day on skis as part of the annual Winter Munroes trip in mid-February (see Richard Wright's reports in the walking section) and a short blast out in the mist on barely sufficient snow in Upper Teesdale on 19th Feb and that was it locally. Despite all that early promise, the season was all over far too soon. Harwood was only open for 4 days! In Scotland it has been a different story with the 3rd successive excellent winter. Again Cairngorm seemed to fare the best with skiing through to Easter (and plenty up on the plateau for committed tourers well beyond).