Further to Paul’s section report in the last newsletter, there was also some action around the North Yorks Moors. I got out on langlauf skis from my house in Guisborough on four occasions during December and November. At first I was able to ski from my door along the road but overzealous neighbours digging paths soon put a stop to that. The circuits through the woods and out onto the moors were tough going in deep and soft new snow, but by mid-December the conditions were quite good.

I had always wanted to ski across Gisborough Moor to the pub at Commondale, and 21st December was the ideal day, very cold with consolidated snow covering the heather and glorious sunshine. I strapped my skis to my rucksack, waved goodbye to my curious neighbour and set off for the woods. Five minutes later, I was herringboning my way up the woodland tracks, pushing hard on my bamboo ski-poles. Yes, bamboo! What of it? Then it was out onto the open moor towards Penrod Hill. A short while later I ducked in alarm as a low flying jet buzzed me very close. I saw the undercarriage in rather more detail than I wanted. I must have been visible to the pilot in the landscape of snow. I tried to shoot the bounder down with my poles which for a few moments became a machine gun, but he (or she) escaped.

The rest of the trip across North Ings Moor was pleasantly uneventful and I reached the road at Commondale less than 2 hours after leaving home. The Cleveland Inn was open but deserted when I arrived. I banged on the bar for a while and eventually the landlord appeared. He was surprised to find a skier at the bar, but he was very happy to pour me a pint of Guinness and make me a big bacon and 2 egg sandwich. I sat by the open fire and read his usual collection of redtops. Then it was time to head up the hill and back across the moors to get home before dark. 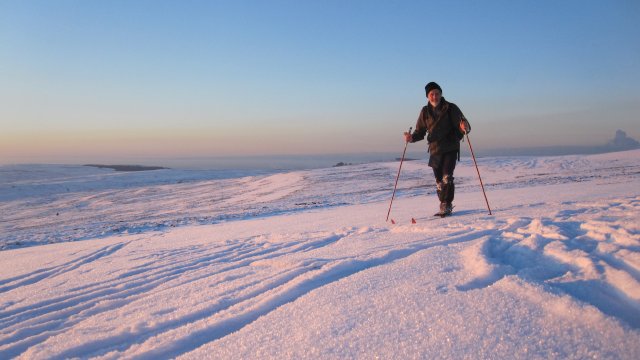 I made a circuit by going back over Park Pale, deliberately making ski tracks up the lane towards North Ings Farm to confuse Nigel, the local gamekeeper. Later, I stopped for a while to take some photos. There was definitely no-one else out on the moor that day. The large number of ski tracks was the result of my attempts at self-portrait. I set the camera for delayed exposure, perched it on a rock and then had about 10 seconds to get into position. After several failures I eventually got a decent shot with me in it. I waited for a while to take another of the glorious sunset behind Captain Cook’s monument in the distance.

Then I headed back over Penrod Hill for a long descent through Guisborough Woods. The steep descent of this narrow track is often difficult on langlauf skis, especially using snowplough, but this time the snow was so deep that I could do a slow parallel glide. I arrived back home in the early darkness, receiving a cheery wave from my neighbour as I passed by her window once again. I got out on the moors again a few days later on Christmas Day, and then that was the end of the local XC ski scene for the winter. Still, I had a glorious week of downhill skiing at Zermatt/Cervinia in mid-January.

I got a final day’s downhill skiing on Aonach Mor with Mark Ireland in February during the climbing section winter mountaineering meet at Tulloch Station Lodge. We had done two days hillwalking in very difficult conditions and wanted to do something different. Mark did a short ski tour to the summit during the morning and then spent the afternoon dodging the piste patrol who, we were told, took exception to the ice axe strapped to his rucksack – not allowed on piste apparently!