This year's skiing trip to Norway visited a new location - Kvitfjell. We'd received favourable reports from Norwegians and it has easy access from the Oslo - Trondheim railway. Kvitfjell was created for the 1994 Lillehammer Olympics. There is a good range of downhill skiing with plenty of wide, easy greens and blues up to the very steep black Olympic downhill run which goes from the top of the mountain down to the railway in the bottom of the valley. The cross country network is very varied and extensive and connects with those from other nearby resorts Gala and Skeikampen. The long distance Peer Gynt Loypa passes through Kvitfjell. 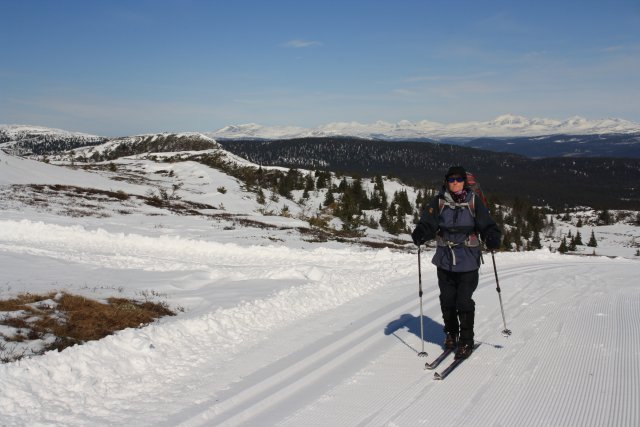 We arrived via aeroplanes, bus (there were works on part of the railway), train and taxi. The valley was snow-free and the taxi thermometer showed 13°C! We picked up the accomodation key from a box outside the booking office (I love Norway!) and the taxi climbed the winding road up the mountain. The temperature reduced and soon we reached the snow line. Our accomodation was an apartment in a block of 4, traditionally built in a log cabin style. It was the usual extremely high standard we're used to in Norway with plenty of space. There were 4 bedrooms: girls (Philippa and Isobel), boys (Geoff and Rodger), Astrid, Alison and me.

Monday saw all of us skiing or walking down to the ski shop and everyone was soon kitted out in kit for the week. We spent the day downhilling and finding our way around. The girls had their first ski lesson with their cheerful Argentinian ski instructor Santiago. Astrid and Rodger took a lesson in the afternoon too. We stocked up on supplies and found the route 'home' (the apartment was 'ski-in, ski-out', but the ski-in part wasn't that obvious and created a bit of adventure! The weather was worryingly warm, the snow was very soft in the afternoon and there was quite a lot of meltwater around. That night it started to rain, then (as forecast) the temperature dropped and it turned to snow.

Tuesday morning revealed a cover of fresh snow. There was still quite a bit of running water, but it kept on snowing and put down around 6" during the day. Geoff joined Alison and me to explore some of the cross country tracks. WIth the deep fresh snow and occasional water hazards, this proved quite energetic, but we thoroughly enjoyed our day. The others explored more of the downhill.

The weather settled into a very agreeable pattern; freezing overnight to produce crunchy, firm snow in the mornings and bright sunny days, leading to soft spring snow in the afternoons. All the adults managed at least half a day on touring skis on cross country tracks. Using the chairlifts to get to the top of the mountain led to a particularly enjoyable long cross country descent down the other side. Rodger and Astrid concentrated on their downhill technique and explored all the open pistes. We managed to share time with the girls and going off to do our own thing in a very relaxed and informal style.

Kvitfjell was superb. We managed plenty of skiing and fresh air, but also plenty of relaxation in good company. Thanks for joining us and making it a great holiday.

So where to next year? We'll be going - watch this space...