What goes up must come down – eventually! 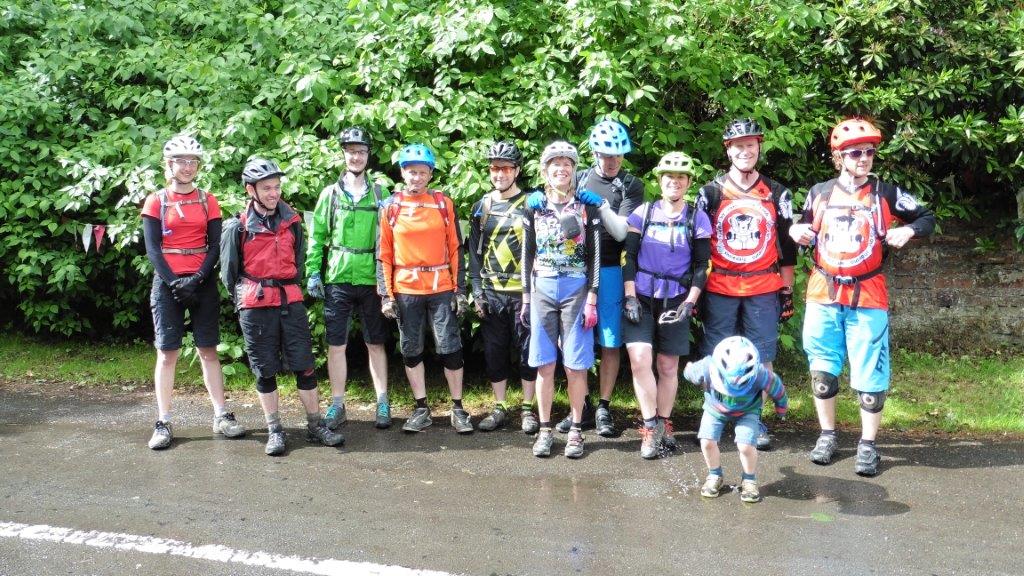 Since it was a good 2 years from our last outing up the Calf we figured anyone who had done it then (Mike) would have forgotten the detail and anyone new would just come along for the ride – or push depending on how they felt! Considering the forecast (rain) and the terrain (grass), Alex decided to make it a double for the weekend.  The rest of the group joining Steven and I was Phil, Mike, Liz, Ian, Rob, Mark and long- time no see – Jonathan. What a great re-introduction to mountain biking with SOC! We started with a photo call and puddle splashing courtesy of Leo then watched Rach chase him up the road on his bike – fast as lightening that lad! The weather was a bit grim to start with so we all set off with waterproofs but I think I am right in that we never got wet other than a few spots of rain and it did warm up as the day went on

Cribbing the description from last time and in case anyone wants to know where we went:

Leaving Ravenstonedale, the road takes you along the West side of Harter Fell before picking up the bridleway towards Murthwaite followed by fun descent through Murthwaite Park . At the bottom of this descent is a stream crossing which I ended up swimming in last time – luckily it was only a few wet feet this time but Mike made sure he had the camera ready for any casualties.

After this comes the fantastic singletrack past Cautley Beck and all the way to Fawcett Bank; despite being warned about not falling to the left, Rob did make a gamely leap from his bike down towards the stream but managed to stay upright. He did have another go further on the track but luckily Mark decided to have a mechanical so we could all have a rest. We were well entertained as Phil and Mark attempted to sort the tubeless tyres – eventually surrendering to what we all suggested at the start – put a tube in it! No one really minded as the sun was out and it gave Liz and I the opportunity to do artistic selfies in the foxgloves!

After the break we continued on the track before picking up the road at Ellerthwaite to head to  Sedbergh for coffee. We opted for a pavement stop as we all had too much sheep poo on us to stay in the café.  We also stocked up on goodies for the next part of the ride…..

The big pull starts off as a grassy climb at Lockbank Farm. Mike had to have a stop to put some air in his tyre but other than that a good effort was made by everyone. Phil took the 25p chocolate bar challenge and succeeded in riding all of the climb but just had to stop at intervals and get back on track against the wind. 25p choc bar well- earned. Alex did a superb climb with what Steven described as her ‘dinner plate’ of a front chain ring. We did have another tyre moment with Mark – this time a straightforward pinch so the guys quickly changed the tube before completing the ascent. At the top we armoured up and took on more food before hitting the 4 miles of singletrack running through the Howgill Fells along Bowderdale. I did have to stop to get my circulation back in my hands as couldn’t tell what was going on with the front brake – Liz’s idea of doing the twist on the side of the hill worked wonders! I think Jonathan was regretting not having his body armour but managed admirably. Ian said we needed to re-grade the ride to ‘hard’ – none of this medium business – but if we had he wouldn’t have come and took to the challenge admirably.

We all eventually re-grouped at the end of the track and concurred that it had been another ‘grand day out’. A quick blat along the road to meet Rach and Leo, car park striptease and off home for tea