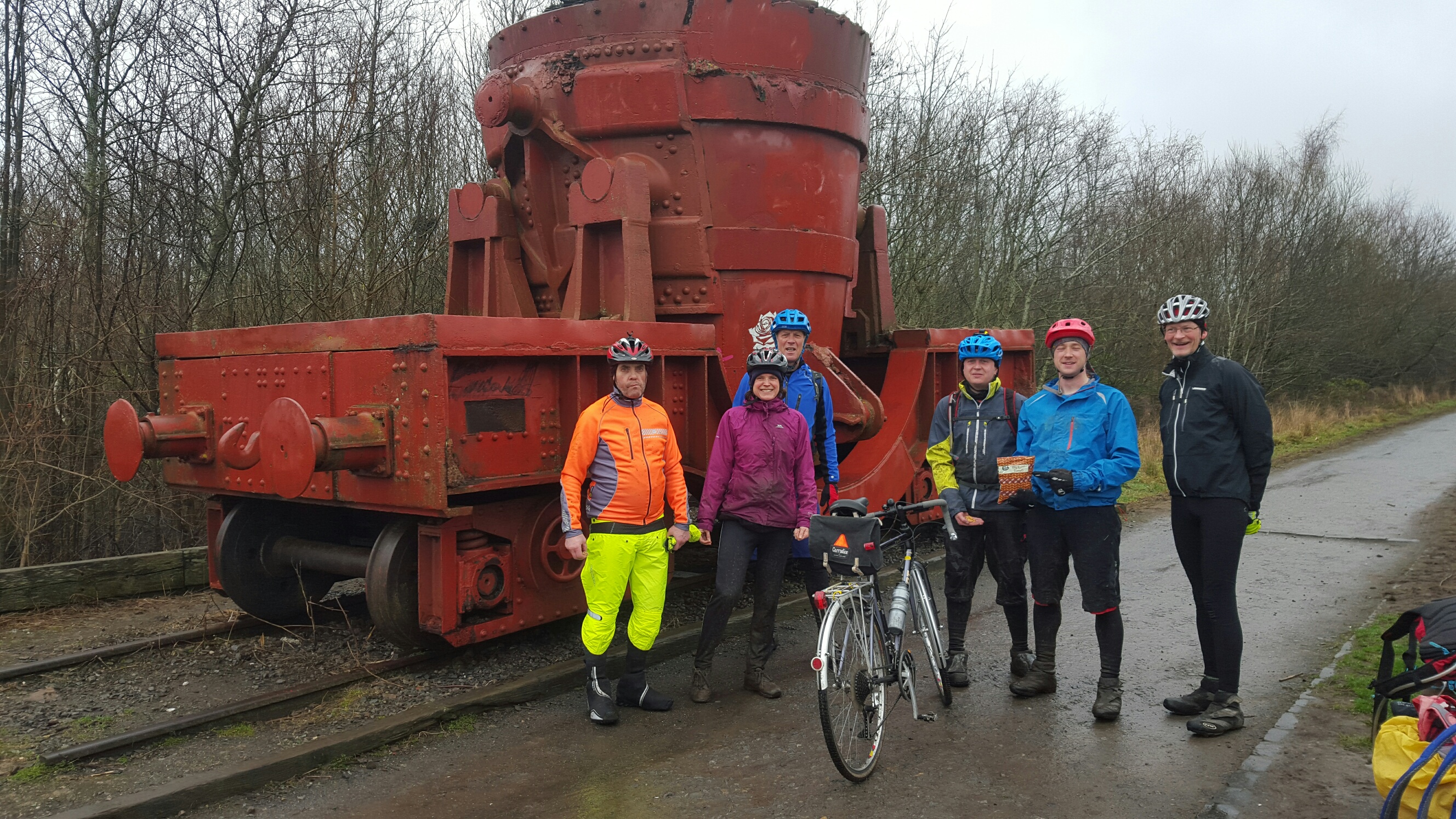 Despite rigorous protests (from me), Steven insisted on putting the Waskerley Way on the programme for January. His argument being that there would still be people who had never been subjected to it (sorry ridden it) and others who would just forget. There would also be the ‘odd’ person who enjoyed it and wanted to ride it again, and again and again…..

Sunday 3rd January was the chosen day and we had 6 starters; Phil, Mark, Steven, David G, Jenny and myself. Jenny was the newcomer so we can forgive her but the rest of us fall into the category of plain daft. David was sporting some rather fetching leg covers in day-glo yellow that actually seemed pretty clever and left him having the last laugh. We were expecting Johnny P (also mad) but as he hadn’t materialised we headed off. I have to say it started fine – no wind and a lot easier to ride on the cross bikes that Steven and I had chosen to bring. Jenny set the pace quite high and we had to keep pulling her back. At Ebchester we stopped to call Neil G who was going to ride from Lanchester and meet us at the iron crucible, Consett – about 5 miles further up the track. At the same time I picked up a message from Johnny who had found the car park and was chasing us down.

We arrived at the designated meeting point and Neil (mad too!) arrived within a couple of minutes and had time to show off his snazzy kickstand. Taking in a snack it also allowed Johnny to reach us in a breathless state having chased hard to catch up. We gave him at least a minute to catch his breath before setting off; the aim being to get to the cafe at Parkhead before the rain. Unfortunately the pace was a bit high and Johnny peeled off early leaving us to tackle the last few miles into the wind that managed to show up just for the fun of it.  I have to say it was quite a cheery bunch who sat down to scoff soup, hot beef rolls, cake and lashings of custard; it was not such a cheery bunch who left. The rain had set in and the wind was in our faces and across us making it somewhat cooler. Steven got a puncture that we had to fix so that slowed us a bit. Once that was sorted it was heads down, pedals whirring and lots of puddles to get through; it was quite fun in it’s own way especially seeing the state of Mark at the end who looked as though he had done 10 downhill runs at Innerleithen not a ‘flat’ disused railway! His comment ‘I found a whole new level of wet today’ summed it up nicely.

Various stripping in the car park ensued and we all headed for home. Well done everyone – you can enjoy at least another 365 days before it happens again!