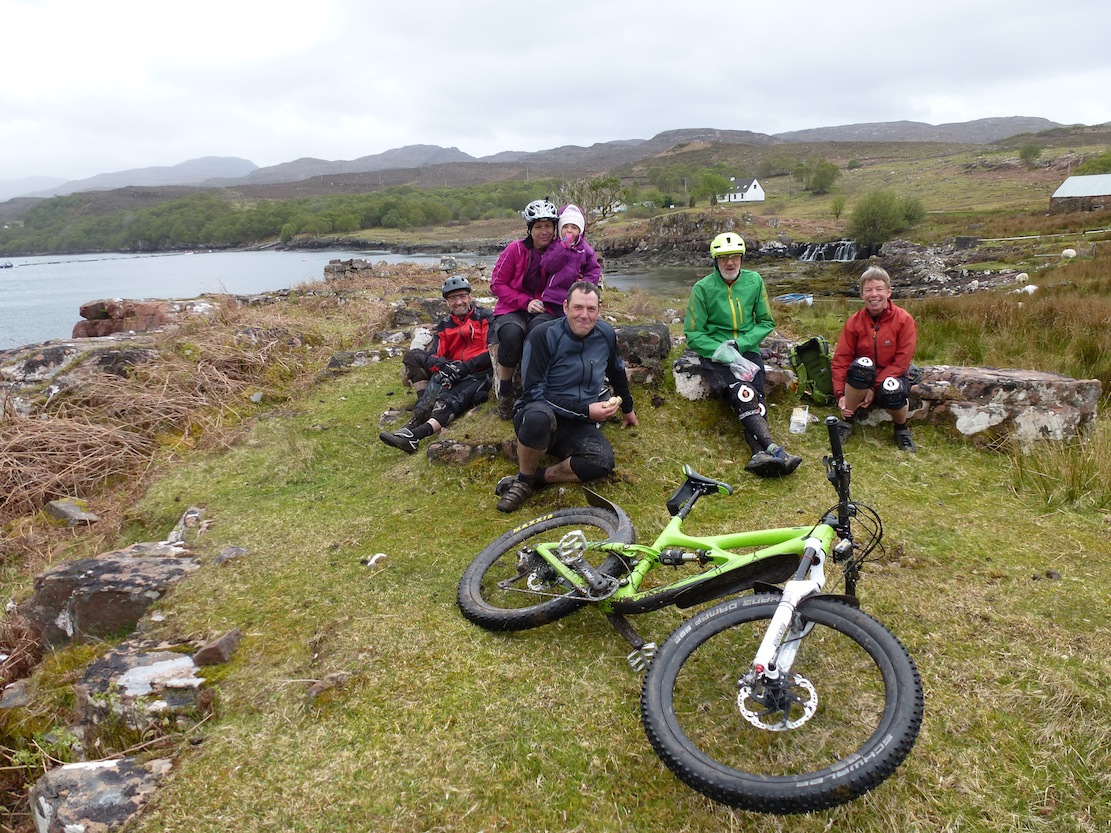 The mountain bike section decided to visit Torridon in North West Scotland for the end of May Bank Holiday this year and it turned out to be a popular choice. Seventeen adults and three small children set off at intervals from Yorkshire but unfortunately Mike and Liz didn't get very far before their car suffered a major breakdown and they were forced to head back home. All the families (Rach, Phil, Leo, Sas, Nev, Skye, Davinia, Andy and Arabella) found an excellent house to rent in Strathcarron and they arrived well ahead of everybody else and got stuck into the biking before the rest of us arrived. Alan and I were next to get there shortly followed by Dave T ( who had been Munro bagging), Neil, Ian (whose vehicle also broke down), Karen, Andy, Simon and JB. Most of us stayed in a very pleasant B&B in Lochcarron whilst JB and Simon were in the local hotel.

The first actual SOC ride was on Friday when various of us met up in Applecross (after an exciting drive over the Bealach na Ba) and did a very good route over an old track that cut north across the peninsula to the sea. The riding was fun and the weather mainly dry, we lost Neil for a short while when he went to check out a stained glass painting shop by accident but he found us again fairly soon. Sas met us on the far side and swapped with Nev for the return leg before a final rendezvous at a very pleasant cafe in a walled garden.

Saturday's ride involved about three windy and showery hours devoted to getting our bikes up to a very high col in the middle of the Torridon hills - some riding but also a substantial amount of hikey bikey. Dave T and Neil decided to go for a walk to bag another couple of Munros for Dave, we met up with them at the col after we had eventually all carted our bikes up the last vertical cliff. The descent began but my hands and feet were so cold I rode the first loose and flowy half like a muppet, the second half is a technical rocky challenge with some very tricky switchbacks but by that time I was warmer and having a great time. We all met up a couple of thousand feet and a few miles further down to compare notes and get our breath back. That evening our B&B provided an excellent meal for nine of us and we had a very socialble evening together.

On Sunday we all headed over to Skye as the weather looked less showery over there. Alan and I went off to recce a new ride that headed along an old marble quarry track before heading down to the shoreline by a ruined village and following some interesting singletrack just above the high tide line. A bit of hikey bikey to get back up the cliff but a worthy addition to our repertoire of routes on Skye. Everybody else went to ride the valley below the Cuillins that leads from the Sligachan Hotel to Camasunary, a classis Scottish ride that every mountain biker should do, lots of rocky singletrack and then the same again on the way back.

Our last day dawned cool and showery once again so Alan, Dave T, Neil, Ian and I decided to head up to the col behind Liathach, this involved more hours of hikey bikey but we ended up amongst magnificent mountain scenery to eat our picnic lunch. The descent was rocky and entertaining but had rather too many wide water channels to slow us down, we need to get better at bunny hopping (without pinch flatting). Another classic route though to round off the weekend. Most of the rest of the team did a longer loop to take in the excellent descent to Annat by Loch Torridon.

People mostly headed off on Tuesday but Andy, Karen, Simon and JB went up to Golspie to ride the trail centre again and Alan and I headed over to the Cairngorms and Deeside for another week. The weather stayed cold and showery but we had plenty more riding and tried out the new trail centre at Glenlivet (great fun), rode up towards the Lairig Ghru to see how low the snow had got, explored the fishing paths along the River Findhorn and found new singletrack over near Ballater.

Thanks to every one for coming along, despite the cool conditions we did a lot of riding and had a lot of fun.