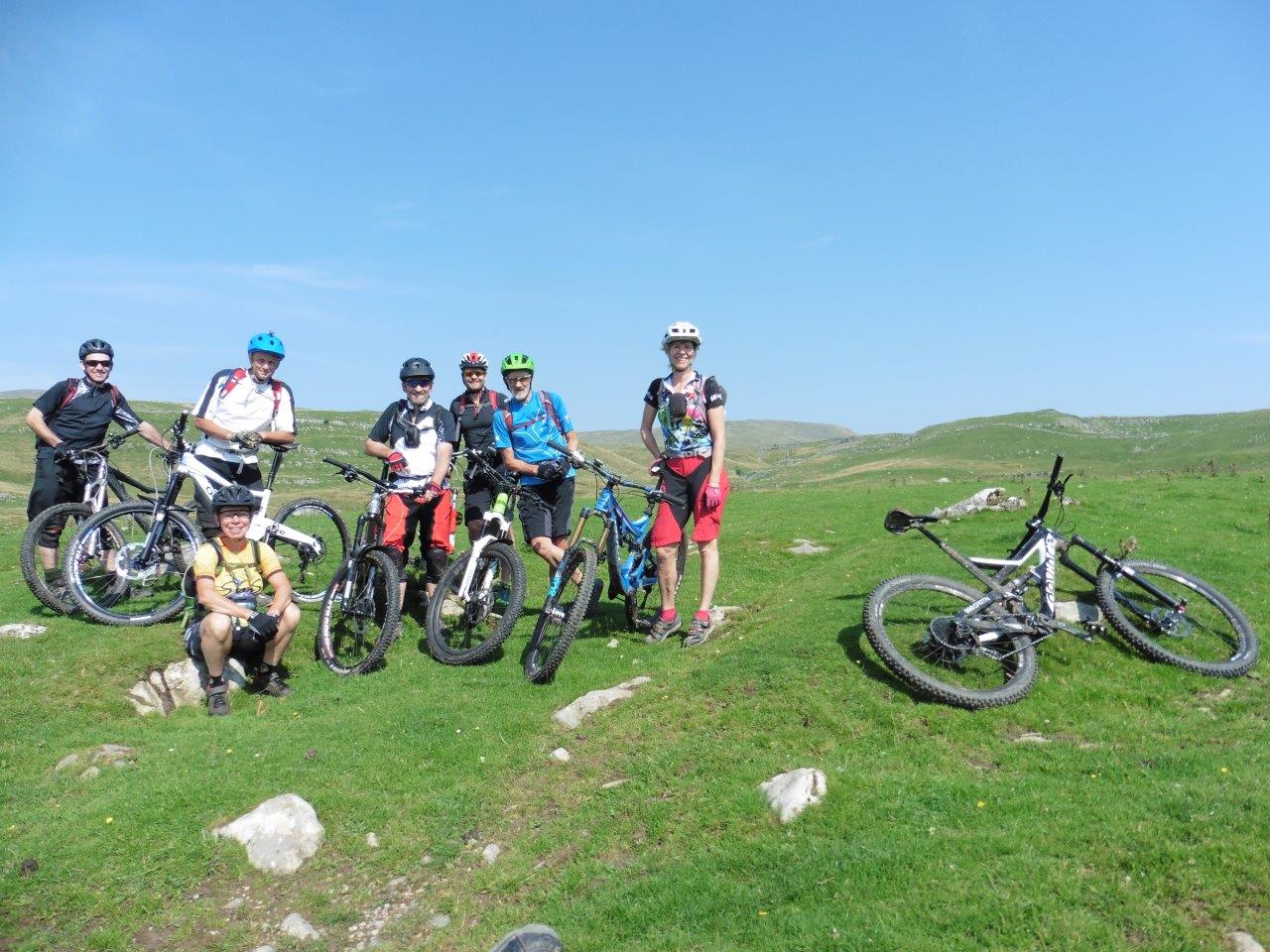 As the South Dales are a bit of a trek to get to, I scheduled a weekend in the programme for August for 2 days riding with an overnight stop. As we got nearer the date it turned out that quite a few folk were away and the weather was looking a bit ‘iffy’. Alan and Sarah were the only people other than Steven and I who could enjoy the whole weekend therefore it was 3 against one when I suggested doing the Stainforth to Littondale ride. To be fair it was possible that it might rain all day so Sarah suggested Aysgarth and Steven countered with an offer of Buckden.

Steven and Sarah conferred in the car park and agreed it was an opportunity to do some exploring so off we set on the bridleway towards Litton and over Old Cote Moor Top. The climb was a bit of a slog but not too bad as parts of it have been slabbed. At the top instead of taking the usual descent, we headed along the top of the fell following the ridgeline which proved to be a lot of fun and just the right amount of bog. We stopped for a bite to eat before heading downhill picking up the bridleway to Kettlewell for a well earned slice of cake. Out of Kettlewell we took the delightful (not!) bridleway towards Cam Head – this just as the sun decided to beat down making those waterproof shorts particularly pleasant. The descent to Starbotton was fast and loose in places but finished off a very enjoyable ride.

As we had already booked accommodation at The New Inn at Clapham, we then had a wonderful scenic drive through the Dales to arrive at the recently refurbished hotel. There was me looking forward to a lovely cup of tea when Alan suggested some light refreshments in the beer garden; who were we to refuse? The rest of the day was passed enjoying the food and beverages – well until 9.30 that is when Steven had to retire as his few days of travelling and lack of sleep caught up with him.

Yet again my planned Dent loop was sabotaged and not just by Sarah this time! Neil S arrived in the car park advising that 50mile per hour winds were due to arrive just at the time we would be furthest away and probably at the highest point. Karen decided not to come due to said winds and Steven also wanted to change the plan. Since I know very little about wind direction apart from when it’s in my face I bowed to their better judgement and went off to buy a sandwich to get change for the car park machine. It’s just a shame I forgot to buy the ticket when I got back and only realised when we were 2 miles up the road…..

Anyway, joining Alan, Sarah, Steven and I were Neil, Mark L, Ian and a mate of his called Dave ; Ian said he needed his legs pulling off so we duly obliged by doing the Tour d’Ingleborough; a 26 mile enduro according to the book but don’t believe the 700m ascent as it is actually 1100m! To be fair to the saboteurs, the route choice was excellent as the wind that blew at us was generally warm and not so bad and when we needed it, it was at our backs helping us along. The route is a classic starting in Ingleton and heading back to Clapham for the first 3 miles. The off road adventure starts with a climb through a dark slippy limestone tunnel then over a grassy plateau to Long Scar. Here I am going to simply copy the text from the book as it sums it up wonderfully: Drop easily into Horton on tarmac and follow the lane to Old Ing, joining the Pennine Way and passing ancient woodland at Ling Gill, The Ribblehead Viaduct looms and you pass beneath it before picking up the bleak and often indistinct track across Scales Moor with Ingleborough away to the left. A belter of a descent down a grassy zig-zag takes you to the road and fast lanes back to Ingleton where you can have an ice cream and collect your parking ticket. This last bit is my own personal adaptation to the end of the ride; feel free to put a ticket on your car and avoid the fine…..

Despite the change of plan, it turned out well; what’s not to like about a sunny day in the Dales on your bike – beautiful scenery and good company