Our first SOC trip to Ballater 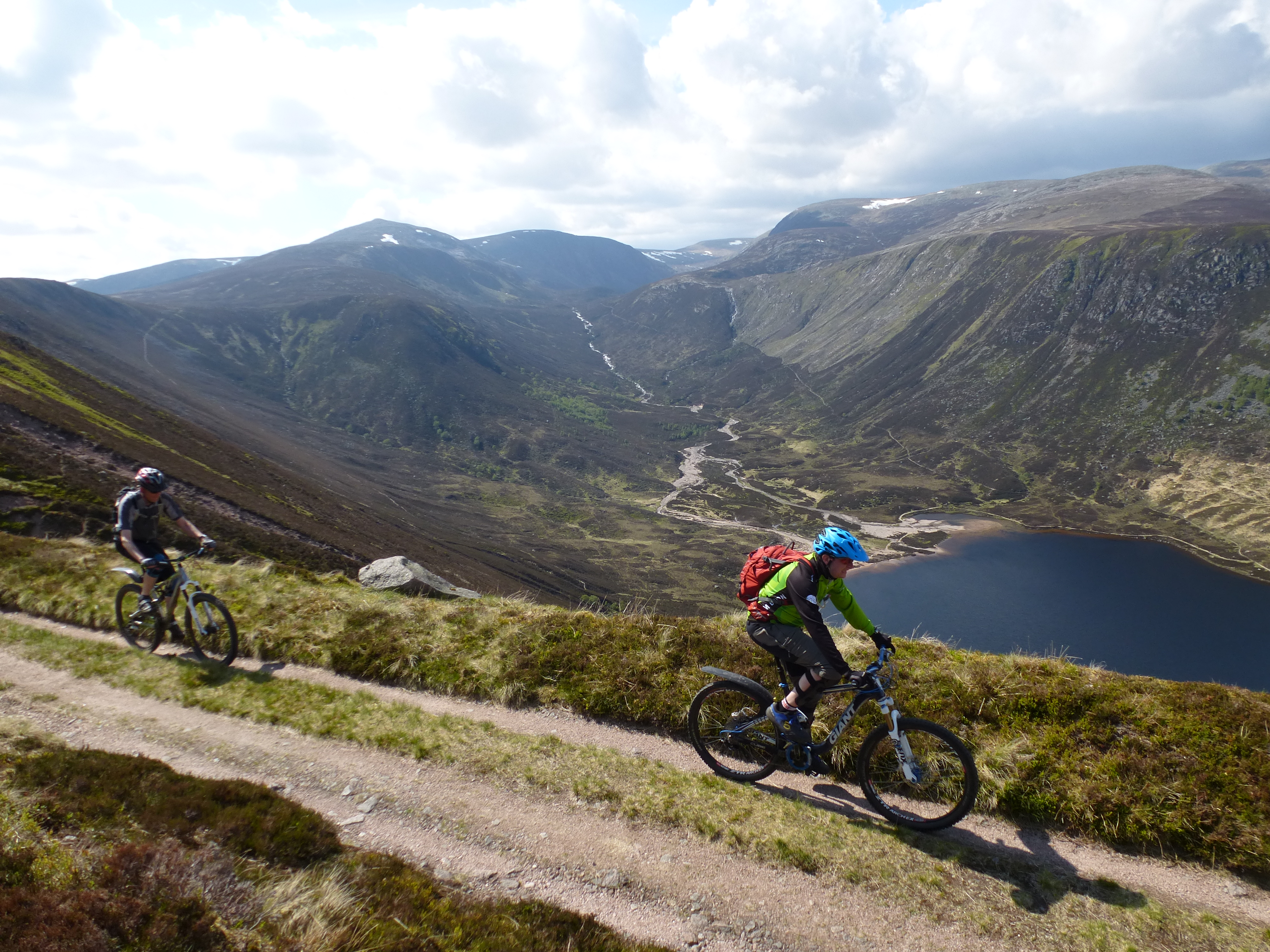 Alan and I had a short visit to Ballater on Deeside last year in showery weather and decided that it was worth a team outing this year. Twenty four of us assembled over the weekend - Sas, Nev, Skye, Phil, Rach, Leo, Davinia, Andrew and Arabella in a large house with lovely views and everybody else (Judith, Steve, Neil G, Kathryn, Karen, Andy, Mark, Neil S, Dave, Yvette, Ian, Russ, Simon, Alan, Sarah) in various B&B, hotel and hostel places. The weather was set fair and we were all looking forward to a great weekend.

Saturday; the families hadn't arrived yet so the rest of us set off to explore the hills to the south of Ballater. A slog up Cairn Leuchan was first with a long, grin inducing run back down the other side and then a chain gang to get about twelve bikes over the seven foot high deer fence. Sandwiches and we headed off for the next climb - en route Steve and I nearly fell off a ten foot vertical drop where the tarmac road had been completely washed away by the floods in late December, we'd seen the signs saying "Road closed" but it was more like "Road disappeared". We finally ended up on top of the Coils of Muick (good name) with the group split between two competing summits. The singletrack that followed is a local classic known as the Green Mile and was excellent, a good long descent that ended up with a sweeping forest track. We were just about to start heaving bikes over the final deer fence when a keeper screeched to a halt in his landrover and we thought "Oops, hope we're not in trouble!". But no, he got his key out and unlocked the gate for us!! Fantastic service, our ride was on the Queen's estate so she's obviously got her staff well trained! Fifteen of us ended up in the local Indian for a very good meal (good food and service at the Lochnagar Indian Brasserie).

Sunday; beautiful weather all day; sunny, not too hot and great views. We joined the merry throng parked at Loch Muick but soon left the crowds behind as we climbed up the Capel Mounth track high above the loch to the col overlooking Glen Clova. The singletrack descent in front of us looked very inviting so we all set off down with various people stopping for photos en route. Russ was having brake problems by this time and halfway down was having to walk as his back brake gave up completely so he decided to head back and visit the bike shop. Nev managed to burp most of the air out of his tubeless tyre so I left him and Alan sorting out the problem and carried on down. Great, quite technical singletrack led down to the forest where we assembled to wait for Nev, just as he got to us he hit something else and his tyre immediately collapsed again so time for a tube. More flood damage up the valley meant a bridge was down so we had some off piste riding, Nev decided it was too lumpy so he just rode in the river up to his crotch in water (no accounting for taste). We had a paddling stop further on (not sure why as we all had soaking feet by then anyway) and Ian threw the team jelly babies in the river (they sank). The day now got a bit arduous as we had a hefty section of hikey bikey to get us back to the col overlooking Loch Muick. Ian and I got to the top first and Steve decided that short legs must be an advantage when pushing your bike uphill. At this point we split into two, a smaller team took the less water channel infested route back and had a good long descent down. The rest of us headed down Lighting Strike, the path down the back of the corry, that had quite a few wheel trapping water channels and was a challenging final way down. The last lap around the loch was beautiful in the sunshine. Team supper out at a local hotel, again good service and food.

Monday; Rach, Davinia and Sas joined us today (the boys came out yesterday and were on child minding duties) and we headed east to check out the Cambus O'May singletrack. Various circuits and bumps enabled us to try out the best bits including Roller Coaster and the path down by the Vat O'Burn - all the trails were dry and lovely. I fuelled up on pork pies and then got into trouble for zooming ahead on a swift circuit of the singletrack round Loch Kinord. By the time we'd finished we were all pooped and ready for a final refuelling stop on Ballater Green.

Tuesday; most of the team had departed by now but seven of us set off to explore more of the goodies Ballater has to offer. We flogged our way up two more large hills and were rewarded by a couple of great finds. A long, quiet, loamy, steep descent through the forest on one side of the valley and an open, dry, tortuous ridge line with lots of fun rock features on the other side of the valley rounded off Steve and Judith's riding as they were heading home after we finished. My legs were finished anyway by this time so a last trundle back up for an old footpath nearly did for me.

Wednesday; our last day before we headed home. All the families plus Alan and I headed to the purpose built bike trails at Glenlivet to check out the fourteen miles of swoopy, bermy trails looping around the hillside. As we drove over we headed into gloomy fog but it quickly cleared to give us another gloriously sunny day. We headed out in various combinations, Alan did the red route with Rach and Sas but my legs were toast so I did the blue twice instead. The kids had a great time and Leo managed most of the blue route under his own steam with Rach towing him up one or two long hills, pretty good for not quite five. A final gathering outside the cafe and that was the end of another great SOC trip to Scotland.

Many thanks to everybody who came and made it such a memorable weekend away, another one for the memory banks.