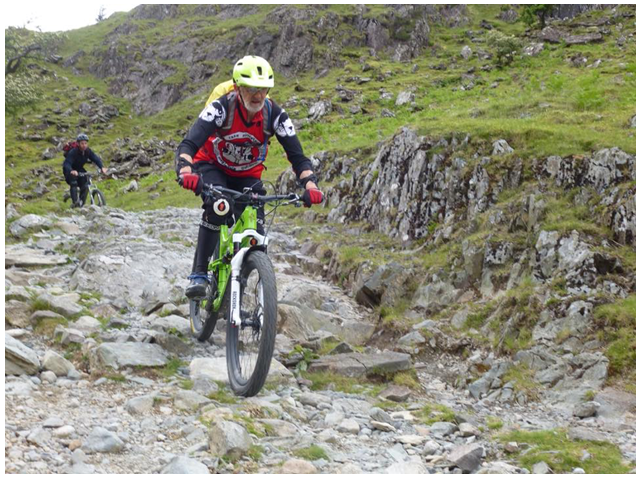 With the weather forecast not looking anything special across the north of the country it seemed to make as much sense getting wet in the Lakes as it did in the Dales or on the Moors so with a slightly delayed but minimal amount of faffing Mike, Liz, Alan, Sarah, Yvette, Mark G, Ian and I set of from the Bowderstone car park in rain.  We were all hoping that “some showers will merge to provide rain for one to two hours” would not prove to be correct and by the time we had reached the road to Watendlath the rain had ceased and never returned all day.

The push up the shoulder of Brund Fell was uneventful and with the trails now dry and dusty under wheel we set off down into Borrowdale.  Four of us had not done the Bash before so the loose, rocky and steep descent was all new.  Once all safely down to the gate above the woods Yvette explained how she had not fallen off but stepped off her bike to watch it bounce down the path before her to the surprise of two walkers.

A decision was taken to miss the Langstrath section out to allow time for Major Mayhem to include the Catbells loop before heading off to play wargames with druids and chemical weapons.  At least I think that was the plan.

Lunch was taken in a bus shelter which could only have been the fault of the planner.  Although as bus shelters go it wasn't a bad example of the species.

A fast and rocky descent from Castle Crag all the way down to the River Derwent was completed by all without punctures which is more than can be said for the old coach road below Catbells where the young Alan was all overcome with youthful exuberance and had to make a repair by stuffing a bit of twig in his tyre wall….. or so some of us thought.

A cream tea in Grange just finished off an excellent day.  Thanks to all who made it.