Grewelthorpe 'A call to arms' 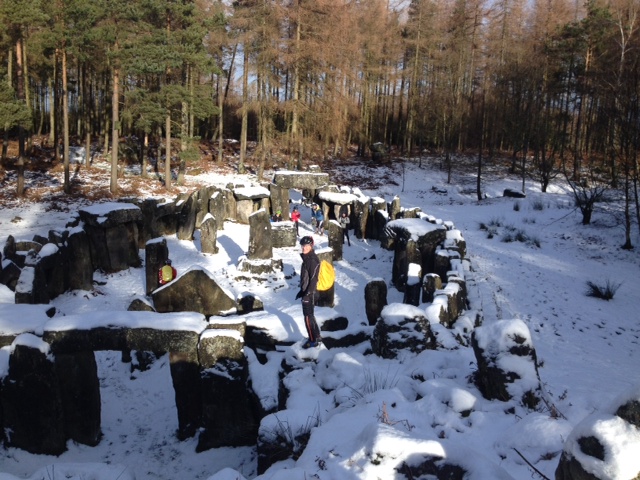 A good turnout of eight for the Saturday ride consisting of Nigel, Mark, Graham ( attending his annual Grewelthorpe ride ) Ian, Liz and Mike and two newbies Yvette and Tim.

Heading out to Foulgate Farm there is a nice short descent to the ford at Wreaks Beck, followed by a long haul up Wreaks Lane to Grewelthorpe Moor. We stopped while Mike repaired his flat tyre ( put a tube in his tubeless system having had no sealant left in the tyre). I had a chance to have a conversation with Yvette, she mentioned that Stuart from the Dales Bike Centre had given her advice on gear shifting for her 3 x 9 system. I informed her that my master no longer advised me as he has gone over to the dark side of 1 x 11 and had even departed further from the old ways by riding flat pedals.

We turned right at Langwith Cross which because of the snow was a slower descent than normal to the Firs. From the hillside  near Low Knowle farm there are fine views over across the Vale of Mowbray to the Cleveland and Hambleton hills.

Turning left at Manor Farm we headed over for a cafe stop at the Bivouac, a fast winding road descent to Sole Beck followed by a straight 1:12 ascent then turning left along Knowle lane. The Bivouac at High Knowle farm provided a warming rest. The only conversation I can recall was the value and merit of Ambergris ( Sperm whale vomit ) it's highly valued by perfumers as a fixative enabling the scent to last longer. Not sure how this came about but I did say to Tim that you can at least learn something unusual whilst out riding with SOC.

The Druids temple is a short ride to the plantation, Major Liz decided that a snowball fight was in order. I would like to attribute the better military strategy, by taking the high ground, to being versed in military battle formations. In truth Mike and I just went higher to get a different camera shot. She also indicated that the place made her want to do a dance. I thought that kind of tribal thing was not associated with Richmond and was normally linked with Melsonby.

We had a quick ride around the plantation woods and stopped for a view of Leighton reservoir, (which supplies Leeds)  and the land of Colsterdale.

Mike had a serious mechanical which curtailed his ride, and headed back to the cafe. Liz headed back to Grewelthorpe via the road to get the car. We headed off up to take the undulating descent via Fir Tree Farm. Mark found out that Tim lectured in Maths, I think he is keen on getting him back to help with his studies rather than recruiting new members for riding.

Back at Grewelthorpe we found The Crown was closed so we headed off to Masham for a drink and free chips courtesy of the shooting party.