A dry sunny day in Swaledale. 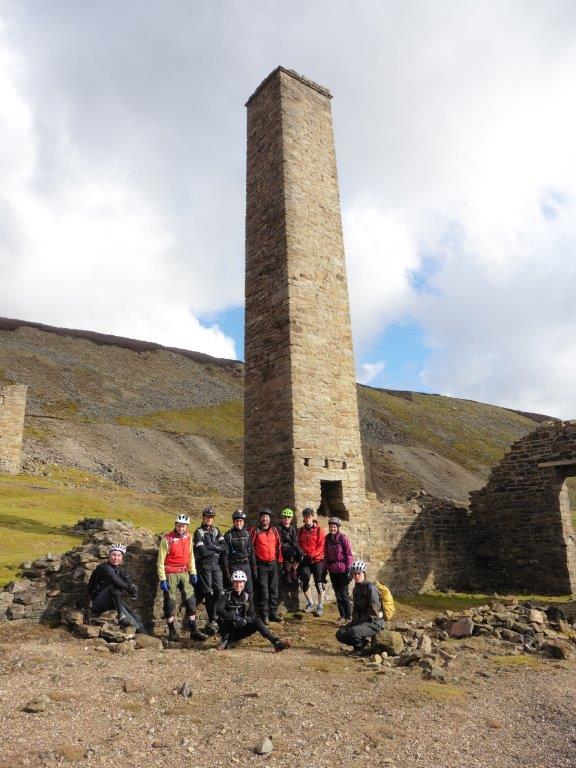 The promise of a ‘dry sunny day in Swaledale’ ensured a healthy turnout for the last ride of February. Joining Steven and I were Neil, Russ (nice bouffant!), Simon, Jenny, Mark G, Karen, Andy (nice to see you again), Mike and Liz.  Kathryn was also out for the day but headed off on foot so we caught up with her later at Dales. Mike and Liz had been leisurely reading the papers when they realised it was a 10.00am start so advised they would be running late. As it turned out, they were on time but Steven and I used the additional time for some faffing and we set off about 15 minutes late. In hindsight this was to be an omen for the day, especially where Steven was concerned!

For a ‘gentle’ warm up, we headed up the track at the back of the school which most people were used to riding down. Consequently at the top there were quite a few out of breath people and we had our first faff letting out some air from our tyres. 2nd faff quickly followed heading towards Riddings, where Steven, Jenny and Karen managed to flatten tyres pinch flatting on the water bars.  Once sorted we set off to Foregill Gate and onto Level House Bridge with faff number 3 for Steven as he changed his brake pads at the smelting works. None of this was too much trouble really as the sun was reasonably warm and the wind non existent. Then we headed across the moors to Low Row Pasture to take the fun descent to Gunnerside and a spot of lunch in the village. From Gunnerside we were going to take the coffin road then onto Crackpot but there is a road that runs parallel and, more importantly, higher up so we took that instead. From Crackpot we climbed and pushed our way up to Summer Lodge; as Russ said, it’s all good training for Scotland! This is a track that we hardly ever ride but we were well rewarded at the top with superb views of the Dales and also came across Swaledale Mountain Rescue. A bit more exploring of tracks and a bit more climbing (common theme for the day), we picked up the bridleway over Whitaside Moor. Heading over Grinton Moor, Steven managed another puncture that we quickly sorted before the downhill bits, including Desmonds, where Jenny also managed another puncture. A final teeny tiny climb rewarded us with the fast grassy finish over Cogden Moor. Finally after 24 miles and over 1200m of climbing, we were back in Dales eating cake! Well done to one and all for a big day out so early in the year. Hopefully we are now in credit for miles and climbing especially with Mark and Simon from the previous weekend!

Back at the car park, a line Steven never thought he would hear in response to his ‘well I’ve earned an extra large G&T tonight’ was Russ with ‘there’s a glass of prosecco with my name on it’!

Thanks to all for joining us on a really grand day out!