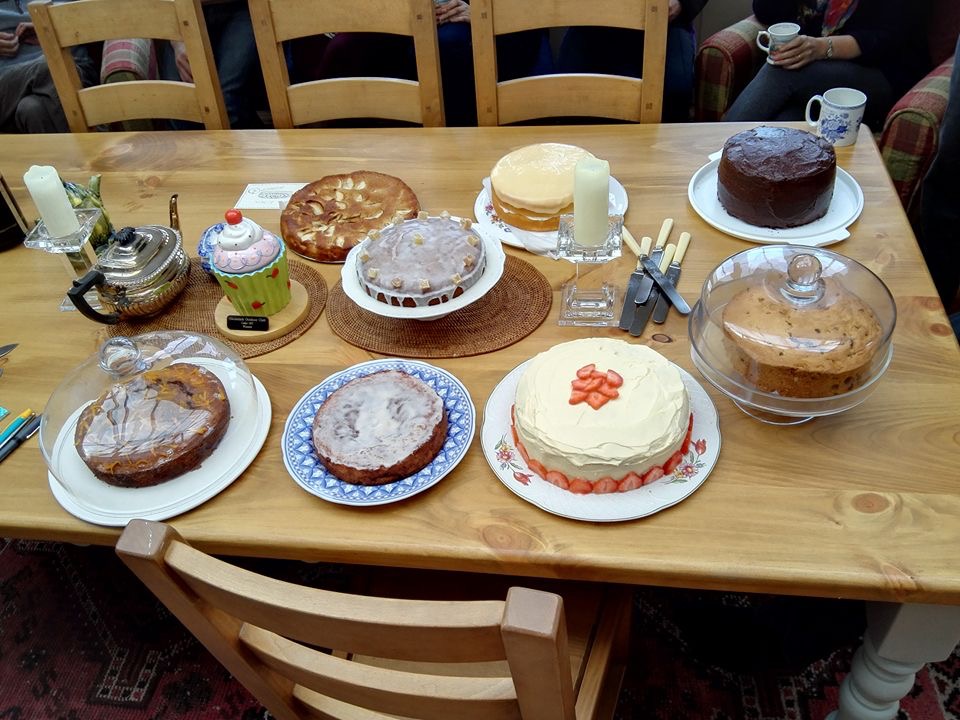 The moment we've all been waiting for - Cake Off 2016 day! But first we needed to work up an appetite so thirteen of us met up in Reeth to climb a few hills and make space for cake. We arrived to discover it was the day of the Scott Motorcycle Trial so I gave up on my planned ride on the north side of the valley and we headed for Apedale instead. A steady plod (with a speedy descent in the middle) took us up to Apedale Head and we then headed around Harkerside on the pleasantly dry stretch of singletrack through the heather. After a bite to eat we carried on around the edge of the hill and then unfortunately lost Alex's friend who was a bit over enthusiastic and headed off full tilt downhill on the wrong trail. I had a go at trying to catch him but by the time I got to the top of the hill he was a speck on the horizon so I gave up. The rest of us continued on various amusing bits of singletrack down towards Grinton and back to Reeth. No cafe stop for us today as we were all heading to Mark and Sophie's place for the Cake Off.

Everyone arrived in dribs and drabs meaning the main event of tasting had to hold for the early birds. However once we were all assembled and everyone had been supplied with tea & coffee we all saw the eight mighty efforts that had been produced for us. The eight cakes were as follows:-

Ginger spice cake by Sas, Triple layer chocolate cake by Mike, Currant cake by Jenny, Chocolate orange marble cake by Rach, Apple cake by Kathryn, Sloe gin and plum cake by Mark, White chocolate orange cake by Sophie, and finally a lemon curd cake by Sarah. Within seonds of the tasting starting the volume went from a 8 to a 2. All that could be heard was mmm, hmmm and then eventually after some of us going round twice to be doubly sure we all cast our votes. During this time Leo & Skye were busy playing with some of Sophie's old toys and despite their age they seemed happy enough! So after some counting by Sarah and Sophie the scores were together and the winners were announced!

This year the top award went to Sophie for her white chocolate orange cake with Kathryn coming a close second with her apple cake. Well done to you both!

It was then decided from these results that Judith and Kathryn would represent our section at the inter section bake off. We all wish you both the very best of luck and look forward to what you enter.

After all the fun we then held the AGM zzzzzzzzz