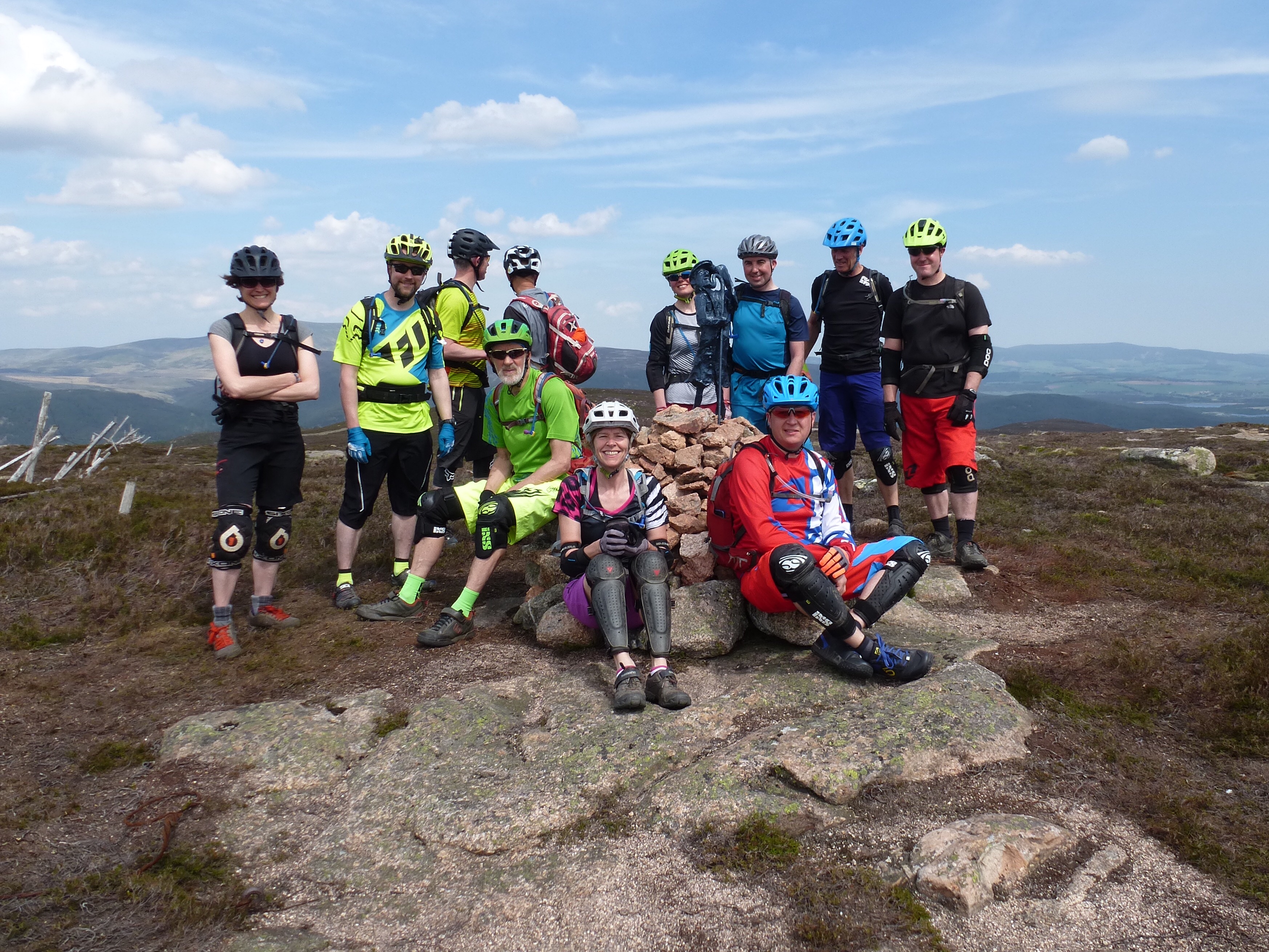 After our successful visit to Ballater last a year an even bigger group of us met up back there for the late May Bank Holiday. Sas, Nev, Skye, Phil, Rachel, Leo, Andrew, Davinia and Arabella rented the same large house a few miles down the road and Alan, Sarah, Judith, Steve, Ian, Scott, Karen, Andy, Mark R, Jenny, Dave T, Mark G, Mike C and Simon stayed in various hotels and the hostel in Ballater.

Saturday; most of us met up on the Green in the middle of the village and set of up a long climb towards Cairn Leuchan. We stopped at the first col and then headed north towards Pannanich Hill for a stop beside a little statue of a shepherd at the top. A great descent down the heathery and rocky shoulder of the hill followed that was much easier to find than our first descent last year. The bottom section is especially amusing with some rocky dropoffs through the woods. Lunch on the village green and then a plod up a nearby hill for another great descent down through the trees on a steep loamy trail. A final short climb up to ride an old footpath and our day was complete. We all met up at the Alexandra Hotel for supper and beer outside afterwards.

Sunday; a big team of us set off from Loch Muick up the Capel Mounth road for a longish plod up to the top of Capel Mounth followed by a long and quite tricky descent down into Glen Clova, Jenny disappeared from sight for a while and finally re-appeared to tell us that she had fallen off and lain in the heather for a while, luckily she was ok to keep going! This year we headed directly up Glen Clova instead of deviating for a new bridge but we then had a stream crossing to contend with as the old bridge still hasn't been rebuilt. People decided on various options - shoes and socks off, shoes and socks on, shoes on socks off and finally, get your husband to give you a piggy back (Judith's solution). Then a tough pedal and hikey bikey up the valley and back up onto the hillside above Loch Muick. Here we met up with Rachel, Sas and Davinia who joined us for an excellent and rocky descent down the back of Coire Chash (the Lightning Strike) back down to the loch. We met Nev, Phil, Andew and the kids here - the little ones had done a great job and pedalled around the loch to meet up with us. After the children had thrown Mark R into the water and he had thrown them into the water we all headed back to the cars after another great ride. Supper at a new restaurant in the village - posher than our usual venues but a good meal.

Monday; a new route we haven't done before today that involved setting of up the long hill towards Cairn Leuchan again, this time we carried on over the col towards Mount Keen. We had a fun singletrack descent down into Glen Tanar and stopped to picnic staring up at the large cloud on the top of Mount Keen. Alan found a large antler on the way down so Steve lashed it to the back of his rucksack and the rest of us steered well clear of him for the rest of the day. Down the valley and then another stiff climb to pick up an old track down from Black Moss for a fast and furious descent. We finished off by visiting the Cambus O'May footbridge that was seriously bent by the floods and is still closed and then some fun singletrack along the edge of the river back into the village. A visit to the local Indian for our last dinner together and none of us were tempted by the dessert described as "a lady toy filled with strawberry ice-cream" although the meal and the top-notch banter from the staff were very good.

Tuesday; people started heading home and those of us that were left did a descent of the local classic The Green Mile - dry and lots of fun.

Altogether another excellent weekend away; full of fun, games and jolly banter. Thanks everyone for playing. Where shall we go next year?