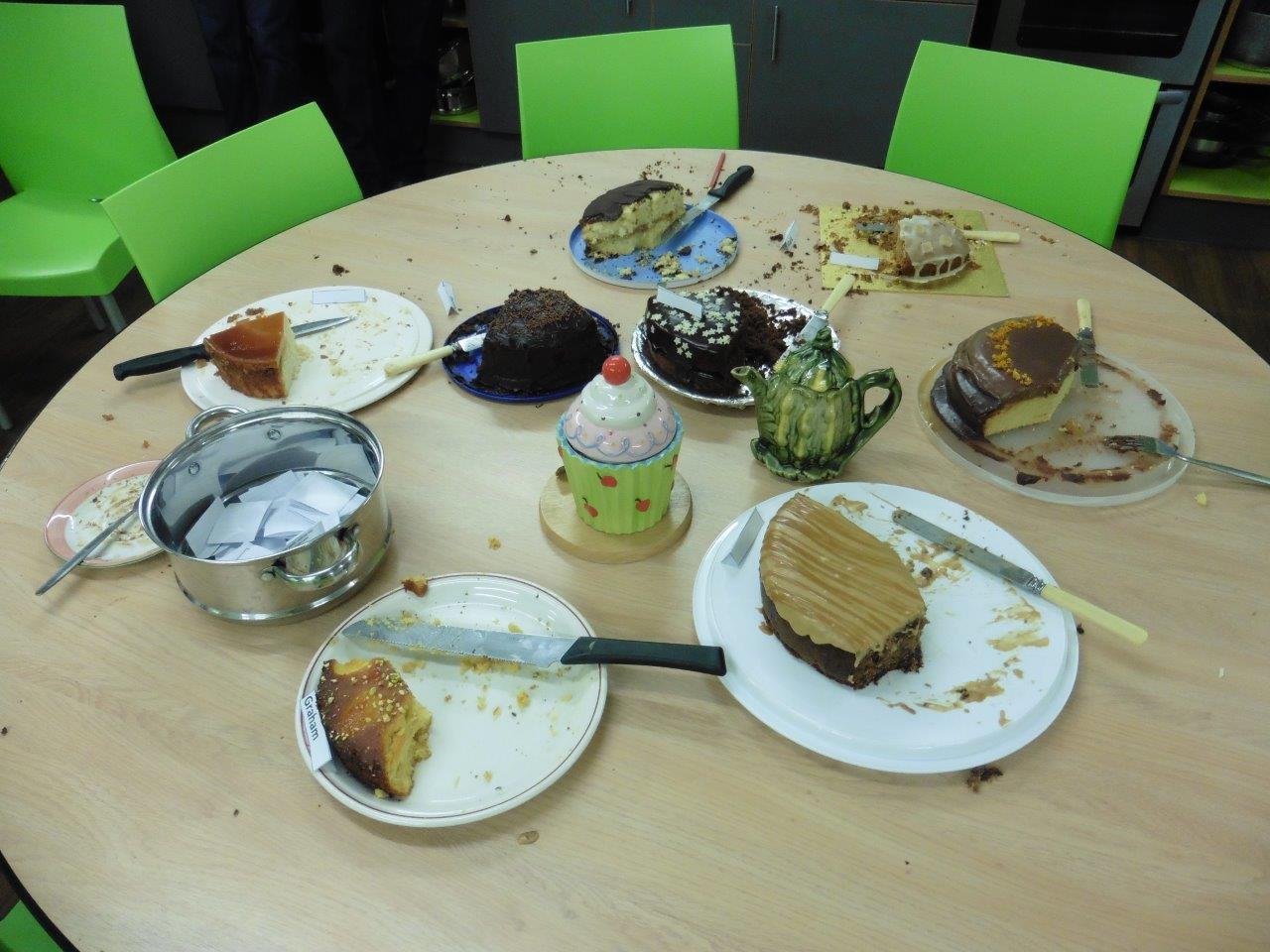 Being last year’s winner (2nd time on the trot, not rubbing it in), it was my privilege to organise the weekend for this year’s cake off. Having had a great time at Castleton YHA in Easter 2012 and knowing it had an excellent drying room we made a return visit with 22 of us staying Friday and 24 on Saturday night. This in turn made us a group of 20 for riding on Saturday and 18 on Sunday but I am pleased to say everyone behaved and we hardly had any mechanicals. Even better we didn’t lose anyone!

Saturday’s ride took us up Mam Tor to start and although the weather tried to be wet, it was reasonably warm and most of the damp was rising as opposed to falling. There were a few casualties in the ruts on the descent towards Hollin’s Cross but nothing too upsetting. The next section of downhill towards Nether Booth was somewhat more tricky; Steven escorted Yvette down; she had a mostly successful ride but was somewhat shaking at the end and claimed a calming hug off Steven - good work!

We then headed towards Hope Cross where the group split and some went off down the Beast while the rest went towards Blakley Hey and took the longer descent. We regrouped to head towards Lockerbrook Farm and down the descent past Hagg Farm; another knee trembler! From here we crossed over bottom of the Beast and headed through the woods to finish on another fun downhill. Although only 16 miles, we bagged over 1000m of climbing rode loads of top trails. It meant we were back in good time to fight over the hose pipe, get cleaned up and get on with the serious business of cake eating and judging.

This year we had 8 entries and a whole load of new taste delights with Saskia’s honey and spice cake; Graham (or Nigella’s) apricot and almond and Mike’s giant jaffa cake to mention but a few. Tasting was serious, a little bit sickly and after 8 cakes the votes were cast. We even had guest judges, Paul Hollywood and Mary Berry to keep us in order and present the trophies. I am somewhat amazed to say I won again (oops). This year it was a sticky toffee and caramel cake. Thank you to all of you for taking part and voting; I am starting to think it is a conspiracy to get me to organise the weekend each year!

On Sunday we headed out again this time towards Hope then up the Roman Road and back to Hope Cross where we all took on the Beast – and survived. While Steven, Dave T and Saskia took an alternative road route to the café, the rest of us headed towards Rowlee Farm and Lockerbrook but this time rode the fast, fun descent to Gores Farm before hitting the café. The next leg was up Grindale Clough to Whinstone Lee Tor then another brilliant downhill from Cutthroat Bridge to bring us out at the Ladybower Inn. As the weather was starting to set in, some of the group headed back to get cleaned up whilst the rest of us headed back through the woods, via an alternative route for the final fun downhill that we had done the previous day . Then all back to Losehill to get sorted out, eat more cake and head home

Thank you all for a fabulous weekend and some brilliant rides.