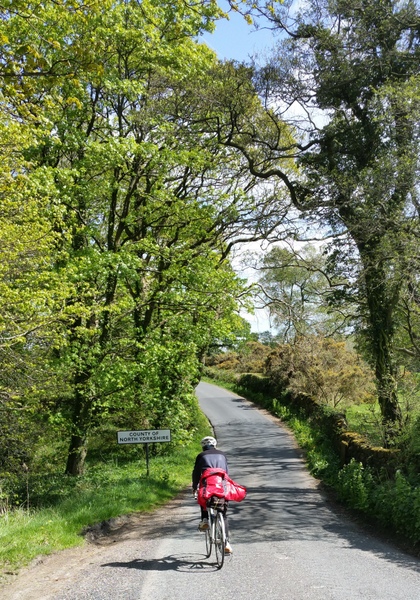 Jill, Andy, Graham, Melanie, Barbara and I set off from Kettlewell on a sunny but very cold day. Part way up Fleet Moss I was overtaken by Steve who had been delayed by having to go back for his cycling shoes. Melanie left us at the top of Fleet Moss, as planned,  to return the way we had come.

The descent from Fleet Moss to Hawes was frighteningly fast with Graham's bike having a bout of tremors. Steve advised clamping the bike with your knees to stop the resonance. It took 2 hours to get from Kettlewell to Hawes - longer than I had planned - it was going to be a long day.

A slog from Hawes to the Moorcock Inn and then into Cumbria and the difficult ascent up and over to Dent Station made more difficut by a landrover and trailer with clutch problems. After another hair-raising descent we stoppped at Meadowside cafe in Dent for an early lunch.

The climb up Barbondale was wonderfully quiet and scenic and then we had a fast 20 miles through the outskirts of Kirkby Lonsdale and into our third county Lancashire. Onwards to Wray and back into North Yorkshire for afternoon tea at Clapham. Our speed more than compensated for the slow progress over the hills.

After tea we cycled to Stainforth and over the hills, at the foot of Pen-y-ghent to Halton Gill and back to Kettlewell. Barbara and I said goodbye to the rest of the party before the last ascent as we planned to meet our sons over in Littondale (they were also faster than me). We did indeed meet our sons who had come up North to do the Etape du Dales the following day. Although not quite as demanding as the Etape nevertheless our ride was sufficiently challenging - 83 miles and over 8000 feet of climbing.