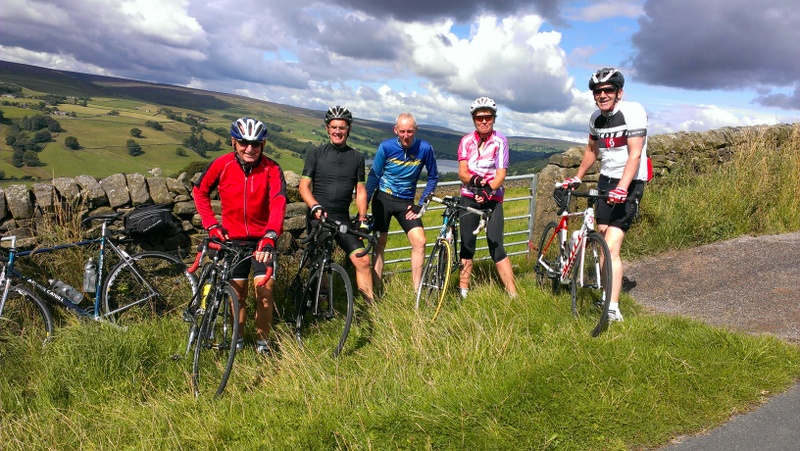 September began with a ride on Wednesday 2nd from Masham to Pateley Bridge. I led from the back whilst Paul, Graham, William and Jenny disappeared into the distance.

The following Wednesday instead of the planned ride from Dent, I led a ride from Richmond to Archers Ice Cream.

On Thursday 10th September seven of us cycled from Appleby to the top of Hartside Pass to see the Tour of Britain. It was a magnificent day, a ride through beautiful countryside, and an exciting finish to the race.

The highlight of the month was the ride to Edmundbyers on Saturday 26th returning on Sunday. John led us out via Staindrop, Hamsterley and Wolsingham to Stanwick. There John left us to ascend the very steep Crawleyside Bank to get to Edmundbyers in time to watch the rugby. The rest of us: Yvonne, Paul, Peter, Graham, Ann, Bob and I took a longer and less steep route (but still very hilly) via Rookhope and Blanchland to Edmundbyers (where we met up with Carol). On descending to Rookhope at least two of our party exclaimed that it wasn't quite as bad as they expected. I then disappointed them by telling them that the real climb was still to come.

On Sunday the weather was so fine that we decided to go the very hilly but direct way home via Crawleyside (descending rather than climbing) and Bollyhope to Egglestone and then on to Barnard Castle and home. Ann stated that it was the hardest two day ride she has done in her life. A great weekend with great company - shame about the rugby result.