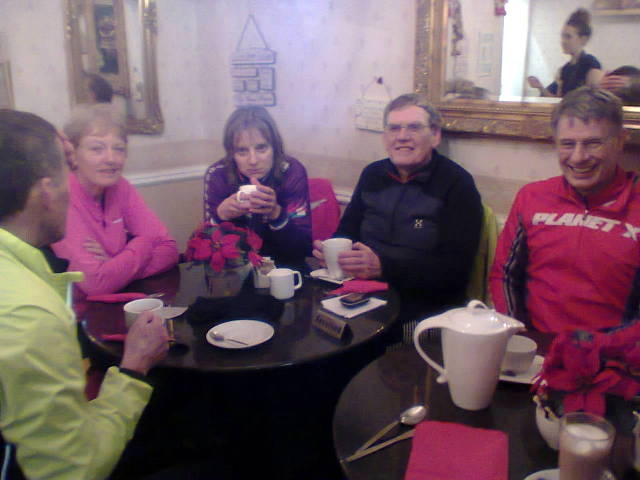 This ride was voted the worse ride this year by my loyal followers (some said the worse ride ever). Nine people (Jenny, Berni, Steve, Peter B, Mark, Melanie, Chris, Barbara and I) turned up on a wet and foggy day to cycle through the beautiful landscape of the Durham pit villages to Sedgefield. I was accused of emotional blackmail in my email when I said that I didn't want to eat alone at No 4 tea room where I had booked a table. I had also said that if we didn't cycle on a relatively benign day (as forecast) then we might not get out until Spring. Anyway people came - many thanks to all my friends (now ex-friends as the weather was far from benign).

We cycled via Ingleton and Bolam to Shildon where we were due to meet Mick. However, Mick had arrived early at our rendevouz point and got very wet and cold and decided to go home again. He texted me to tell me this and to invite us all to call at his house for morning coffee. However, I had a destination to reach - nobody said it would be easy to visit 50 different cafes on cycle rides during the year to celebrate the 50th anniversary of the Club. Sacrifices had to me made so I sacrificed the group and continued onwards through the delights of Shildon, Chilton, Ferry Hill and Fishburn arriving only 15 minutes late at No 4.

The tea room had reserved us a table - very necessary as it was very popular. We gave No 4 an overall rating of 26 out of 35 (74%). Service was great - they were very considerate to 9 very wet, tired and miserable cyclists. The food was good and considered to be excellent value for money. We only marked it down because it was cold, crowded, and a bit lacking in ambience but then it was a wet January day.

After lunch the rain stopped and the sun made a watery appearance for all of 2 minutes. We took a flatter and much more attractive route back to Piercebridge via Great Stainton, Heighington and Walworth.

I'd like to say the ride was enjoyed by everyone but then I would be lying. It makes us more appreciative of fine days and the beauty of the Dales and Moors. Although, it may be the worse ride of the year so far, I'm sure we have plenty of time to relegate it. It's a bit like my achievements on Strava. I've been converted to using Strava by my sons and I uploaded the ride to find that I was the fastest rider up Bolam bank this year - I was the only rider up Bolam bank this year. Then yesterday I found that I'm now the second fastest (out of 2) - some bounder cycled up there on Sunday. Oh well, easy come, easy go!