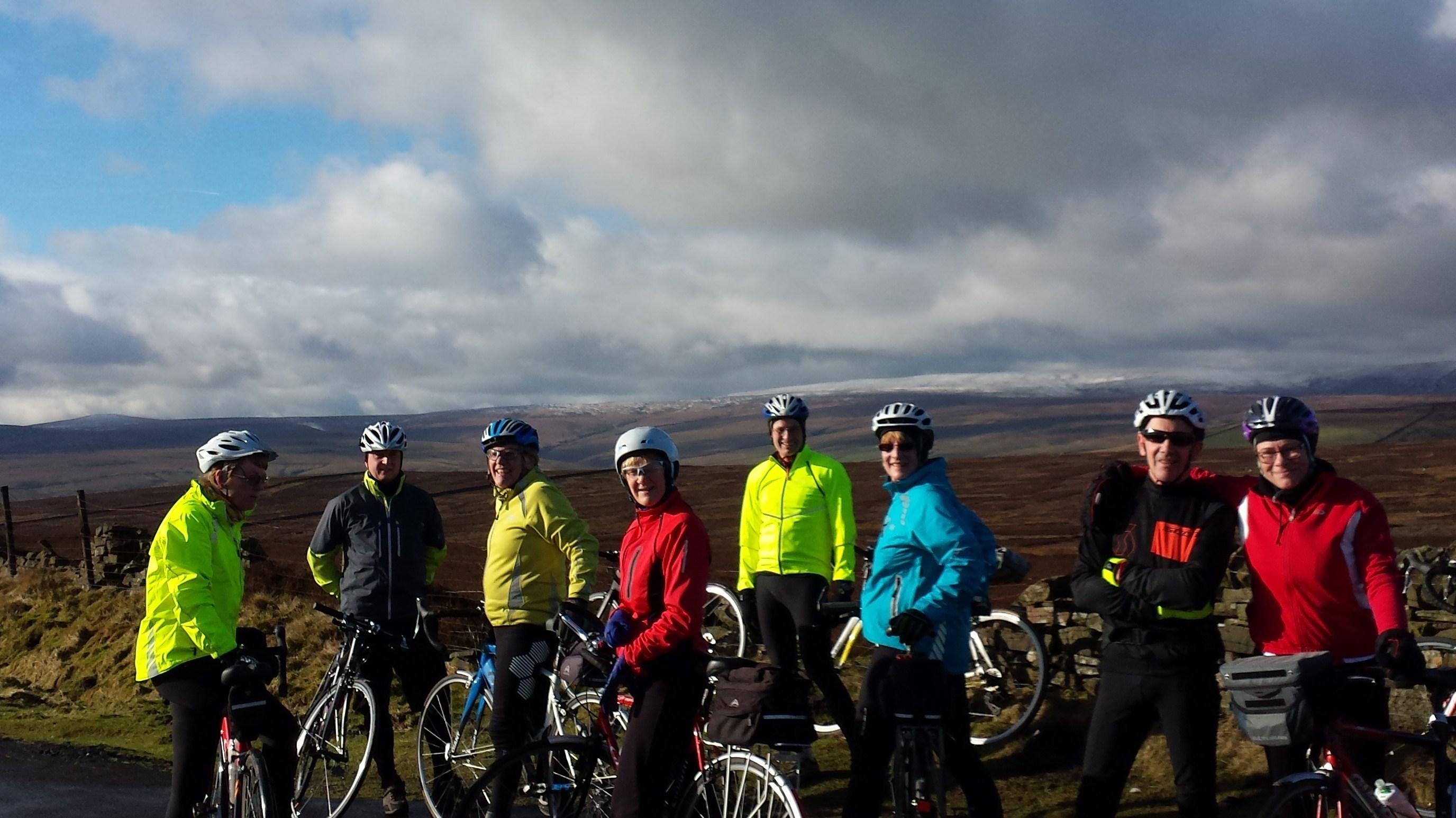 A glorious. but cold, sunny day attracted an initial 10 of us out for a hilly (3,500’ ascent) 33 miles ride over the moors into Nidderdale, passing alongside Leighton reservoir. This had been postponed from the Autumn programme due to bad weather and many thought I was foolish to attempt it again in February, but luckily it turned out just perfect.

We soon dropped Barbara off in Fearby to find her way on the back roads to Leeming Bar for an A1 meeting and made good progress on the long climb up to the moor top for a photo session. There were a few icy patches on the way up so we took it very steady going round the bends descending Trapping Hill into Lofthouse.

Willie, Steve, Mark, Jill and I added the tough climb (signed 25%) up to the Nidderdale road end above Middlesmoor and admired the fantastic views down the dale to Gouthwaite reservoir. The others (Jenny, James, Berni and Yvonne) headed straight for the How Stean Gorge café, soon joined by John who was touring in his old car (due to having a bad cold). We all enjoyed the lunch and awarded the place an overall score of 86%.

Some of us went on to inspect the gorge and thought it (or Honister slate mine Via Ferrata Xtreme) may be worth an SOC group visit sometime (depending on how Mark Russell survives!)?

We returned via the drainage channel infested and steep Wath Lane , although a few who had struggled up it before took an alternative and equally challenging longer route round. It’s certainly difficult to get out of Pateley Bridge without involving a steep hill climb.

After that it was plain sailing to Laverton, Kirkby Malzeard and Grewelthorpe. Just when some thought we were nearly back in Masham we added another climb up Nutwith Lane and on to Swinton. James unfortunately got a pinch puncture descending fast by Swinton Park , but decided to walk back as it wasn’t too far and flatly refused Berni’s taxi.

We were back in good time so went to sample tea and cakes and score yet another café in Masham square – Johnny Baghdad’s, which also came away with a total of 86%. Strangely I seem to have stuck with that score for all (4) my cafes so far!

Jenny and Steve went on to cycle another 10 or so miles to their cars and super-fit Mark was heading off for a mountain biking night ride in Hamsterley Forest .