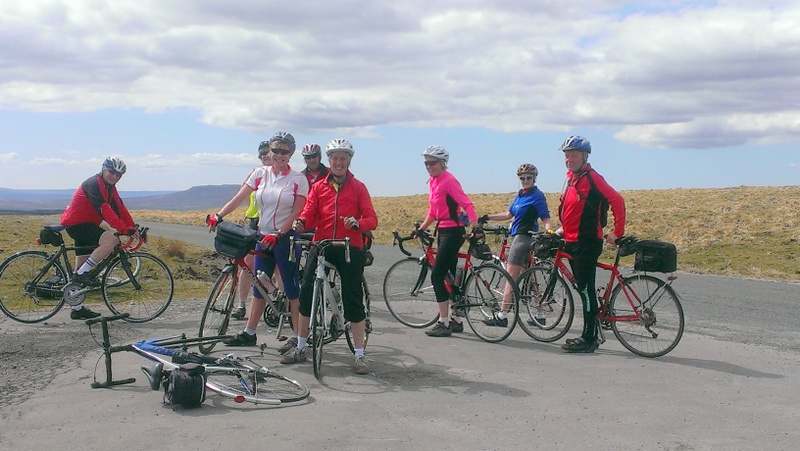 It could have been the prospect of cycling through beautiful dales landscapes in perfect weather, or the challenge of climbing both Fleet Moss and Park Rash in one day, that brought out 9 brave cyclists on this Wednesday ride.

Was it the lure of Fleet Moss or the thought of a café break at the Wensleydale Creamery that induced Jenny and John to set a fast pace through Carperby and Askrigg? Maybe the large scone was not such a good idea because on leaving Hawes Creamery we immediately faced our first challenge climb. Fleet Moss is the highest road in Yorkshire and with plenty of 17% and 20% sections of road, it is a real lung buster. However the ride DOWN following the river through Langstrothdale is long and beautiful with sandpipers, wagtails and curlews serenading our descent.

Into Wharfedale and a deserved, but poorly timed, café stop in Kettlewell for, on leaving the village up a testing climb, we were soon facing our second challenge of the day, Park Rash. Our leader James has previously failed to make this climb due to a cruel wind on one occasion and cold wet conditions on another. However on this beautiful warm Spring day there was no holding him and he completed the incredibly steep double bends with ease [note by James - my lungs were bursting and my legs throbbing - not what I call with ease]. We regrouped at the top and together raced down Coverdale at breakneck speed, slowed only by the odd short, sharp climb that suddenly appears before you from around a bend.

The return via Middleham was achieved at a gallop apart from the last cruel ascent into Leyburn. Congratulations to Berni, Yvonne, Jill, Jenny, Mark, Harvey and John for joining James and I on this ride. James says he can now die happily in his bed having ticked off Park Rash which features in Simon Warren’s “ 100 Greatest Cycling Climbs”.