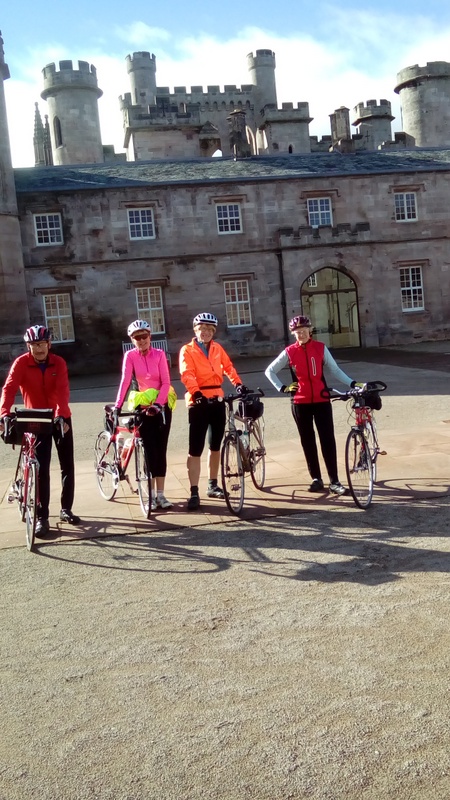 Gentleman John kindly gave Berni a lift to Kirkby Stephen, where we missed the turning to the car park and subsequently found somewhere further down the main street. We had called out to the three early birds, (Jill, Jenny and Yvonne) as we drove past them whilst looking for a place to park. They later told us that the car park would be full now, because a tup auction was taking place that day. Yvonne added that we could sell John as a tup! (The remainder of that conversation has been omitted for decency).

We could not believe our luck when the sun came out and we began to get too hot, such that we removed layers and Jill cycled in short sleeves. Not only were we hot due to it being 16-17 degrees, but also we climbed 2,000 feet in the first 20 miles. We traversed lovely, quiet lanes en route to Shap, where we stopped at the Co-op for refreshments. The roads became even quieter, as we eventually reached the gated roads, leading to Lowther via Bampton and Askham.

Lowther Castle, (see website) was delightful and a most welcome lunch stop after 28 miles. On our more easterly return route, skirting Appleby and Ormside, we again encountered pretty lanes and villages. On reaching Kirkby Stephen, we had done 50 miles and 4,000 feet, which Jill explained did not quite meet the “Gravenor Guideline” of averaging 1,000 feet of climbing per 10 miles in order to be classified as hilly. Never-the-less, we were happily knackered!

Our thanks to Jill for a splendid route, perfect Autumnal weather and a great day out.