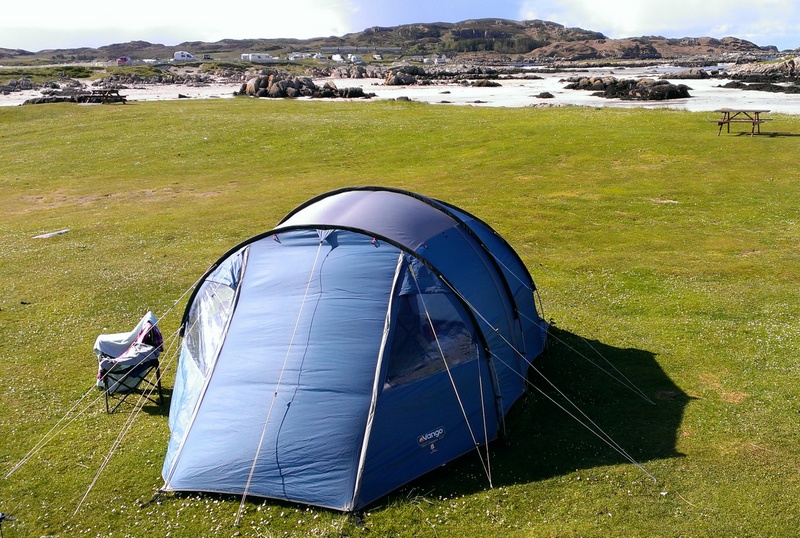 The Canoeists kindly invited the Cycling and Walking sections to join them on their camping holiday on Mull. The trip was fated from the start. Several people cancelled because of the weather forecast and Patrick attempted to go but had a blow-out in his car on the A66. Steve and his son Simon arrived on the Monday night and met some of the canoeists who were keeping warm around a fire. By the time Mick, Barbara and I arrived on Tuesday afternoon the canoeists had all gone home - we passed some of them, coming in the opposite direction on the single track road, fleeing the island and the weather.

The campsite at Fidden Farm was in a beautiful location but faced the unrelenting wind coming straight off the Atlantic. It was very cold, wet and windy. Barbara and I had just been roasted at 40C in Spain and were now frozen with an air temperature of 4C but feeling much colder because of the rain and wind. Simon had to return to uni leaving Steve, Mick, Barbara and I to cycle up the west coast of Mull to Salen and back. The route was beautiful along the coast with magnificent coastal and mountain scenery. It was relatively dry on the way out but poured with rain on the way back. "Which is Ben More?" asked Barbara - "It's the one we can't see! I replied.

On Thursday Mick, Barbara and I took the ferry to Iona and walked up the highest point on the island - great views. We met up with Steve back at camp and decided to go on a late afternoon/early evening ride. Mick's cycling shoes were still wet from the previous day's ride so he put on his walking shoes. "I'll meet you at the wash room" said Mick. 5 minutes later I cycled to meet him but couldn't see him. Then I heard a voice from below me - Mick was laying on the floor - he had stopped outside the wash room but had been unable to get his feet out of the toe clips because his shoes were too wide. He had then fallen sideways onto a parked car and was clearly in agony. The car driver and a passerby helped get Mick up but he was in no state to cycle. We took him back to his tent and after the rest of us did a short evening ride to a beatiful sandy bay we returned to see how Mick was. He was in great pain with a suspected broken rib(s). We took him to the pub to recuperate. That night he slept in his car and the following morning Barbara took him to the local GP who sent a fax to Mick's insurers who arranged for a driver to take him to the ferry and then for a vehicle recovery lorry to take him home from Oban. Mick fortunately had two breakdown policies. The first did not cover driver incapacity but the second with Aviva did - it's worth checking your policy. Back home and after another night sleeping in the car because his bed was too uncomfortable, Mick went to his own GP who confirmed a cracked rib.

Meanwhile back on Mull, Steve, Barbara and I decided to abandon the cold and wet of Mull and return to the mainland. I think the hail storm was the final straw. We were thwarted in this ambition by lack of spaces on the ferry - our car was reserved for Sunday. Mick's driver had just driven straight onto the ferry shouting "make way - broken rib!". Instead of returning to the mainland we drove up to Tobermory and found a very pleasant more sheltered campsite to stay for 2 nights. On Friday night the weather was good enough for us to cook our first meal of the holiday -  we had eaten pub meals the previous 3 nights. We ate the meal in a very pleasant wooden shelter on the campsite equipped with a fridge and electric kettle. We also had an excellent evening ride out to Glengorm castle.

Our ride on Saturday, in the dry and with some sun, along the Northern coast to Dervaig, a minor road to Salen, and then up the western coast and back to camp along the northern coast was glorious. We were thankful we had not abandoned Mull. However, it did rain again that night so we took shelter in the Indian restaurant in Tobermory. We returned home on Sunday. Mull had redeemed itself and I'm already thinking of a return trip. It is so beautiful when the weather relents.