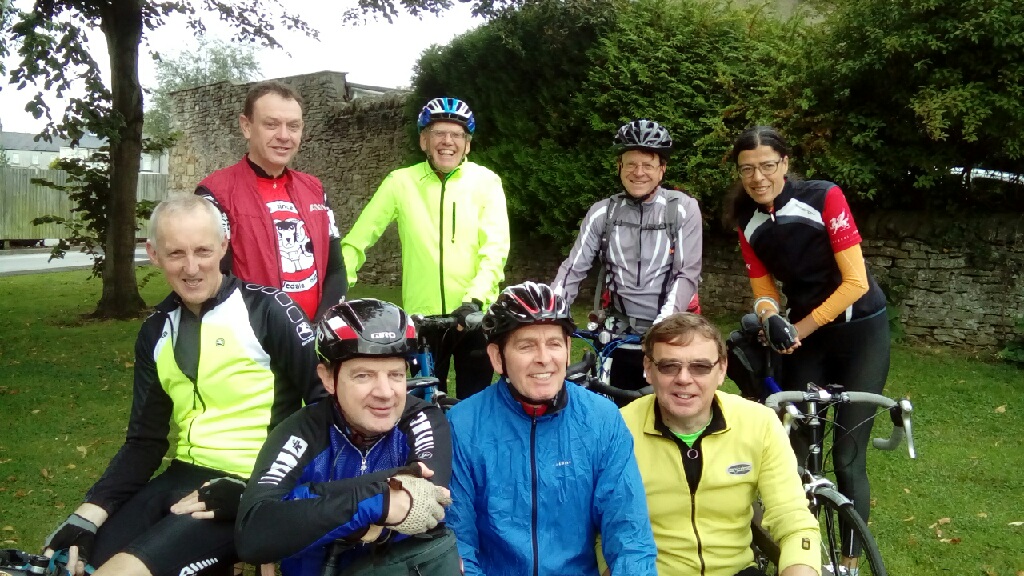 It was a cool bright September Sunday when nine people gathered at Nun’s Close – and then Tony arrived so I had to take another photo as evidence that he was with us!

For a slow’un like me, it seemed we covered Richmond to Reeth at a fair lick, but then as James commented, the peloton would split as soon as we reached the hills. We thought we couldn’t say “sort the men from the boys”, but “sort the wheat from the chaff” would be ok. (I think that means I’m chaff).

The café at Muker provided a welcome feeding station and it was just about warm enough to sit outside. This was just as well, because the only space inside was soon nabbed by MTV (Mick, Tony and Val). The other seven hardy souls spread themselves across three tables outside and as a lady took an order from Tim and I first, she told us that she serves the handsome ones last!

Whilst awaiting our food, we took to admiring Roly’s physique and his helmet. This led Terry to suggest that with such a sturdy helmet, Roly could be fired out of a canon or some such canon stunt.

The start of the Buttertubs soon sorted the wheat from the chaff. I don’t really mind being the chaff so much as James’s utterance of indignation that he was being overtaken by me! Admittedly, overtaking this way round hardly ever happens. In any case, we were right at the back with Mr Smith above us in the far distance.

Having mastered this ascent and enjoyed the descent, we turned left towards Askrigg where we snook into the café just before it closed. Paul went ahead and Terry also left us at that stage. The remaining 8 of us headed back to Richmond via Preston under Scar.