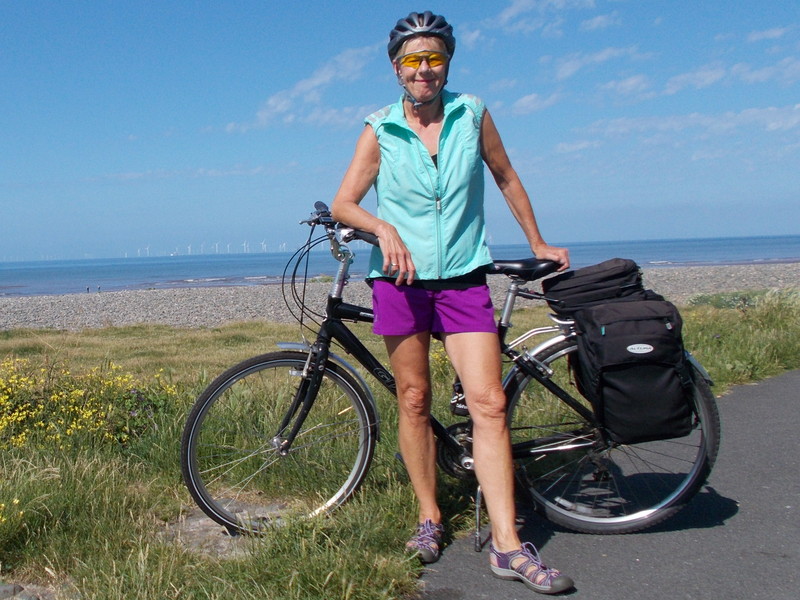 We drove to Barrow in Furness on the afternoon of Saturday 17th June, and checked into our room at The Crofters. We then drove to Walney Island to recce the start of the route, followed by a walk along the sand. We had an ice dream in the sun overlooking the Irish sea and spent some time wandering around Barrow town centre.  We had an early evening meal at Wetherspoons and returned to our B & B.

Sunday 18th. – A gloriously sunny day. We packed up our gear and loaded the panniers, leaving the car at The Crofters. We cycled through the centre of Barrow to Walney Island and asked a passer by to take our photo at the start. Having had a room only situation the night before, we were ready for breakfast and Morrisons café did not disappoint ! The route by the shipyards was very interesting and we were soon on to the path out along the bay with great views across the sands – the tide was out. We left the coast and travelled lovely country lanes to Leece and Bardsea. As we approached Ulverston, we saw Conishead Priory where there is a Buddhist Temple. We enjoyed tea in the gardens in wonderful sunshine and then visited the Temple where we watched a video about the history of the Priory.  This was followed by a guided tour of part of the old house. We continued on to our B & B which was excellent and enjoyed a meal in a local pub in Mediterranean conditions. Carol had her photograph taken with the statues of Laurel and Hardy ! – 26 miles

Monday 19th – A nice breakfast at Rock House and another sunny warm day. The route out of Ulverston was hilly but on lovely country lanes. We lost our way a bit around Greenodd but with the help of some locals we found our way onto the bridge across the estuary (honestly, it wasn’t obvious !). The hill over the moor to Cartmell was steep and long and was challenging in the hot conditions with full panniers. We drank a huge amount of tea, juice and water during the day. We had a nice café stop at Cartmell and cycled onwards to Grange over Sands where we had a milk shake. We arrived at Levens very hot and tired having cycled 31 miles. Our B & B owner John kindly drove us to the Hare and Hounds in the evening where we enjoyed a bottle of wine and a good meal.

Tuesday 20th  - We left Levens in light cloud and it was slightly cooler – perfect cycling conditions. We passed by Levens Hall and took the cycle route along the flatland by the estuary and arrived at Arnside, then on to Silverdale for coffee. The sun was shining and we headed for Carnforth where we had an “unnecessary hill” – we could have taken the flat route on the main road ! Once in Warton, we joined the lovely canal towpath for several miles, cycling leisurely along by some interesting canal boats and lovely houses with beautiful gardens reaching down to the canal.  We continued on to Morecambe and our B & B, Yacht Bay View – we were on the top floor and it was very hot with a lot of traffic noise from the road down below. The owner suggested we had a meal at the Morecambe Hotel and the food was brilliant. 25 miles

Wednesday 21st – There had been rain overnight and we started with rain jackets and pannier covers on. After the obligatory photo with the statue of Eric, we left by the promenade path and joined route 6 to Lancaster. We completed the route by cycling to Glasson but did not hang around as the rain was steady. We returned to Lancaster by the main road and when we arrived in the town, lots of burglar alarms were going off and it transpired that there had been a massive power failure throughout the town. We managed to get on the train to Barrow minutes before it left the station and really enjoyed the scenic route back to the start. We cycled the 3 miles back to the car and by now, the sun had come out again as we completed our adventure. 16 miles

All the arrangements which we had made in planning the trip turned out fine apart from Carol’s intention to only have a whisky on the last night !  We thoroughly enjoyed the ride which was interesting and varied. 98 miles in total.