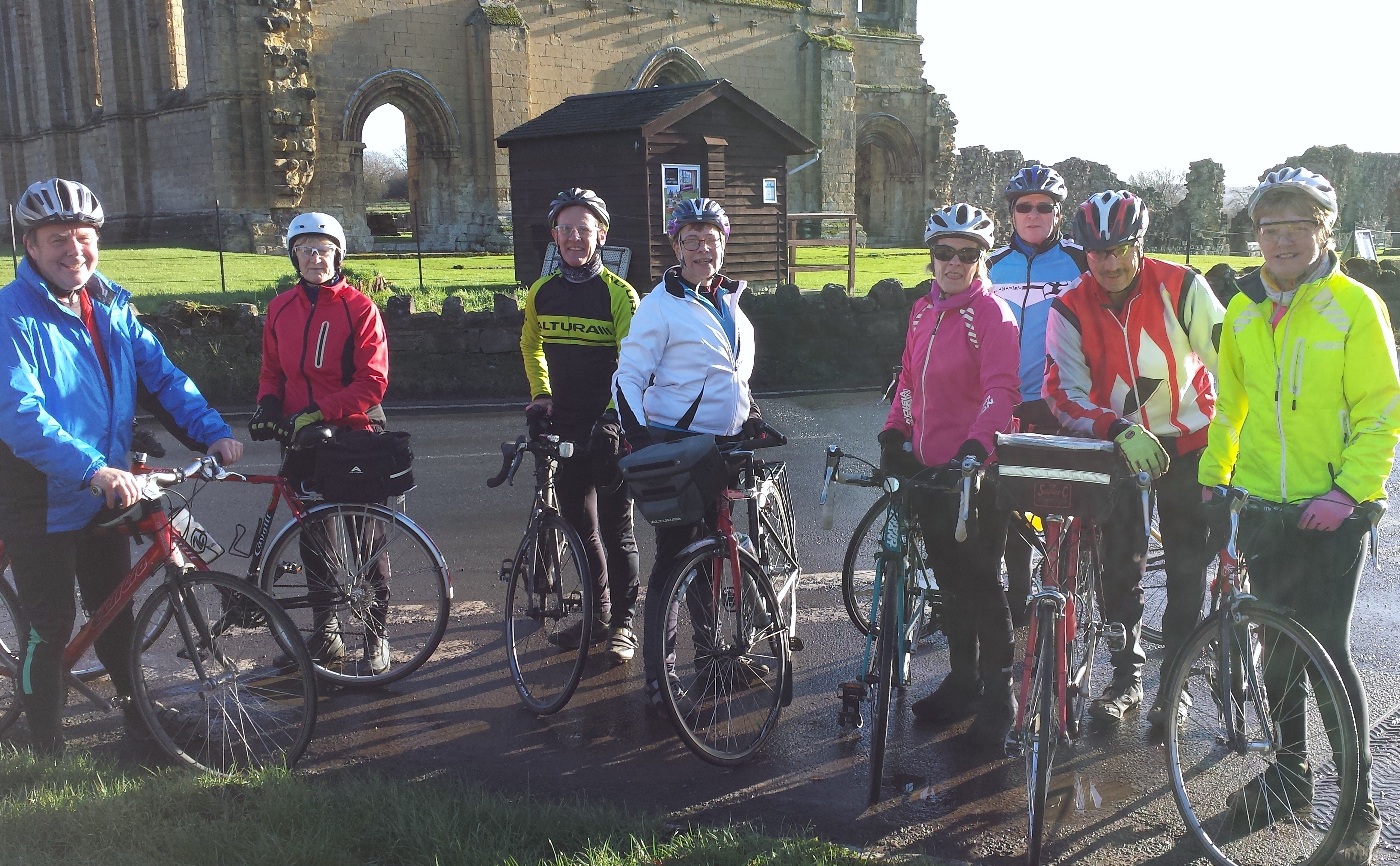 After a long spell of wet cold weather a good dry forecast and sunshine tempted eight of us out from Thornton-le-Moor for a c40 miles ride.

Some brave souls even added extra miles to/from Brompton/Northallerton. We got together with the usual odd latecomers in Knayton and quickly followed the undulating Hambleton foothills round to Felixkirk and Sutton under Whitestonecliffe.

More ‘undulating’ riding on to Kilburn and a glance at the White Horse, but hungry tums decided it was best to leave my suggested climbing of the bank and Rievaulx Abbey for another day and proceed as ‘shortly and flatly’ as possible for lunch at Ampleforth via Coxwold and Byland Abbey, where we had a quick photostop courtesy of lone cyclist Tim, who of course we encouraged to join SOC.

An excellent light lunch was enjoyed in the Abbey tearoom on well polished Mouseman furniture, plus a kind invitation to hear young musicians playing in the hall, which Yvonne enjoyed on her way for a tinkle.

I discovered a puncture but blew my tyre up and hoped for the best. Unfortunately this didn’t work, but knowing the many return miles to go, just kept pumping.

We returned with a few more little hills via Oulston, Husthwaite and Carlton Husthwaite, and soon after Bernadine had problems with her rear tyre coming apart. John fettled it, but descending towards the A19 she reckoned it sounded bad and then it let out a shocking big bang which brought us all to a sharp halt. Mark kindly performed the rescue honours riding directly back up the A19/A168 to get his car.

The rest of us made it back in small groups in the fading light via Dalton , Sowerby and Thornton-le-Street, rather than the planned Kirby/Newby Wiske quiet roads. Probably just as well as I could sense some discomfort as I’d rather stretched it to c45 miles and otherwise it would have been nearer 50 and getting dark - and even worse for those adding the extra miles home.

Ride led by and article wrtiiten by Graham Banks