80 miles with 4 Castles from Masham – on Monday 9th May 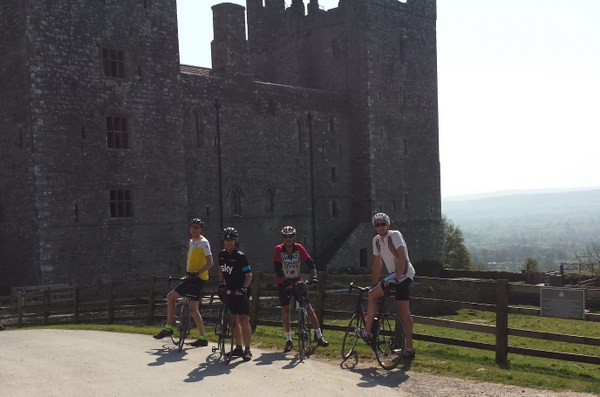 A pop-up ride on another surprisingly warm and sunny day, was put on offer by me to recce the Yorkshire Pedalthon organised ride taking place on Friday 20th May from Theakston’s Brewery in Masham.

John Hallett, John Waldron, Willie, Steve R, Martin (from Ripon CC) and I enjoyed a long hilly ride up Wensleydale on the quieter roads passing by Middleham Castle (and some very frisky racehorses) and Bolton Castle before calling at Askrigg for elevenses.

Good views were admired and a strong wind helped us along and over the Buttertubs, but then we hit the head wind on the return down Swaledale which slowed the pace.

Lunch was enjoyed outdoors at the Dales Bike Centre, which we didn’t score, but it was as good as ever and definitely warrants a 5 on ‘cycle friendly’. Martin returned to Masham via Grinton Moor to add more challenge but the rest of us stuck rigidly to the official route passing by Hornby and Snape castles.

We managed another necessary (after 70 miles) refreshment stop at Thorp Perrow Arboretum café in the garden with plenty of tea and ice cream, but unfortunately again the game was not refereed. I seem to have led several rides recently with no café scoring (partly due to low attendance), so I’d better pull my socks up and take a pen and paper in future!

We all felt pretty tired on return to Masham after pedalling c40 miles into the wind, prompting three of us to take a table in the sun outside the King’s Head for a well deserved final round.