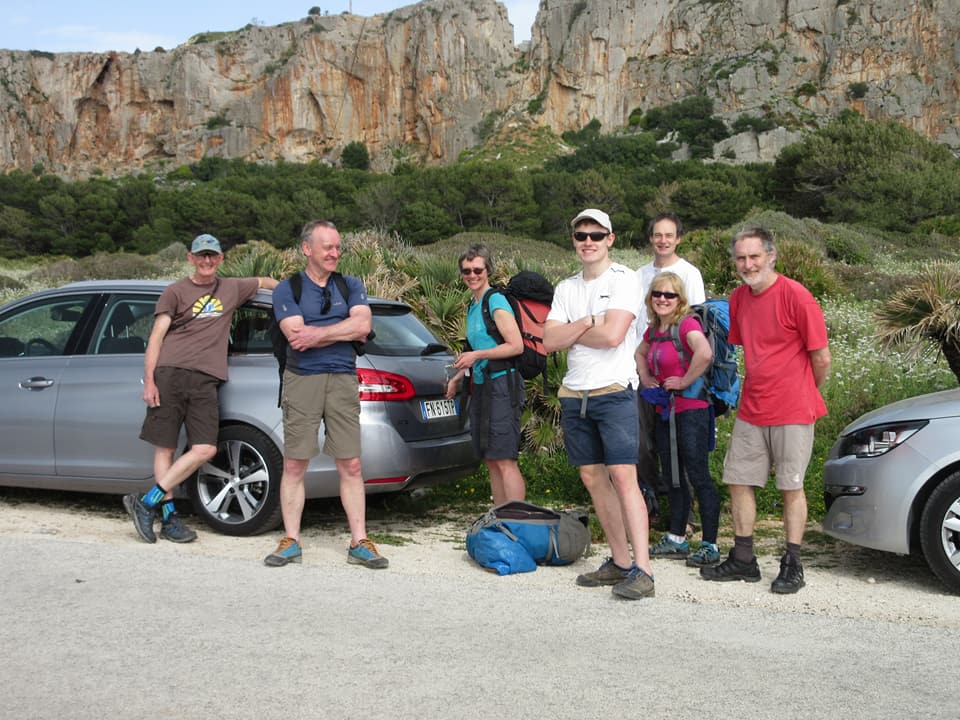 Phil had been struggling patiently since January with emails about venues, dates, flights, and accommodation, but eventually eight of us signed up to a plan, the other seven being Janet, Harry + Sandra, Paul + Finn, Dave, and John. Our destination was San Vito Lo Capo on the north-west coast of Sicily with the promise of sun, sea and extensive cliffs with lots of accessible sport-climbing. After convening at Sinderby airparks, we set off for Stansted for the evening RyanAir flight to Palermo, collected our two hire-cars, and successfully arrived before midnight somewhere close to our villa in the hamlet of Macari. Unfortunately, it then took us quite a while to find the villa and to contact the agent, but we got inside eventually, and attacked some welcome bottles of wine. Actually, it was a very nice villa, spacious and with terrific views along the coast and up into the hills, and delightful sunsets (pics on Facebook).

We conveniently made 4 pairs for climbing, the venues were nearby, and so next morning we were all set to go. Did I mention supermarkets yet?  No! Maybe better not, on reflection. Anyway, the climbing was generally of high quality and easy to find. The limestone was somewhat ‘finger-ripping’, but (mostly) nicely grippy for feet. There was climbing for everyone, although guidebook grades were not always consistent. Paul lamented that he climbs a grade higher at Kalymnos. Phil “spent all week intending to do a 6a”, but “either spent too long warming up or peaked too early on a stiff 5c or just chose the hardest 6a on the crag and dogged my way up”.

As usual, Harry found something memorable. “Route of the week for me * was Sposerò Pippicalzelunghe 6a+ at Sector Bunker. The route follows a “mildly” overhanging chimney/crack system with some great bridging and jamming moves. “Keep going and remember to breathe” was the mantra as arm strength began to give out. Luckily I made it to a semi-cave and a rest. The finish involved a swing out to a blank-looking wall with a lower-off in the middle of nowhere. Wow, it was exposed! Luckily, once committed, some wonderful holds became evident and it was done. Phil opted to top-rope. I removed the upper quickdraws but left the bottom ones in to give Phil a bit of anti-swing pro. On letting go I swung out from the crag about four times further than expected. Crikey, that explained the pumped arms. Phil, our trad jamming specialist, fairly cruised up and scarcely seemed to break sweat. In the guidebook the route gets a justifiable “strawberry” symbol (reserved for the best of the best) but on the UKC website it only gets one or two stars, the misers!”
[* So Harry will marry Pippi Longstocking?]

We had a few small dramas as usual, but nothing too serious. I was making my way up ‘Doc’ (5c) on day 1 when Finn suddenly appeared next to me, hanging upside down, having plunged off ‘Happy’ (6a). Definitely won the ‘lob of the week’ award. Interesting rope burn on the back of his thigh. I wonder if he still has the scar.

It was very hot some days, sometimes too hot for climbing! The visit to a Gelateria was a welcome treat at the end of the afternoon. The coastline was very rocky, and so my snorkelling gear was redundant, but by day 3 some of us were keen to take a break. Harry and Sandra took a walk around Riservo Monte Cofano, while Phil, Janet and I hired rather basic mountain bikes and did a relentless hill-climbing circuit. Our road back from Badia over the mountain pass to San Vito was steep, gravelly, bouldery and deeply rutted, but we made it without mishap. We all finished climbing early on day 4 and drove up to the medieval hill-top town of Erice which we could just about see from our villa. It is a tourist hot-spot, but nice for a quiet evening wander. On day 5 we all did a short (Harry and Sandra) or longer walking circuit around the Zingaro nature reserve. Very pleasant. It was ‘orchid city’ up high. Paul was in his element identifying some of them. He seized the opportunity to explain in graphic detail how the ‘Naked Man’ orchid gets its name to an unsuspecting Frau who was unlucky enough to be passing by. After meeting up again with Harry and Sandra, we all made our way back along the coast. They had found a sheltered cove with a sandy beach, and so at last it was the day of the swim – for Janet and me at any rate - the day of the paddle for the wimps. Too bad that my snorkelling gear was back at the villa, but I had goggles and so happily chased lots of little fishes for a while. We had a late flight back from Palermo on day 7, and so we got in another half-day climbing. I saved my fall for my very last lead on the last day, losing my (ungrippy) foothold on ‘Spigolo’ (5c). The rope cut a deep gouge on my middle finger – just a small scar now. Must learn to do better falls. The drive back from Stansted to Sinderby was gruesome in the early hours of Sunday morning. Well done, the drivers, Phil, Janet and Harry. Thanks to everyone for making another great week, to Dave for cooking 3 meals for everyone, and Phil, once again, for organising. The scribe has been a bit slow in his duties, but hopefully he will be forgiven.