Sardinia was the destination for the latest S.O.C. climbers trip and my first.

There were ominous signs as we left on Saturday morning Harry laced up with pain killers for a bad back and Sandra having to pull out at the very last minute when her daughter was very ill. Nine of us then arrived at Caglari airport in the rain and had the windscreen wipers on most of the journey to Cala Gononi. We had afew worrying moments finding our apartment empty and deserted, but the owner Franco duly arrived with his interpreter who explained( with difficulty) the extremely complicated local waste recycling arrangements. We finally settled down and relaxed  with the wine and beer Franco had bought for us in what tuned out to be a very pleasant apartment.

The next day the sun shone and we sat on our balcony a stones throw from the Mediterranean eating breakfast. The holiday had begun!

Cala Fuili: A local crag seemed the obvious option for the first day. Cala Fuili is about two miles down the coast with climbing yards from the beach. We split into three teams to start with all of us stating on low grades and Harry proceeding cautiously due to his back stayed with the B and C teams rather than heading off with Ray, Mark and Calum who quickly moved up to 6b and 6c.

La Poltrona: Which means "The Armchair" a huge amphitheatre of rocky slabs just above Cala Gonone. We formed into roughly the same groups  as the previous day, with Mark, Calum and Ray heading straight for the 6bs and the rest of us on the easier right hand wing of the armchair. Worming up on grade 4s including a first lead for Berni and a first lead of the week for John who was proceeding cautiously due to his golfers elbow.We joined forces again for lunch(we had to really, the bread was in one sack the tomatoes in another the salami in another etc.!) After lunch Mark Calum and Ray went to climb Grillotalper Andino  two pitches 6a, 6b.(photo) While the rest of us upped our game with Dopo Il Pesco 5b, Hey Jude 5c, Sono Forse 10? 5b 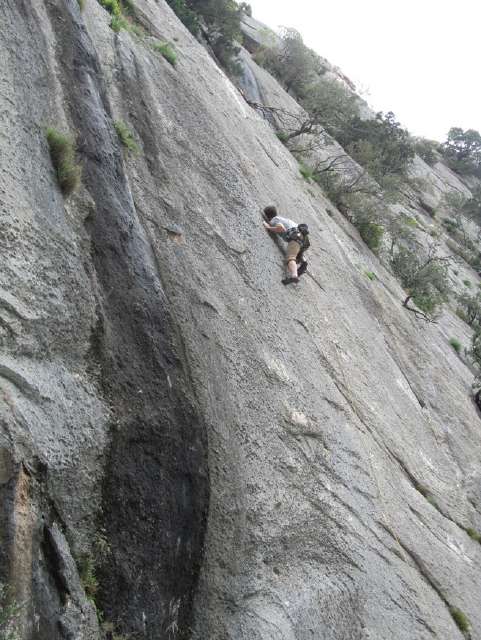 Monte Bonacoa: The hire cars were put to the test on the track to Monte Bonacoa a rocky outcrop near to the top of the ridge separating Cala Gonone with the rest of Sardinia. We left the cars in a rough car park with amazing veiws up and down the coast. A five minute walk led us to the crag which has a prominent nose and a route taking an unlikely line up it at 6a+ (despite it`s character Senza Nome, No Name!)

The rest of us moved round to some easier climbs where we tackled various routes at 5a, b, and c 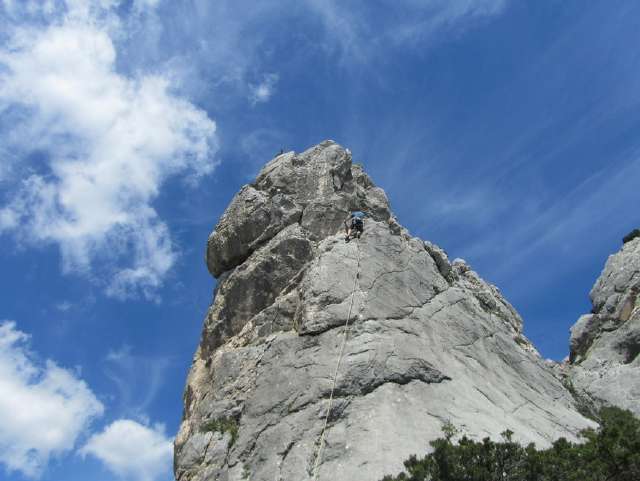 Buchi Arta: another long bumpy track leads to Buchi Arta, a crag long kept secret by the climber who developed it. His imagination in developing lines on a crag was not equalled when naming routes, most of the had a number and "Senza Nome"(no name) However the routes had plenty of character which encouraged me to lead my first 6a of the holiday and Anne to push her grade up to 5c.

We finished the day trying to get the perfect picture of Harry on a very steep 6a the distant  valleys and rocks being an excellent background.

The keenest climbers/beach bums hired a boat to get to Cala Luna further down the coast.Not needed as a driver this allowed me to do some cycling. The long snaking road up to the tunnel through to Dorgali had been calling me like a siren to cycle up it accepting the sirens challenge  I hired a mountain bike with a view to cycle up to the tunnel then follow a track to the top of Mt. Tuili 1000m. The first part on tarmac was reasonably easy, an alpine gradient allowing a steady plod up to the tunnel the track then followed the ridge climbing slowly the rough made this more challenging having to negotiate potholes and boulders while climbing. For the final two to three hundred meters of ascent the track became steeper zig zagging up through the trees,luckily  the steepest bits were surfaced. I finally reached the top where a large radio mast stood. I scrambled on foot  to a view point where I could take a 360 degree movie shot then returned to the bike to eat my squashed sandwiches and banana whilst enjoying the view  along the coast.( a week before in freezing Yorkshire I couldn`t of believed I would be sitting at a thousand meters wearing shorts and not frozen!)

So after much debating the decision was made to hire a boat on Thursday and head over to Cala Luna for a semi rest day! Having secured what seemed a very reasonable price of 70 Euros for the day and with afew minutes worth of instructions off the six (Ray, Harry, Anne, Andy, Mark and Calum) of us went. In no time at all we had arrived close to the beach and with a bit of paddling ‘parked’ the boat successfully for unloading. Unfortunately getting it back out and secured with the anchor meant a chilly swim back to shore for me and Calum!

The climbing on the tower by the pier was fantastic, beautiful slabs with sharp rock and we all managed to get a couple of routes done before heading back to the beach for lunch and a spot of sunbathing. The curfew on getting the boat back meant a limited spell in the Grotto, but we did at least manage to get to the top of one steep route before heading back to Cala Gonone on the boat. We even managed to entertain the other beach goers by almost leaving Anne and Harry behind as they kindly pushed the boat off but then struggled to re-board as we headed off! 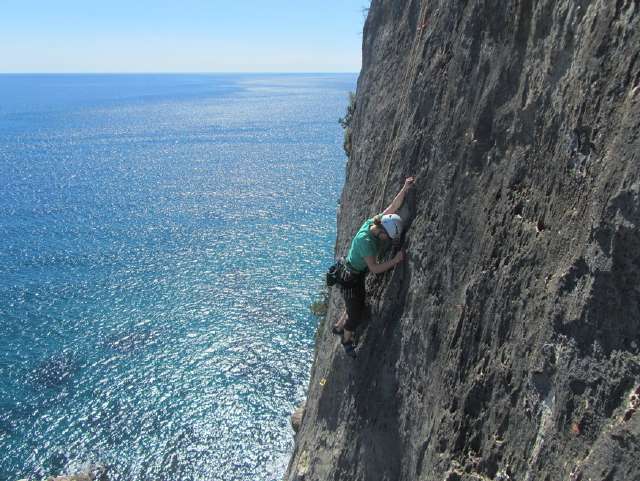 Multi pitch: Whilst the A team tackled the route on Monte Oddeo Andy, John and Berni walked up to the archeological site of Tiscali and Anne and me went to climb "The Sound of Silence" Five pitches  and 140m The maximum grade is 5c but the length of the route and the potential to get lost makes it feel more serious. We did alternate leads Anne now happy leading 5b/c. Niggling at the back of my mind all the way up was the thought that we were going to have to ab sail back down the route when we had got to the top, would the rope get stuck? would the rope be long enough? I didn`t fancy the idea of dangling on the end of a rope all night waiting for someone to come and rescue us next day. As it turned out the rope was long enough but it did get stuck but luckily there was enough spare rope for me to climb back up and free it having to sacrifice some gear to protect my decent to the belay. It was with great relief and satisfaction that we arrived at our starting point several hours earlier, quickly consuming  the last of our food and water before returning to the car arriving just as it was getting dark. As it turned out we were about an hour ahead of the A team but the others had warned the local Pizzeria of our late arrival and we all could feel smug, satisfied,and slightly inebriated on our last night!

So at least for some of us it was decided that a bit of multi-pitch action was in order having had 5 days climbing on single pitch crags. Phil and Anne headed off to the Surtana Gorge to have a look at ‘The Sound of Silence’ while myself, Calum, Ray and Harry headed upto Monte Oddeu to try ‘La Nostra Svizzera’, an 8 pitch F6c up the rather impressive wall.

The four of us climbed in two teams of 2, offering a bit of morale support when required for the harder bits, of which there were perhaps more than expected in what turned out to be quite a sustained route. The climbing was excellent though, again on some incredibly sharp rock in parts. Having put all four of us on top for the first and second British assents and signed the summit book we made a hasty departure back down via a number of abseils. With some abseils upto 70m, it’s always a big relief to see the rope coming down ok, but fortunately we made it back to terra firma with no hiccups, although as I forgot my head torch a walk-out in the dark was required. Still it was a great day and at least for me a brilliant last route to finish off a great trip.

On the final day, several of the party decided to push the boat out (not literally this time) and test the waters at Cala Fuili beach, Phil decided to get a final few miles out of his hired mountain bike, and Callum and Ray took the safer option of exploring the crags further up the gorge from Cala Fuili. Whilst the cliffs at the entrance to the gorge, which we had explored on our first day, are generally slabby wall climbs, there is a very extensive set of cliffs further up the gorge ranging from multi-pitch climbs on the Sector Sperone to steep (hard) stuff in Grotta dei Tritoni, Settore Pederiva and Thailandia. We paused briefly to look at the delightfully named Condom Stress (7a) in the Grotta, before deciding it wouldn't be much of a warm-down route and headed sensibly for the gentler angles on La Tribuna at the narrowest part of the gorge. Cervo Volante ('The Kite', 5+) gave us a nice warm up with a steep juggy finish, followed by Vado, La chiodo e torno ('I Go To The Nail and Back (sic)', 6a) and L'incantatore di serpenti ('The Snake Charmer', 6a/6b). All three were the usual pleasant ~25 metre slabby Sardinian wall climbs to which we had now become (more) accustomed, demanding good footwork and strong calves, with the last one feeling closer to 6b at the end of a very satisfying full weeks climbing. Not wanting to miss the fun (and the beer) at the beach party, we then jogged back down the gorge to test the waters ourselves (well some of us!).